Anura Gunasekera (2018)
My friend Skandakumar, former Chairman of George Steuart's and presently our ambassador in Australia, in a moving tribute to the late Wickrema de Alwis, has quite rightly described Wickrema as a Gentleman Planter Par Excellence. That is the best definition of Wickrema, in my mind one of those rare industry professionals who could be described as a planter's planter.

I did not know Wickrema well and our interactions, for many years, were limited to brief exchanges at occasional meetings. However, over the last few years I have had several conversations with him on the infrequent articles I used to write. Both the content and the points of view seemed to find a resonance within him and I was very pleased, as he was a man of sound judgement and unquestionable probity. He was also fascinated by the History of Ceylon Tea (HOCT) website, on which he had many questions. 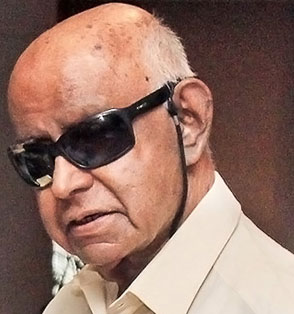 My last meeting with him was about three months ago, when I accompanied Bathiya Jayaratne to Wickremas Madapatha home and spent a very interesting morning with him. One purpose of the visit was for me to show Wickrema how to navigate the HOCT website, so as to get the best of its information lode. As is customary in rest homes of that kind, he was restricted to a single room with a verandah which served as the visitor's area. Despite the space restrictions, the precise arrangements within, which catered to all his immediate requirements, was a clear reflection of the disciplined, highly methodical approach that contributed to his success as a professional planter. Bathiya and I were greeted and entertained with the same decorum as if we had visited him in his estate bungalow.

There was an amusing incident during our meeting which, to me, accurately reflected Wickrema's compulsive sense of order. Towards the end of the meeting his faithful retainer, Saverian, produced the visitors book for our signatures and comments. Wickrema immediately took the book from him and explained to him, in precise Tamil, that the book had been submitted at the wrong moment as the visit was not yet over, and that it should be the last item on the visit agenda! The book itself was meticulously maintained, a reflection of Wickrema's continuing passion for method despite the diminution of his life-style.

To the planters of my era and those of a decade earlier as well, Wickrema set exemplary standards of excellence. Kotiyagala estate, Bogawantalawa where, over a period of about 12 years he established a body of work and benchmarks unlikely to be surpassed, undoubtedly represents the best of Wickrema the planter. He gave the impression of a highly controlled man with a low-key, unpretentious personality, who let his achievements speak eloquently of his competence. Last year, in one of the events which celebrated 150 years of Tea in Ceylon, Wickrema was awarded a recognition as one of the Ten Best Planters; undoubtedly, a well-deserved acknowledgement of the contribution made to the industry by a very modest man who never sought recognition.