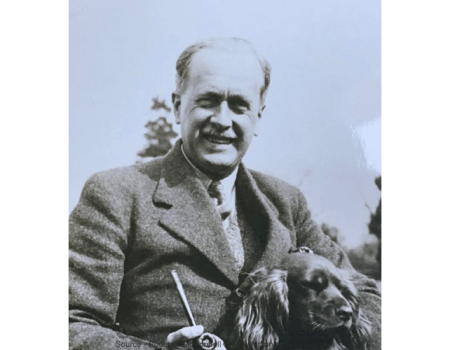 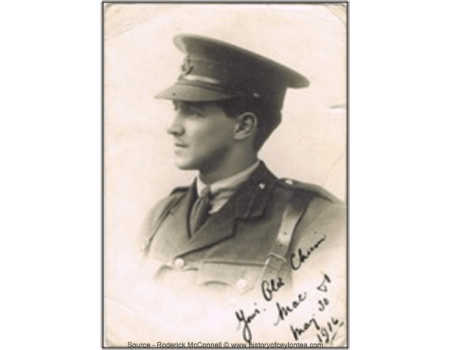 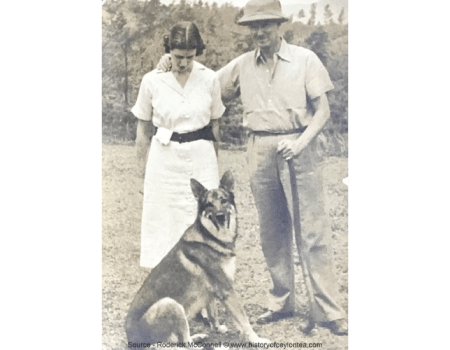 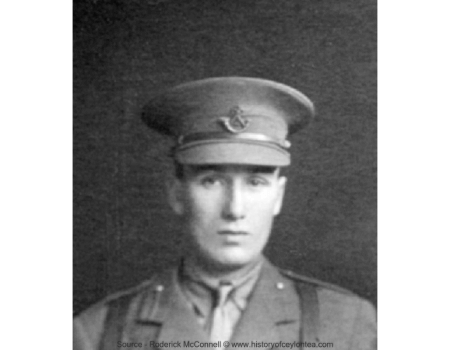 On leaving school he joined the Bank of England but soon tired of this career and decided to immigrate to Australia. When his ship called at Colombo he elected to remain in Ceylon and train as a tea-planter. Sometime before WW1, he joined the Indian Cavalry (13st Duke of Connaught's Lancers {Watson's Horse}) and saw action against Afghanistan on the Northwest Frontier. Soon after the outbreak of war the Indian Cavalry were dismounted and sent to the trenches in France. He was blown up in an ammunition explosion, then had rheumatic fever and was invalid home to be discharged out of the army in 1916. He then decided to return to Ceylon. Now married, Clarence then became Assistant Manager of 'Hornsey' tea estate in the Dickoya district.

During the late 20s he decided to branch out on his own and purchased ‘Nagrok’, an up-country estate in need of development. Access to it was difficult as there were no roads and during the family visits the children had to be carried in litters through the jungle. Clarence’s hopes for Nagrok were never realised, partly because he left Ceylon six years later but also because the Ceylon Government decided that part of the land should be compulsorily purchased to allow a road to be built. Clarence took the matter to court (one of his favourite occupations) and the case dragged on until 1940 when he finally lost. In 1933 the family returned to England.

When my father Ronald and his elder brother Quentin went out to plant in Ceylon, I am sure that it was due to Cousin Clarence’s contact. In fact, I think that father might have ‘Crept’ for him at Hornsey, but I have no proof

Ronnie was the third of six children, (his younger brother ‘Addison' died in infancy). All but one was born in Canada while his father was trying to make a living at farming/engineering. The family came home to England when he was about seven and initially lived in the village of West Isley in Buckinghamshire (1901 census), (his elder brother Edward was the local vicar), then the family moved to 5, Herbert Road, Preston, Brighton.

Ronald's father then re-joined the Army (about 1900), as there was a shortage of Officers for the Boer War (his father was in the Reserve of Officers), and this was why his father returned to England). In 1911 Ronald's father died, by that time the family had moved to ‘Fairhaven’ 160, Old Shoreham Road, Hove. What Ronnie did as a young man is not known. However, when WW 1 started we find him enlisting into the Army, (one of Kitchener’s men), into his father’s old regiment, the Buckinghamshire Regiment, now renamed The Oxford and Buckinghamshire Light Infantry.

He was commissioned 2nd Lt on 11th December 1914, into the 9th Battalion. On the 17th of Feb 1915 he was posted to ‘C' Company of the 3rd Battalion; this Battalion arrived in France on the 1st of May 1915 and was part of the Rifle Brigade reinforcements who were posted at Ypres sector in trenches on the 8th of June. On the 7th of September, on a night patrol he was wounded (shot in the face, right side) and subsequently invalided to UK. On recovery from his wound, he was posted to the 2nd Battalion, (which later became the 11th Garrison Battalion). He remained with them until he was de-mobbed, approx. 1919.

A short while after leaving the Army, he went out to Ceylon to start tea planting (as did his elder brother Quentin E). The first information that I can find comes from the shipping lists and shows that he sailed on the SS Oxfordshire from Liverpool on the 15th of April 1920 for Colombo. A new planter is called a ‘Creeper' in their training period, before being appointed Assistant Manager, or an ‘SD' (which stands for Sinna Dorai - meaning small master), an understudy to an established planter to learn the trade.

Ronnie did this under his cousin Clarence H. Q. McConnell who planted on ‘Hornsey’ Estate, in the Dickoya district (SE of Kandy), Ronnie later planted at ‘Rockwood Estate in the Hewaheta district (1922-23). From the Planters Register he is noted as the Assistant Manager of Le Vallon Estate 1925-28. He is also recorded (1924) as the Planter of Mount Pleasant Estate in the Peradeniya district. From the passenger lists we find him home in 1928 and 1931 for a short stay. In the early summer of 1937 (30 June) he arrived at Southampton on SS Ormonde, his address given was Hove in Sussex (the old family home), this is when he met his future wife (Evelyn) in Worthing; she and her cousin Betty ran a bakery/cake shop.

As was the case with many ‘colonial gentlemen' on home leave, after a short romance he married and took his wife back to Ceylon. Sailing just over a month after they were married; the honeymoon was the three-week voyage back east (6th to 27th Nov) on SS Orford via Naples, Suez, and Aden. He was then Superintendent on a tea estate in the Pussellawa district called ‘Peacock Hill' - 348 acres at 3800 ft.

In March 1939 they moved near Kandy to ‘Old Peradeniya Estate' - 505 acres at 2200 ft in the Hantane district. In June 1945, after the war in Europe was over, but whilst the Japanese war was still in progress, the whole family came home to England for a visit and stayed with Pom (mother-in-Law) at her house in High Salvington, on the downs overlooking Worthing.

In November Ronnie returned to Ceylon to manage ‘Le Vallon Estate group', 1733 acres, in the Galaha district. Evelyn and children stayed in Worthing until their second daughter Alison was born. They then went back east sailing from Southampton on the 9th of July 1946 on the SS Indrapoera. Although a good planter, Ronnie did not get on well with people and was often at ‘odds' with the company (Rajawala Produce Co Ltd.), for which he managed the estates.

This in turn meant that he lost some prime estate positions although he was by now the senior planter in the company. The last estate he had (July 1947) was ‘Wangie Oya’, Nanuoya, in the Dimbula district near Nuwara Eliya - 428 acres at 4200 feet.

The family preceded him to England in September 1948, initially staying at a bungalow called ‘Four Seasons ’in Honeysuckle Lane, High Salvington (Worthing). Ronnie visited the family late ’49 to early ’50 then retired from planting in 1952 and finally arrived back in UK at Tilbury on the 9th of April; by now the family were living at 11, Brooklyn Av, West Worthing.

Quentin Edward McConnell, b. 26-06-1892 in Comox, Vancouver Is, British Columbia (son of Ronald Stafford McConnell and Emma May Lawes), baptized 07-08-1892 in St Peters Anglican Ch. Comox BC, d. 31-07-1968 in Perth, Western Australia. Early days unknown, though he did leave Canada with his father and brother Ronald in 1900 (aged 8. The family went to live initially in the village of West Ilsley in Berkshire (1901 census) at a house named 'The Poplars' – the connection to West Ilsley was that his uncle Edward E. McConnell was the local vicar). After that the family were at 5, Herbert Road, in Hove, Sussex (R.S. McConnell's will) and finally the new house 'Fairhaven' 160, Old Shoreham Road, Hove, Sussex in June 1906.

I next have Quentin sailing from Liverpool (SS Wiltshire) on the 31/8/1912 to Brisbane; he is listed as an MM (Merchant Marine) Apprentice. Did he like it so that he immigrated to Australia?

Next from army records we have him joining up for WW1, with the 15th Battalion Australian Imperial Force, as a private (No 326) and fought at Gallipoli, was shot through both legs, was evacuated to Alexandria in Egypt and then later to England. Once recovered from his wounds and malaria where he was commissioned into his father’s old Regiment, the 9th Battalion of the Oxfordshire and Buckinghamshire Light Infantry (as a 2nd Lt), he later transferred to 1st/2nd Battalion. He transferred to Royal Flying Corp 4/8/17 and was promoted Flight Lt 1/4/1918.

At the end of the war, he married a local girl from Brighton and went to Ceylon to train as a tea planter, and later moved to South India. From the Fergusons Directory of Ceylon, I note he is an Assistant Planter on Dunsinane Estate between 1922-25. I then have his wife Gladys sailing from Liverpool on the 26/3/1920 to Colombo on the SS Gloucestershire. Gladys must have then come home for the birth of their son Fred, as I have her and Fred sailing on 3/3/22 from Liverpool to Colombo on SS Warwickshire, interestingly her destination is given as India.

I next have Gladys traveling home arriving on the 30/8/26 on SS Lancashire. I have him and Gladys (Tibby) departing Liverpool on the 13/10/1933 on the SS Staffordshire for Colombo, Ceylon. As they were in India at this time, I expect that the quickest way to get to Otacamund would have been to go via Ceylon and a trip across the Jaffna Straights to India.

From his mother’s will dated 1936 we have his wife Gladys being made executor of her will and Gladys' address is given as Thiashola Estate, Nilgiris (in the Nilgiris Hills by Otacamund, SW India).

In 1949 after the partitioning of India/Pakistan, he and Tibby retired to Western Australia where their son was living. I note they left Colombo in February and arrived in Freemantle in May, on SS Aagetekerk of the Holland Australia Line. Quentin died in Perth in 1968.