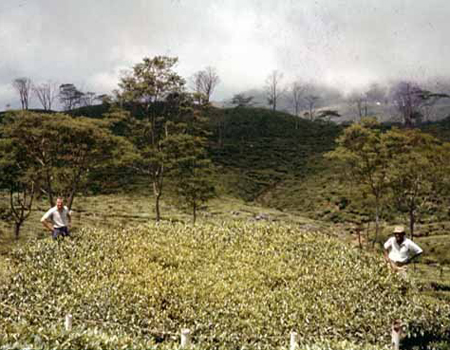 When it was photographed in circa 1962/63, it was about 100 feet in diameter, and when it was pruned that year, there were 294 pruning cuts on completion. This bush was in a field of bushes that were on average far larger than elsewhere on the estate. It was very ‘high jat’, or “vella thaylay” as the workers would call it. It had a single trunk from which spread the branches, which were about a foot off the ground, and for about half their length, about a foot high, though in cross section, elliptical in the vertical plain. The branches were supported in some places and, apparently, the pluckers used to walk along the branches when picking the leaf.

There were many bushes in the field that showed signs of similar growth, but this was special and as it spread over time, adjacent bushes which stood in its way were removed.

The story was that Mr. Masefield, for many years the Chairman of the Companies in London, would sack the Superintendent who killed this bush (at least that is what was thought). Be that as it may, whenever it was pruned, the PD, SD, pruning Kangany, head saw man etc. were always present.

It is worthy of note that this bush, and the field as a whole, was not particularly high yielding. It was noticed that the flush reduced, the further one got from the centre, and this of course was to be expected as sap flow decreases in direct proportion to the distance it has to travel.

Furthermore, unlike the ‘China jat’, the ‘high jat’ is highly apically dominant and therefore, tends to focus its vigour towards the centre.

Originally published in the Dilmah Talking Tea magazine (2009) with picture and information supplied by Ian Gardner.