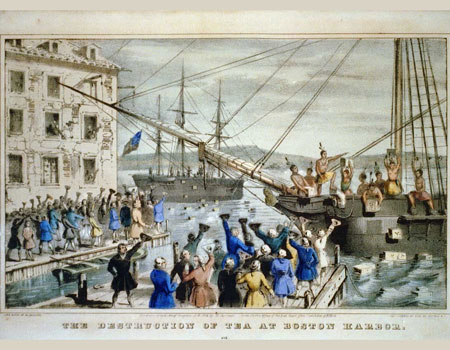 In 1770, Lord North repealed four of the five Townshend Duties but retained the 3d tax on tea. The Tea Act of 1773 was intended to rescue the East India Company from its financial problems and provided that the Company might export tea directly to the American colonies and appoint its own agents to sell it. Before this legislation, the Company had been required to sell its tea at auction in London to wholesalers and retailers; now it entered the retail business itself.

The agents chosen by the Company were frequently colonial merchants who opposed the popular leaders. For example, the "consignees" in Massachusetts included two sons and a nephew of Governor Thomas Hutchinson. This was guaranteed to arouse popular opposition. In New York it was reported that the tea smugglers were the leading opponents of the Tea Act because it made the tea so cheap that they could no longer afford to smuggle. Throughout the colonies there were accusations that the East India Company was a huge monopoly with which no colonial merchant could afford to compete.

The main feature of the uprising against the Tea Act was that the political leaders used it as an issue that might further their own political cause. The first public action was taken in Philadelphia were a series of resolutions was passed, denying the right of parliamentary taxation and asserting that the Tea Act was an attack on the liberties of America. The meeting demanded that the consignee should resign and said that the tea should be returned to England. In Charleston the tea was landed and placed in a warehouse. Three years later it was sold to raise money in the conflict with Britain. However, it was in Boston that the most drastic events occurred. In October the popular leaders met and decided to oppose the sale of any tea shipped by the Company and it was demanded that the consignees resign. The consignees refused to do so, so the Boston Committee of Correspondence announced that it would use its influence to prevent the tea from being landed and sold.

The first tea ship, the Dartmouth, arrived in Boston harbour on 27 November; two more arrived a few days later. A series of mass meetings in Boston demanded that the tea should be returned to Britain but Governor Hutchinson refused to allow this to happen. He ordered the meetings to disperse but was ignored. The consignee was willing to return the cargo to Britain but Hutchinson refused a permit and ordered warships in the harbour to prevent the ship from sailing. Meanwhile, the Dartmouth registered at the customs house and was liable to seizure if the duties were not paid within twenty days. On 2 December 1773, handbills were posted in Boston warning the people to have nothing to do with the tea cargoes.

The twentieth day was 16 December when the mob took over and men disguised as Indians dumped the tea into Boston harbour. The Boston Gazette reported the events of that day.

Just before the dissolution of the meeting, a number of brave and resolute men, dressed in the Indian manner, approached near the door of the Assembly, gave the war whoop, which rang through the house and was answered by some in the galleries, but silence being commanded, and a peaceable deportment was again enjoined till the dissolution. The Indians, as they were then called, repaired to the wharf where the ships lay that had the tea on board, and were followed by hundreds of people to see the event of the transactions of those who made so grotesque an appearance.

They, the Indians, immediately repaired on board Captain Hall's ship, where they hoisted out the chests of tea, and when upon deck stove the chests and emptied the tea overboard; having cleared this ship they proceeded to Captain Bruce's and then to Captain Coffin's brig. They applied themselves so dexterously to the destruction of this commodity that in the space of three hours they broke up 342 chests, which was the whole number in those vessels, and discharged the contents into the dock. When the tide rose it floated the broken chests and the tea insomuch that the surface of the water was filled therewith a considerable way from the south part of the town to Dorchester Neck, and lodged on the shores. There was the greatest care taken to prevent the tea from being purloined by the populace. One or two, being detected in endeavouring to pocket a small quantity, were stripped of their acquisitions and very roughly handled.

It is worthy of remark that although a considerable quantity of goods were still remaining on board the vessels, no injury was sustained. Such attention to private property was observed that a small padlock belonging to the captain of one of the ships being broke, another was procured and sent to him. The town was very quiet during the whole evening and night following. Those persons who were from the country returned with a merry heart; and the next day joy appeared in almost every countenance, some on occasion of the destruction of the tea, others on account of the quietness with which it was effected. One of the Monday's papers says that the masters and owners are well pleased that their ships are thus cleared.

Reproduced kind permission of author Marjie Boyle and the Web of English History.