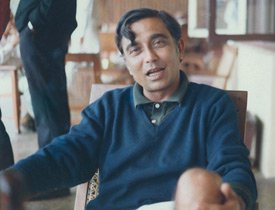 Ralston, who passed away very recently, demands appreciation if not comment, on account of his unique individuality. Mourned he would have been, by his many friends and relatives but it does not seem right that a man such as he should go unsung.

Invariably, appreciations extol virtues and ignore faults. Those who are written about emerging as repositories of all that is good and wonderful in man. In my perception, however, human beings are an endearing mix of the good and the bad, the sublime and the ridiculous and even the sacred and the profane. Therefore, the lines that follow, will be an honest attempt at striking a reasonable balance between two extremes. This aims to be a tribute and not a eulogy.

Ralston was, by definition, a professional planter and he remained as such to the end. It would have been difficult to conceive him in any other context. Planting was his profession, passion and pride. His career, spanning more than five decades and his contribution to the industry is very much part of plantation lore. Therefore, Ralston’s reputation and achievements as a planter do not need my plaudits. However, Ralston, the man was far more difficult to compartmentalize and I would, rather, say something of the man I knew.

I first met Ralston in the late sixties; I was a raw entrant to the plantation industry and Ralston already a senior estate manager in a prestigious company. Then, I addressed him as “Sir”, very respectfully. Many years later, as things between us became more equal and we found a commonality of interests, I was able to call him “Ralston”, but still with respect. However, I never called him “Rally”, as many friends of his own vintage did. Even in my mind, he remained as “Ralston”. This was entirely in instinctive deference to his stature within an industry we grew up in.

Ralston the private individual was a complex and multifaceted personality, not easily categorised or defined. He was, outwardly, a typical representative of an insular culture bred by conventional British colonial influences. As one of the earliest entrants into an industry then totally dominated by the British, he consciously conformed to many of its traditions and social and conduct parameters, as such compliances were then necessary for survival. Yet, within this highly institutionalised culture, he maintained an individuality that transcended its narrow confines. Those who knew him superficially, particularly in the early years, would have been forgiven for categorizing him as a “Brown Sahib”. Doubtless, he did manifest some of the more typical attributes. But he was also a highly cultured man with wide-ranging interests, very widely read, possessing a keen appreciation of quality music, art and other refined pursuits which identified him as a man whose true persona, existed independent of a conventional exterior.

Many would have called him contentious by nature. He was, certainly, controversial, quick to stimulate debate and argument and quite unapologetic about his confrontational stances. Whilst being very much an icon himself, he loved attacking icons and conventional concepts; bon vivant, party goer, man - about - many – clubs and sportsman excelling in many fields; mercurial and difficult to please; irreverent but never, ever, dull. He was all of these and a few other things besides. Yet, through all these contradictory and provocative images there was always visible, the steely core of the professional planter with an unwavering commitment to excellence. He was also a totally sincere man with a deep commitment to relationships and in his quieter and more reflective moments, a delightful companion.

The stories about Ralston and his many exploits are legion. Over the years they have acquired weight and lustre with repeated telling. They will continue to be recounted by many in the years to come and need not be mentioned here. Suffice to say that however outrageous the anecdote it will, most likely, be based on a kernel of truth. Ralston the legend was born long before the death of Ralston, the man.

During the era of state management of the plantations, a somewhat sorry interlude in plantation history, when advancement relied more on relationships and connections and less on performance, Ralston did not prosper as much as some of his less accomplished colleagues did. It was then a management milieu which did not welcome Ralston’s brand of forthrightness and abhorrence of sycophancy.

Ralston’s manner of passing was consistent with his personality and the way he lived his life. It was sudden and without sentiment or prolonged goodbyes. Despite a lifestyle that many would have considered extravagant and unashamedly given to the savouring of the more enjoyable things in life, he left no mansions or other edifices behind him. He was never an accumulator of wealth or assets. However, none of the people who came to know this complex but lovable man will ever forget him. He is sure to be spoken of for a long time to come, by many, with affection, amusement and respect, in many corners of this country, particularly in those old-fashioned watering holes in the hill country which, over the years, were both enlivened and enriched by his generous patronage. His universally acknowledged reputation for ethical dealing and professionalism, in a lifetime given to the service of an industry which to him was more a passion than an employment and an unimpeachable record of integrity, will be his true and most lasting monument.