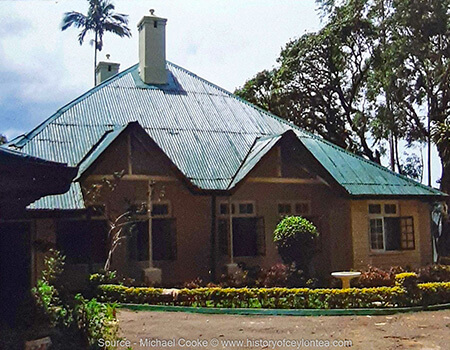 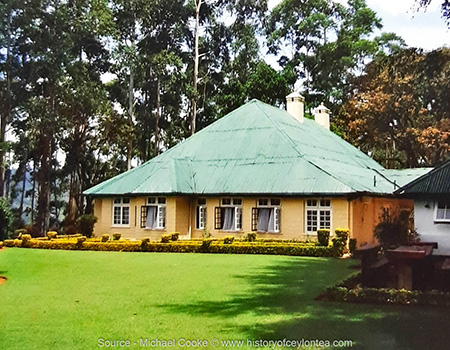 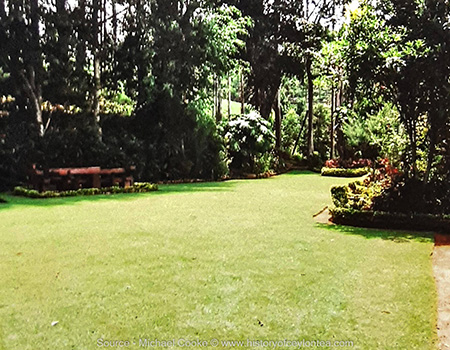 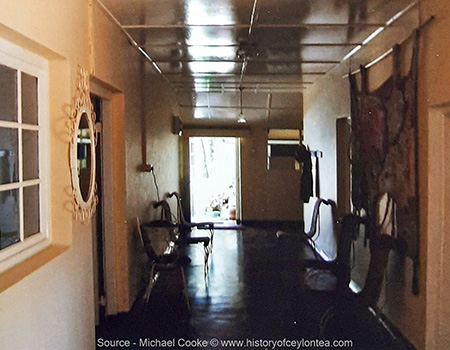 Newton Estate, Dickoya can be traced to the year 1871 from the details available in the Ceylon Directory. The estate was owned by Mr. R. Kydd, managed by Mackwoods Ltd, and Mr. Rudd was the Superintendent. There were five coffee trees in the garden which gives evidence that Newton was originally a coffee plantation.

Over the years the estate changed hands to the ownership of Mr. J. Hamilton with J.P.Green and Company as its agents. The resident planter was Mr. J.J. Fryer. The agents changed hands once again with the appointment of C. Bond and J. Flyer, who relinquished the agency in favour of Mr. R. D. Kershaw.

With the coffee crisis that affected all plantations, Newton was replanted in tea culminating in 229 acres. A tea factory was built within walking distance from the bungalow. Some of the finest teas of various grades were sent to the Colombo auctions.

Newton bungalow which was built on British lines architecture was compact. It has a sitting room, morning room, dining room, master bedroom, visitors room, Visiting Agent’s room, and a large verandah leading to the outer rooms. The traditional hot room which had a cylindrical cast-iron tank that supplied hot water to the pantry, kitchen and to the washrooms.

The bungalow had a beautiful flower garden with a variety of flowers, plants and bluegrass lawns. It was built on a location that commanded a spectacular view of the Castlereagh Lake in the foreground, and the Holy Mountain - Adams Peak in the Background. During the pilgrimage season it was a picturesque sight to see the pathway to the Peak lit up at night.

In the 1940s the estate was sold to the renowned planter from down south Mr. Henry Woodward Amarasuriya who owned estates in the up-country as well as in the low-country. Amarasuriya Ltd. were the Managing Agents.

My late father George Alexander Cooke was the Superintendent of Newton in the mid-1960s.

There were planters in the district who used to sail on the Castlereagh Lake if the weather was bright on Sundays. Their sailboats had sailcloth of different colours and it was a spectacular sight to watch them sail until early afternoon.

Newton Estate was close to the historic Christian Church Warleigh chapel in Dickoya. Situated en-route to the Dickoya Base Hospital and the Upper Glencairn holiday bungalow, Newton is also accessible to Dickoya and Norwood towns.

The 20.2-hectare block was sold to proprietorships and they, in turn, sold it to Mr. Leslie Dharmaratne - a planter by profession. Leslie renamed the property New Newton and developed a brilliant idea to convert the bungalow into a guest bungalow, which they refurbished.

Its location was ideal as guests enjoyed the view and were treated to excellent cuisine prepared by ‘Appu’ John and served by the second domestic aide Suppiah. Ardi was in charge of the bar and was adept at mixing cocktails.

The Superintendent of New Newton was Mrs. Dakshini Dharmaratne – Leslie’s wife, and S.D. Isaac was the Field Officer.

New Newton was sold to a Company in Colombo that continued to run the bungalow as a Guest House of repute.

After the take over of estates, the remaining portion of Newton that was state property was amalgamated with Poyston and Ireby Estates, Dickoya. Mr. C.G.P Weerasinghe was one of the Superintendents.

In 1992 when estates were taken over by Regional Plantation Companies, Newton was amalgamated with Norwood Estate.