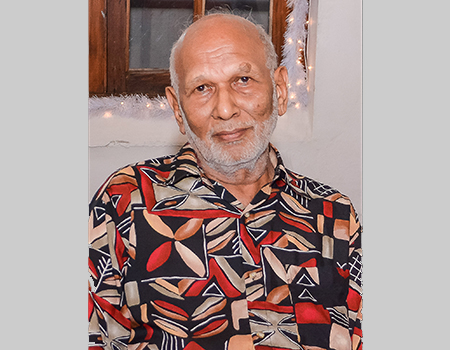 This is not really a eulogy, because to my mind, eulogies in general seem to invest the deceased with virtues and attributes, some of which no one knew about, and all of which confer perfection on the dear departed. To paraphrase a famous quotation attributed to Benjamin Disraeli, there are lies, damn’ lies and eulogies, and so these reminiscences of mine are just a tribute to a wonderful human being whom we are all the richer for having known.

Travice was born around the time the first VW Beetles were rolling off the assembly line, in Wolfsburg, Germany. That was way back in 1938, sometime before the beginning of WWII. We, the Holsingers of Kalutara, were a rather large family even for those times. Jacynth, came first followed by Travice after which there was a hiatus in the production line of about six years. The four of us, Jennifer (God rest her soul) myself, Bernard and Jannice followed fairly swiftly thereafter.

The age difference between the elder two siblings and us meant that they were socially remote from us and had different interests and different friends and they regarded us as noisy little alien beings to be humoured and tolerated from a distance!

However, as we grew older, the barriers of age were slowly breached, and we began to have a much better understanding of our senior siblings and consequently a more egalitarian relationship developed. Travice began to spend more time playing with us and made up various games like “Train” and “Bang”. He also taught us our first card game, the still popular “304” and “Rummy”, finally introducing us to that supreme card game, “Contract Bridge”.

Travice was nearing the completion of his secondary education at St Joseph’s College, Colombo and though he did not particularly distinguish himself in the sphere of the academic, it was in the Sporting Arena that he shone. He was a talented tennis player and captained the St. Joseph’s College team. He was adept at ball games and when he left St Joseph’s to return to our hometown, Chilaw, while awaiting SSC Exam results, he immediately found a place in the St Mary’s College, first eleven cricket team and acquired a reputation as a terrific fielder, and a reliable lower order batsman.

He had decided that he wanted to become a tea planter in his professional life and in January 1959 found employment in the Shaw Wallace & Hedges Group, on Roeberry Estate, in far off Madulsima, as an Assistant Superintendent.

Planters were much envied in those days as being fortunate to live a life of luxury, but this was not strictly correct. True they usually had large fully furnished bungalows and several servants and a company motor vehicle or two. They were adequately remunerated, though not excessively so. Tea planting was in reality an arduous job which made heavy demands from the planter for sustained effort and long working hours. The appurtenances of luxury should be viewed as compensation for the rigours and hardships in the life of a tea planter.

Those were the days when the cost of living was low, and most people could get by solely on their earnings. An Assistant Superintendent could hold his household expenditure down to about Rs. 300/- or 400/- per month and make a decent saving on his salary.

Still, if you were so inclined, you could run through your salary and drop a large proportion of it in the various planting clubs that were the focal points of social life in those days.

Travice was the soul of hospitality too and he and later Celine were hardly ever left to their own devices having throngs of visitors, to most of whom planting life was a novel experience.

Naturally, members of our family were frequent visitors, especially at Travice’s Elemana Division bungalow, which was large and comfortable. The climate during the “Winter” was especially salubrious and the Madulsima District was perched on the Easternmost escarpments of the Central Massif. We went on long walks regularly and took in the breath-taking scenery around us. On a clear day we could actually see the Inginiyagala Rock and the Indian Ocean beyond. Life in the hills, we thought, was beyond compare.

Social life in those days was not lacking. On Roeberry Estate there was the manager, Frazer Spence, who was somewhat reclusive but, Travice’s compatriots, Jeff Koch and Sarath de Zoysa and their wives, Winsome and Muarifa more than made up for his reticence and his close friend Winston Bayley, married to cousin Delia, was on neighbouring Cocogalla Estate.

Madulsima was socially a hive of activity I still remember some of the senior planters of the day, and their spouses. On Mahadowa Estate there were Vivian and Charmaine Blaze, Tony and Hazel Boyd-Moss on Verellapatna, Tommy Thompson on Galoola, Monte Strong on Batawatte, Chula and Sylvia Karunaratne of Uva Kellie. Club Day was almost religiously observed, and they and their assistant Superintendents and families would all invariably congregate at the Madulsima club for tennis and tiffin and dally long into the night.

Travice, always a people person, enjoyed having visitors and getting to know them. He had a fantastic memory and was later acknowledged as the archivist and genealogist in our family, and he never disappointed us in our inquiries about our antecedents. He was known as a walking Ferguson’s Directory.

Travice in his own unobtrusive way was a live wire in the planting districts he worked in. He was always helpful and caring and went that extra mile to help any of his friends in any way he could, even at some detriment to himself. This defining facet of his character was always there – even on the tennis court!

He soon acquired a reputation as one of the best tennis players in the up-country, but he did not get to the top of the heap because he had one glaring flaw – he did not possess that killer instinct, that desire to bash the opposition at every turn. He was a real softie who felt awful to humiliate an opponent and he would feed a weak player some dolly shots and ensure a respectable score on both sides.

Sometimes though, it backfired and he would turn victory into defeat but that was Travice. The glory of winning did not mean too much to him. Actually, He got his kicks from seeing to the happiness and contentment of those around him.

He could be exasperating at times. Notorious for his long deliberations before answering a question, he would give us that silent enigmatic look while we were getting impatient. Come on Travice, we would often blurt out, what have you got to say? But he, quite unperturbed, would reply only when he was good and ready.

Travice took a greater interest in us after the passing away of our mother. He had high hopes of my becoming a doctor, but I became a planter too. When he heard that I had accepted a planting job he must have been very disappointed but he, typically, hid his disappointment and then took it upon himself to see that I was properly outfitted and equipped to begin my planting career. I know he spent thousands of rupees of his hard-earned saving to set me up and I will never forget how much he helped me to get a proper start in the planting world. He did the same for brother Bernard a few years later.

One would be forgiven for not knowing that behind that enigmatic and somewhat passive façade, their throbbed a romantic heart. Travice himself would have blushed to be known as a romantic, but his courtship of Celine was pure and unadulterated romance. When Travice met Celine, it must have been love at first sight for him though he would not have professed it. Celine, pretty, vivacious, confident and highly accomplished, worked as a Private Secretary to the Managing Director of a large Estate Agency House. Obviously she was not oblivious to his attentions and he must have found her responses encouraging.

She was attracted to him but for some good reason she left the country and sailed to the UK to take up a similar position in London. Travice was devastated – but not for long. He somehow obtained the necessary leave and got on board the next available ship and pursued his lady love across the oceans right up to London Town. There, he swept her off her feet and wasted no time in proposing to her and marrying her…Oh my Goodness, what could be more romantic than that?…It was the stuff of which dreams are made!

When I saw the ecstatic couple on their return, I thought to myself, hmmm, the prize was certainly worth the chase.

Do you know, that around that time I had read one of those Mills & Boon romances by Ruby M Ayres which was titled The Man from Ceylon and it had a very similar storyline? I am now beginning to wonder whether Travice had read that book before I did….

Travice and Celine are both looking down on us fondly while plucking their celestial harps, but they have left us with a wonderful representation of themselves in the persons of their lovely daughter, Julaine and three stalwart sons, Michael, Dylan, Ryan and their families who will always remind us of Travice and Celine. As one of the sons told me, they will live on with us always.

Finally I would like to leave you with this epitaph – a message that one of our cousins sent me.

“Travice was about the noblest human being I ever knew. He was principled, kind and generous but also interesting and fun to be with. Oh damn, I wish that I could have had just one more very long chat with him.”

I think that sums up what we all feel about Travice, who now enjoys his eternal reward in Heaven.