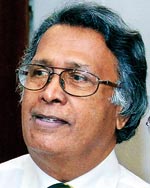 It is one year since the friend and mentor of so many, Leslie Dharmaratne, departed this earth on that fateful day – March 3rd.

Leslie after an illustrious career at his alma mater – Kingswood College – joined that exclusive agency George Steuart & Company Limited and soon made his mark as a planter.  After a spell in Uva, Leslie moved over to the Dimbula district where he spent the rest of his days as a planter.

Leslie’s ability as a planter was recognized by Upali Wijewardena when he was handpicked to be the Superintendent of Derryclare Estate, Kotagala from where he moved as Manager to Drayton Estate, Kotagala.  When he was on Drayton, estates were nationalized and Leslie thus became an employee of  the Janatha Estates Development Board (JEDB).

Soon after nationalization, Mr Wijewardena was able to succeed in litigation whereby all estates owned by him were re-vested with him. This resulted in Leslie being requested by Mr Wijewardena to take over some estates on his behalf which action of Leslie’s was not viewed favourably by the JEDB who initiated disciplinary action against Leslie. The Government of the day also enacted legislation nullifying the ruling of court that Mr Wijewardena should be handed back the estates previously owned by him, which left Leslie in a spot.

Mr Wijewardena immediately stepped in and employed Leslie, providing him with everything and more that he was entitled to and received as a planter, even though Leslie had no specific function to perform. Shortly thereafter when he launched the Island Group of Newspapers he appointed Leslie as its founder Managing Director.  Leslie’s pioneering efforts with the Island Group are probably what has made the Group what it is today.

As a “Newspaper Baron”, Leslie immediately became a VIP but his simplicity never left him.  One instance stands out in my mind and needs mentioning. The year was 1992 and Leslie was at the height of his power.  I was then in-charge of some estates in Pundaluoya and was driving back there from Colombo when I noticed my Chairman, Stanley Unamboowe and G C Wickremesinghe, Chairman of Aitken Spence, on the road with their vehicle having had a flat tyre.  I immediately stopped and while assisting them, a BMW and a white Pajero, which was serving as a back-up vehicle, whizzed past.  The BMW and the Pajero having passed us, and obviously having seen us, stopped, reversed up to where we were and lo and behold who alights from the BMW – none other than dear Leslie.  He had seen me standing on the road and assumed that my vehicle had broken down.  Though Leslie learnt that the problem was nothing other than a flat tyre, he however stayed behind till the tyre was replaced chatting amiably with M/s Unaboowe, Wickremesinghe and myself. I can well recall, Mr Wickremesinghe requesting Leslie, whom he had not met before, to support, through the Upali Group Newspapers, Aitken Spence’s decision to build the Kandalama Hotel which, Leslie immediately agreed to.

After his tenure at the Upali Group ceased, Leslie ventured into the field of education and was the founder of the British School in Colombo.  Leslie’s generosity and kindness was however taken as a weakness by some and this resulted in him being compelled to divest control of the school subsequently.

Leslie and I were Freemasons and we both derived immense joy in participating in the activities of Freemasonry.  In the late 1980s, the Deputy Grand Master of the Grand Lodge of Ireland was visiting Sri Lanka for a very short stay and Leslie being determined to ensure this distinguished personality visited Leslie’s and my mother Lodge, Dimbula, in Talawakelle, arranged for the Deputy Grand Master to be transported to Talawakelle and back by helicopter, all at Leslie’s cost.

In 1998, Freemasonry in Sri Lanka was again privileged to welcome the Grand Master and Assistant Grand Master from the Grand Lodge of Ireland.  Leslie was the obvious choice to chair the committee to make arrangements for the visit. In recognition of his contribution to Freemasonry, he was elected an officer of the Grand Lodge of Ireland. Sadly, Leslie’s affiliation to Freemasonry in general and his mother lodge Dimbula, ceased in around 2010 due to unfortunate but avoidable circumstances.

Leslie’s generosity and his steadfast belief to help those in distress knew no limits.  When a dear mutual friend was suffering from a very serious illness requiring treatment abroad and the family was short of a considerable amount of money, my wife and I took my friend’s wife to Leslie’s residence.When the problem was explained, he excused himself and returned with a cheque for the total amount required to meet the shortfall!

Leslie was also instrumental in getting employment for over 450 persons as well getting over 50 children enrolled at reputed schools.

He was a popular personality who enjoyed socializing and was a member of many clubs in Colombo – the Capri Club and the Colombo Swimming Club being his favourites.  Leslie served as Secretary of the Capri Club when his dear departed friend and colleague, Lasantha Fernando was President, and what a team they made.

Leslie was also elected as the President of the Association of Ex Planters – Sri Lanka in 2000 and he steered the Association with his inherent efficiency for two years thereafter.  He also had the distinction of being invited to be Chairman – Pro Tem at the 53rd Annual General Meeting of the Ceylon Planters Society in 1989.  In his address the message he conveyed to all planters was “all of you who have chosen planting as a profession will accept that, this is the time for all in our profession to stand up and be counted, to set about a rehabilitation of the industry and its restoration to its past glory.”  Words of wisdom indeed!

When the post of Secretary of The Mascots (an Association of Ex Planters of the Maskeliya & Upcot Districts) fell vacant, the unanimous choice was Leslie. He was elected at the Annual General Meeting on 25th February 2017 and was brimming with ideas but sadly, this did not turn out to be a reality as he was cruelly taken away from us just six days later.

Leslie also served as the Basnayake Nilame of the Kotte Raja Maha Viharaya, a post he held with much distinction and acceptance.

No words on Leslie would be complete without mentioning his beloved wife Dhakshini and their two sons, Shanker and Dulan who were all a tower of strength to him through good times and bad.

May his soul rest in eternal peace!