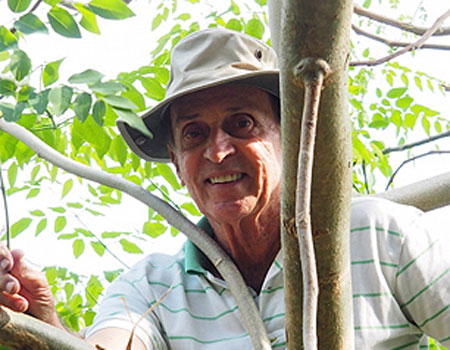 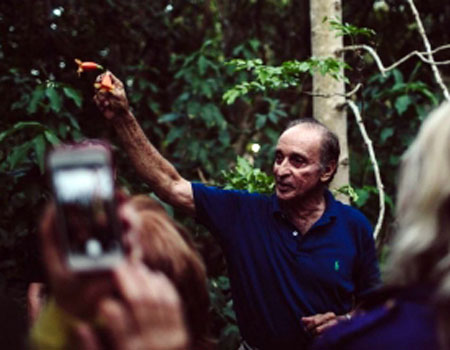 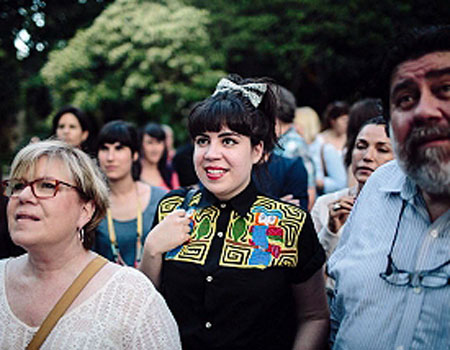 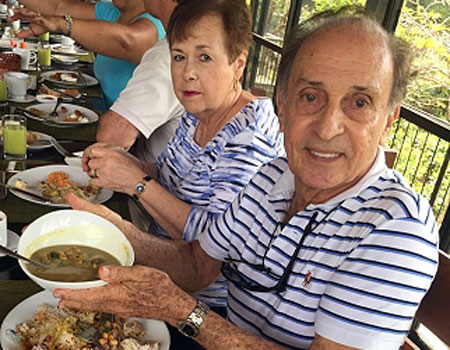 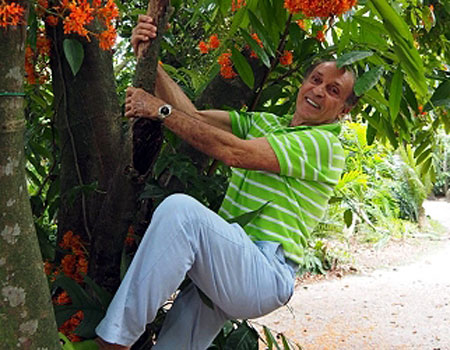 We’re heartbroken to report the death of Larry Schokman, longtime botanical garden director; veteran tea planter; award-winning horticulturist; author; and dear friend. Schokman, 82, died following a heart attack at his home, across the street from The Kampong, part of the National Tropical Botanic Garden, where he served as director for nearly 35 years.

Only a few weeks earlier, Schokman had witnessed – not for the first time – The Kampong’s iconic 22-ton baobab blown over by hurricane winds. The massive tree, planted in 1928 from a seed collected by botanist David Fairchild, had crashed to the ground during Schokman’s tenure by Hurricane Wilma 12 years earlier.

Now righted by a 240-ton crane and supported by stakes, the 12-ft base of the Adansonia digitata will be the final resting place for Schokman’s ashes.

Over decades, Schokman nurtured and expanded The Kampong’s tropical collection and catalogued 1,400 species in Plants of The Kampong, nearly 400 pages of descriptions, images and lore about the property, ranging from its origins as plant explorer David Fairchild’s house to its present status as part of the National Tropical Botanic Garden.

In the book, Schokman highlighted the garden’s economic plants, like cashew nutshell liquid, used in brake linings, and medicinal plants and their uses – turmeric to prevent stomach gas, the hallucinogenics Brugmansia and Datura “sometimes used in Haiti to create zombies.” The book listed the menu for a tropical plant dinner created in 1981 for botanical students, using plants all found at The Kampong, starting with rum punch (fermented and distilled sugarcane, pineapple, key lime), moving on to guacamole and paella, and ending with guava and papaya desserts and, of course, coffee (Coffea arabica) and tea (Camellia sinensis).

Readers of edible South Florida may remember Schokman plucking edible leaves for guests to smell and taste at a foraging tour of The Kampong during our O, Miami Poetry Festival Forager Fete collaboration in spring 2014. Schokman had agreed to come out of retirement to host the tour – after decades at the Coconut Grove botanical garden, he knew and loved every plant there – but raised his eyebrows when he learned he’d have only 20 minutes. “You’re joking, right?” he exclaimed, accustomed to giving comprehensive tours over the years for visitors from around the world. But he managed to keep the tour to half an hour, scrambling up ledges and enthralling his audience with tales and tastes of useful and edible plants at The Kampong.

Earlier this year, Schokman led a tour of garden explorers to his native Sri Lanka, where he grew up a tea planter in the island’s central highlands.

“He had a story for every tree on the hill,” says Lynda LaRocca. Schokman took the travellers to the tea plantation to see the post-harvest processing machinery he had installed 40 years earlier, still in use, and introduced them to his favourite Sri Lankan dishes, like hoppers and savoury curries for breakfast.

The list of plant societies Schokman belonged to, led and took an active role in, is long and impressive. He was a founding member of the Tropical Flowering Tree Society (TFTS); on the boards of TREE-mendous Miami, Friends of Chapman Field–USDA, University of Miami's Gifford Arboretum, Rare Fruit Council International and the City of Miami Committee on Beautification and Environment. He was chairman and cheerleader of the Royal Poinciana Fiesta, Miami’s oldest continuously running festival, keeping alive traditions like vintage Royal Poinciana Punch (orange sherbet, cranberry juice, ginger ale) and narrating the tram tours showing off the season’s gaudiest royal poinciana trees.

Schokman also served on the advisory panel for the Medicinal Garden, School of Pharmacology, Nova University, and Ad Hoc Panel on Underexploited Tropical Fruit, Board of Science and Technology for International Development for the National Research Council, DC. Schokman was the 2015 recipient of the David Fairchild Medal for Plant Exploration and was nationally recognized in 2000 by the American Horticulture Society with its Professional Award for director of a U.S. botanical garden. He was as proficient putting together international colour conferences for tropical flowering tree aficionados as he was doling out plant advice at Fairchild Tropical Botanic Garden’s annual Ramble and the TFTS flowering plant sales.

Known for his breadth of knowledge, his unflagging enthusiasm, his sly wit and his devastating charm, Schokman leaves a brilliant, vibrant legacy across all of South Florida in the rainbow of blazing royal poincianas, magenta ceiba blossoms, multicoloured plumerias and countless other technicolour tropical trees. They are planted along I-95 and US One, at botanical gardens and ZooMiami, and in countless backyards whose owners were inspired by his passionate spirit.

His wife, Colleen, says a celebration of life event will be held at a future date.