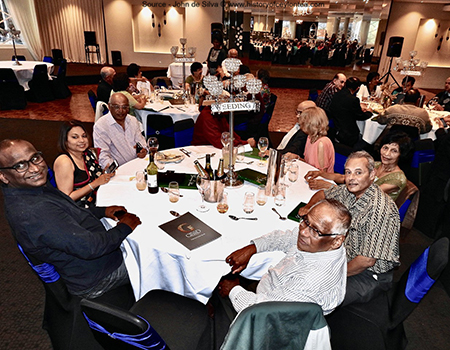 The Ex-Planters in Melbourne do not have any official association. In the late 1970s a dinner was organised for the Ex-Planters. Although this function was well attended there were no subsequent functions forthcoming.

In 1998, together with Robert Koelmeyer, we organised and held a lunch at the ACF Centre in Springvale South. This was a resounding success. We had a small group of enthusiastic helpers who were of immense help. We spent every cent that we collected and had our accounts on hand for perusal. In fact, the two of us were slightly out of pocket on the day!

The success of 1998 prompted the attendees to push us into having another function. Robert and I once again organised a luncheon on 27 July 2003 at St John Vianney Church Hall in Mulgrave. It was here that we had our veteran Caterer Victor de Silva in attendance. We received great support and assistance from a few Ex-Planters. The function was well attended and all present enjoyed a great time. A feature that we started was the presenting of each attendee with a gift. Dilmah very generously donated several gifts for the participants.

The successes of these functions pushed us along to try and organise luncheons every 3 to 4 years. It was not an easy task as we did these functions off our own bat having the chore of not only organising them but seeing that all moneys were accounted for and documented. At each function we observed a minute’s silence to remember those who had gone to that Heavenly Thotem.

For every luncheon Dilmah endeavoured to give us gifts for distribution and we thank them very much for their support. Their generosity was publicly acknowledged at each function.

The next luncheon was held on 19 March 2007 at St Anthony’s Church Hall in Noble Park. This was followed by the one we organised on 3 April 2011 at St Jude’s Community Centre in Scoresby. Our last function was on 15 November 2015 held at The Grand Metropol in Clayton. The catering at all these functions was done by Victor de Silva and his late wife Lorraine. As these functions were primarily for all to get-together and renew friendships there was little or no dancing. Soft music was played in the background not interfering with the chit chats that were buzzing around.

By 2015 it was becoming progressively apparent that many were finding it difficult to attend the functions as age was catching up and mobility was hampered. Our champion caterer too was finding it difficult to take on the burden. In 2020 we decided to book a small Sri Lankan Restaurant and let the Ex-Planters know venue and cost. They could pay the cover charge for the meal and we could at least meet. Alas Covid-19 got in the way and here we are in limbo.

I designed a flyer that was used for each of the functions. All the tables had names connected with the Planting Industry be they tea, rubber or coconut. There were no table numbers! Photograph were taken at all but the initial luncheon in 1998. The photographs are listed under each year. The final group photos taken in 2015 have the names of the attendees

As the chief organiser I wish to once again thank Robert Koelmeyer, Victor de Silva and Fred Armstrong for there kind help. Without them these luncheons would not have been a reality. I also thank all those other Ex-Planters who helped us make a success of the functions. I once again thank Dilmah for their generosity and support.

Click HERE to view some photos of the events.