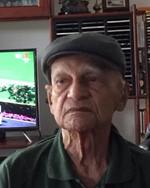 It is with much sadness that I advise the planting community of the peaceful passing of a planting legend - Douglas Jenkins. He was my boss, mentor and dear friend.

Douglas Jenkins had planting in his DNA. He was possibly the last fourth-generation Sri Lankan planter. He was the great-grandson of William James Jenkins, a Welsh tea planter from Assam, who was transferred to Ceylon by the British East India Company in the mid-1860’s and planted & managed a tea plantation called: Hope Estate, Hewaheta, adjacent to James Taylor’s: Loolecondera Estate, Hewaheta.

Douglas’ grandfather, James, planted on another ‘pioneering’ tea plantation called: Condegalla Estate, Ramboda; and his father, Edward, planted on Madampe Group, Rakwana, where Douglas was born on the 13th of November, 1926.

Within a year, he became Assistant Superintendent on Strathspey Group, Upcot, managed by George Steuart & Company, where he moved from junior to senior SD over a period of nine years. This was followed by two Acting Superintendent roles at: Ythanside, Kotagalla, Glenanore, Haputale, and Heatherleigh, Rakwana which led to his first charge, in 1962, as Superintendent Glentilt Estate Maskeliya.

Appointments as Superintendent Shawlands (overlooking Adawatte), Lunugalla (1965) and Glassaugh (overlooking UdaRadella), Nanu Oya (1969) followed; and in July 1971, he was appointed Superintendent of his beloved Strathspey Group, Upcot, which through mergers with adjacent estates had expanded to 2,431 cultivated acres of tea, comprising eight divisions, with four SD’s.

He was also a Visiting Agent to many estates, including Glentilt and Mocha Estates, in Maskeliya.

He migrated to Australia with his family in July 1976 and worked for two years at the Nerada Tea Plantation on the Palmerston ranges of Innisfail in far north Queensland.

He returned to Sri Lanka in 1983 to re-engage with planting at Hoonucotuwa Estate, Nawalapitiya, and an Agricultural Adviser (VA) for 12 estates in the Nawalapitiya Hatton districts, before returning to Australia, to eventually retire in Mackay, Queensland.

He attended Trinity College, Kandy, where he played cricket and rugby for his school; and, later played rugby for both Kandy and Dimbula, as a planter.

Douglas Jenkins excelled across all aspects of planting – as a leader, a strategist, an agriculturist, a factory-administrator, an office-administrator and all those other wonderful & diverse traits that only planters were fortunate enough to acquire during their working-life. He clearly had all the technical knowledge; and, the broad & deep practical experience needed to plan and execute, in an exemplary way, the complex agendas that individually and collectively represented the role of a planter. It was, truly, in his DNA. As his SD, I cherished that knowledge, which he shared so generously and willingly.

Douglas Jenkins was a great leader. He was tough-minded when it came to consistently demanding high standards of work; yet, he was tenderhearted whenever any of his subordinates needed it. He engendered trust by always being quick to devolve praise for everything that went right; and, taking responsibility for anything that went wrong. He was tenacious; he prided himself in somehow arriving at a solution to any problem that was encountered. He was self-effacing, reserved and even a little shy, perhaps. He had a paradoxical blend of humility and professional will, which set him apart as a great leader; not just a good one. He treated people with the care & dignity they deserved. In return, he earned their lasting respect & loyalty.

It is such a sad, sad reality that people get old and eventually pass-on to another beautiful existence. Douglas Jenkins passed away peacefully at his home on the 3rd of April 2018. In our world where so much fades, our memory of this decent and humble planting legend will always remain in our hearts.

I shall miss him very much and treasure the lessons he taught me.

On behalf of the planting community of Sri Lanka, I would like to pass-on our heartfelt condolences to his wife of 63 years, Waldine, his three children and his grandchildren.