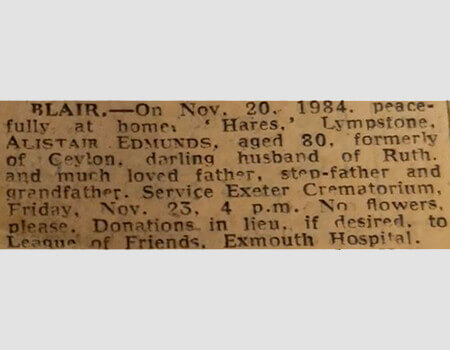 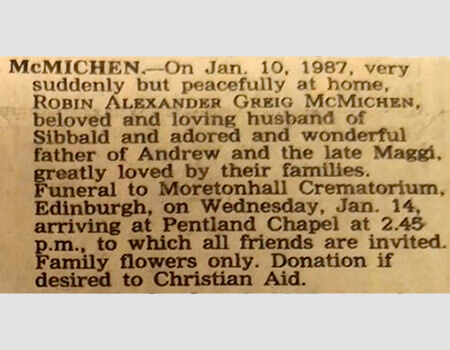 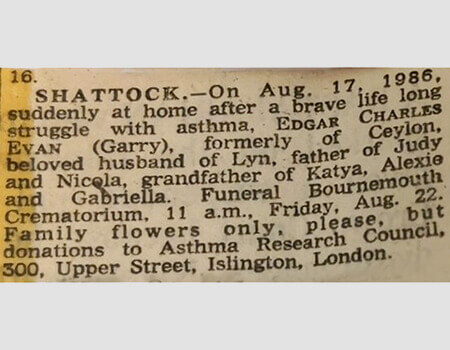 Deaths in the UK (in the 1980s) of some well-known personalities from mid twentieth century Ceylon.

Members of the Ceylon Society of Australia who may have known or worked with Britishers who were in charge of commercial companies, and estates, would possibly have wondered about their lives after returning “home”. Some notes kept by W.T. Ogilvy a former tea planter on Telbedde, Badulla, and Attampitiya, Bandarawela, have come into my possession. Ogilvy had served previously in India from 1937 to 1942, and during the war years in Burma as a rubber planter. He eventually retired to England from where he presumably observed with interest the progress of his countrymen in the colonial outpost then called Ceylon. Ogilvy had cut out newspaper extracts of obituary notes on funerals that took place largely in the 1980s, he himself presumably passing on after that.

N.W.G. Brown (Nick) - worked at Messageries Maritime Ltd, and later at Hayleys Ltd where he was a Director. He was a talented golfer and won many a tournament at the Royal Colombo Golf Club. He passed away on 8 October 1984.

R.A.G. McMichen - was Managing Director of James Finlay and Co for many years. He died on 10 January 1987.

E.C.E. Shattock (Garry) - was Managing Director of Shaw Wallace and Hedges, where his father E.M. Shattock worked as a Director of Lee Hedges and Co many decades previously. He died on 8 August 1988.

Other obituaries noted by Ogilvy are detailed below, and may be of use to family, friends, and genealogists, looking for significant information.