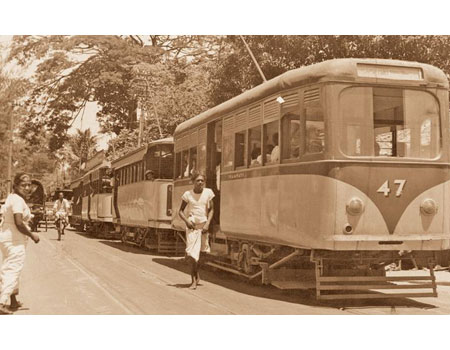 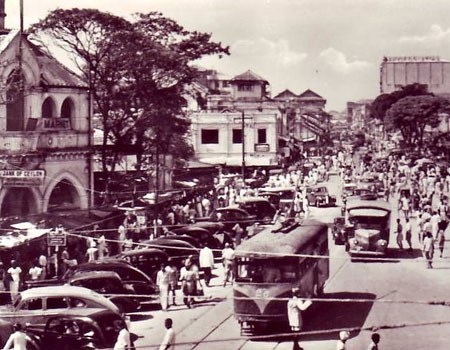 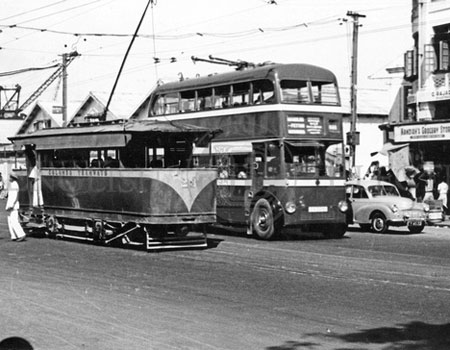 The Ceylon Planters’ Society was involved in the financing and influencing the establishment of the Tramways in Colombo.

The Colombo Electric Lighting and Tramways Co Ltd was a British company represented in Ceylon by Boustead Brothers. The Tramways were ready for operations by 1899/1900.

This company owned and operated the Pettah Power Station at Saunders Place which supplied the 110 volts DC power to propel the trams.

The tramcar Depot was next to the Gas Works adjoining the Pettah Power Station. From the depot the tramcars entered and exited through Gasworks Street on one side joining with Main Street, and on the other with Norris Road (today Olcott Mawatha). Turning right the route went past the Pettah Railway Station, New Fort Railway Station and Old Fort Railway Station. Lower Chatham Street alongside the Central Telegraph Office and the Chamber Of Commerce, took a right turn on to York Street near the Registrar General’s Office, passed Bristol Hotel, Millers/Cargills, Colombo Apothecaries, National Bank, the Victoria Arcade, the P&O Building and terminated near the Grand Oriental Hotel which served as the halt for the Colombo Harbour.

From Prince Street Fort, the Tramway went past the Times Building, Walker Sons, Gaffoor’s Buiding, Chalmers’ Granaries, near the Khan Clocktower and on the side of the Consistory (Kerkopf) Main Street. Near the Old Town Hall there was a choice of turning right to enter Gaswork Street along Edinburgh Market or turn left to enter Dam Street, continue on New Moor Street, continue to Messenger Street, cross Armour Street, join Grandpass Road, join St. Josephs Street and on to Nagalagam Street to the terminus near the old Grandpass Market at the corner with Ferguson Road.

Coming out of the Depot, at Norris Road taking a left turn the line was laid past the Mounted Police Division, past the old Colombo Railway Station, took a left turn near the Colombo Technical College took a right turn on to Central Road, continued past the old Railway Workshops, passing the Elphinstone to Maradana Junction, This road was known as Parana Veediya in days gone by, passed Punchi Borella to the terminus at Borella.

Due to A. E Goonesinghe’s tramcar strike (1929) the company lost interest in expanding the network or maintaining the system. The decrepit system was sold to the Colombo Municpal Council in 1943 and their Tramways Dept operated the system until 1960. About 1953 it was decided to phase out the trams and replace them with Electric Trolley Buses.

Many Websites show incorrect captions of pictures with other trams of the region. A popular photo is of a colonial looking building with a tramcar No 70 (really a Bombay tram) in front of it which is touted as a Colombo tram; this cannot be; Colombo never had more than 56 tram cars. The earliest tram cars were of a ‘toast rack’ style, skeletal looking and of a more open design, later some were given a cladding to match the styling of the time.

The tramcars were sold by the CMC auction at 100 Rupees per car. Most were purchased by A. Y. S. Gnanam who had already made a fortune with War Surplus steel and other metals.

There was speculation that a tramcar was at CTB Werahera. The writer of this note along with a Japanese Engineer/Colombo tram enthusiast toured the whole of Colombo Central and North with a hope of ‘catching’ a glimpse of a tram car. The nearest we found was a working near life-size replica of a CMC tram as a Vesak attraction at Punchi Borella. This replica went up and down a rudimentary track on what was later the car park of the “Passport Office”; it could carry a few kids. We met a tramcar driver (motorman) of the CMC era who had many anecdotes. In the premises of the Pettah Power Station there are still posts with pieces of cables sticking on them. The last known surviving tramcar motorman was Manickckam who had joined the Company as a car cleaner in 1924. He was aged 102 IN 2012 and was ‘residing’ at Kithusevana elders’ home in Welisara. I met Manickckam in 1979. Manickckam had died in 2015 aged 105.

There were two Burgher gentlemen who were Inspectors, they were known for their ability to swing in and out of moving trams. One was tall and nicknamed ’Anamalu’, the other was plump and nicknamed ‘Kolikuttu’ (De Bruin). His house exists in Punchi Borella, though the current ‘occupants’ have no connection with the de Bruins. The Adminismtion office of Tramways Ltd had been at Union Place.

The track gauge was 3 feet 6 inches. There are still tram lines visible near the Old Town Hall and on Grandpass Road. The only Tram Car Halt sign board was found at the end of St. Josephs Street.