Home>Publications & Articles>Articles>Charles Joseph Braine - from the UK to India, Hong Kong and Ceylon - an enterprising ancestor

Charles Joseph Braine - from the UK to India, Hong Kong and Ceylon - an enterprising ancestor 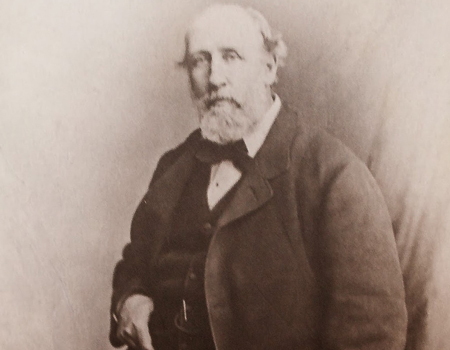 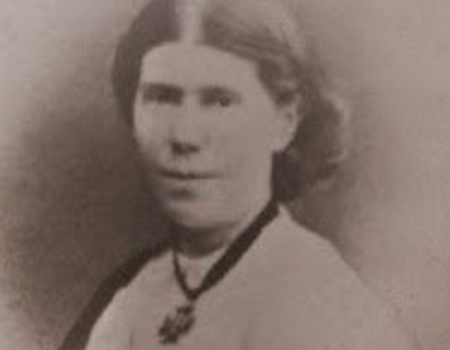 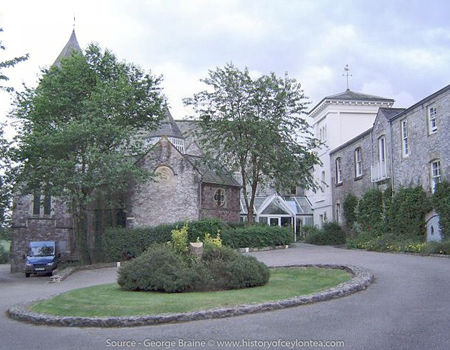 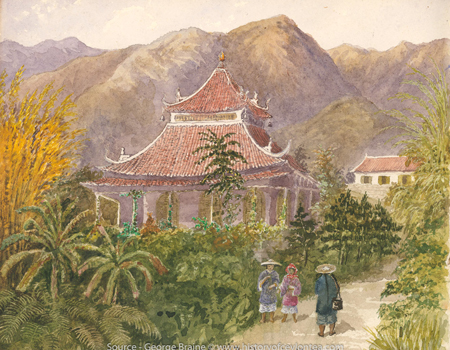 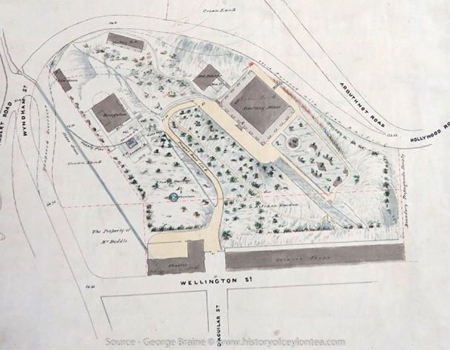 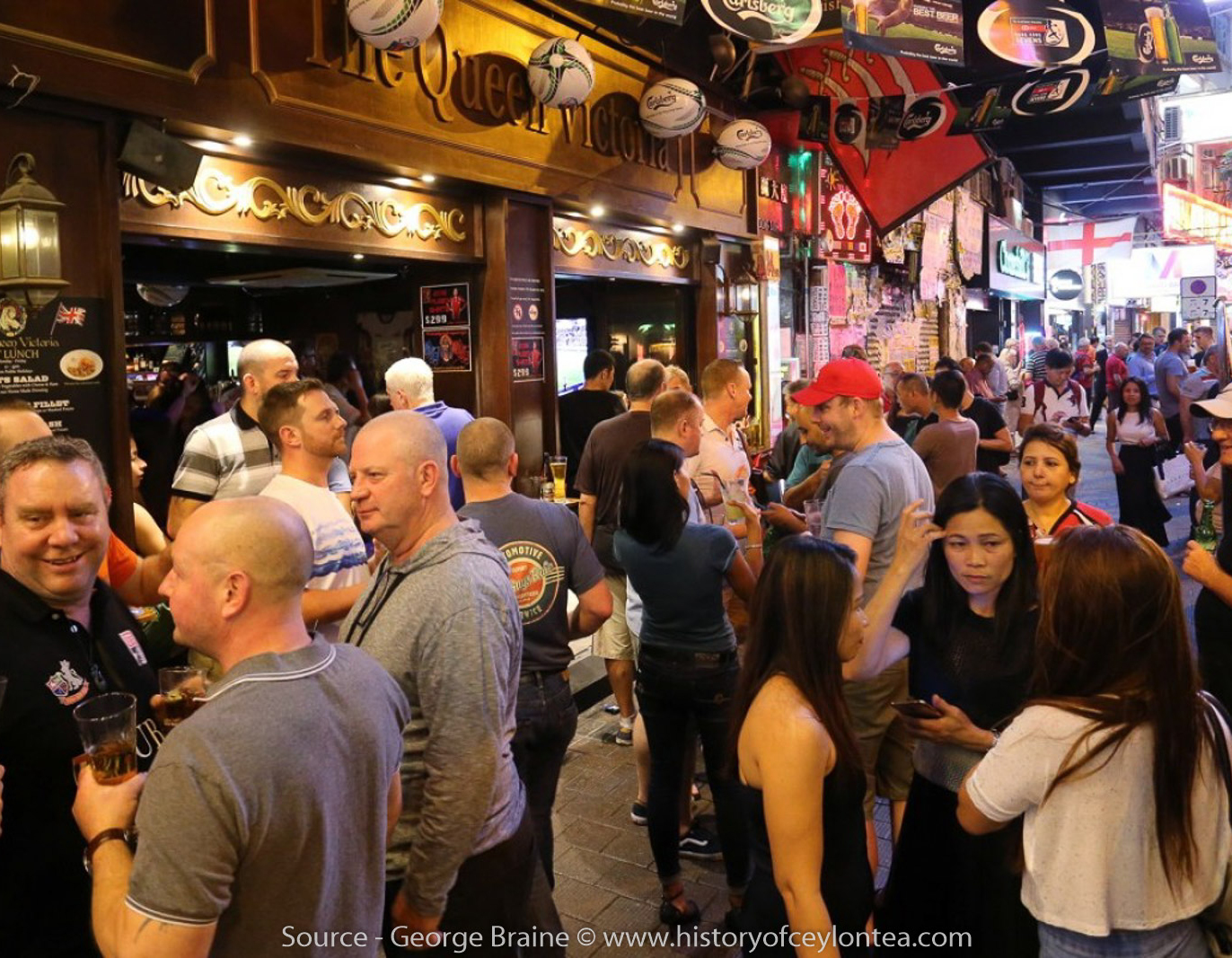 C.J. Braine was born in Middlesex, England, in 1814, the seventh of eleven children. At his baptism, his father’s (place of) occupation is stated as Navy office.

The next record for Braine is at his wedding, on 8 May 1845, to Eudora Marriott. Braine’s occupation appears as merchant, Madras.

Although no records of Braine’s work or his life in Madras has been found yet, their first child, Eudora was born in Madras in 1846. Evidence suggests that Braine traded in tea.

Braine worked for Dent & Co, one of the wealthiest British merchant firms, or Hongs, active in China during the 19th century, and rivaling Jardine’s. In Hong Kong (which came under British rule only in 1841) Braine is listed as a partner of Dent’s, a Justice of the Peace and a member of the Asiatic Society.

Braine’s stay in Hong Kong is best known for his ownership of “Green Bank”. A sumptuous description of Green Bank can be found in A Journey to the Tea Countries of China by Robert Fortune (1852). Fortune wrote that rugged mountains were seen to one side of Green Bank, contrasting with the luxuriant vegetation of the garden. He lists the shrubs and fruit trees, such as Chinese banyan, India rubber, Indian neem, Chinese cinnamon, coconut, loquat, Chinese gooseberry, wangpee, longan, leechee, pinus, bamboo, and more.

A bamboo avenue called “Orchid Walk”, cool even in midday, led to an orchid garden, in which numerous of orchid plants are listed by their scientific names. Above Orchid Walk were banks of myrtles, gardenias, oleander, and croton. A large collection of plants was placed on each side of the broad terrace in front of the “mansion”. These plants, camellias, azaleas, roses, and other plants were grown in pots “prettily painted in Chinese style and placed on porcelain stands”.

Braine appears to have left Hong Kong around 1850. The house and garden were offered for sale as the Governor’s residence and a public garden.

Before he left Hong Kong, Braine had sent Sir William Jackson Hooker, Director of the Royal Botanic Gardens, Kew, dried ferns and a large collection of seeds. The two letters he wrote to Hooker are on record. A passionate collector of ferns, one, Brainea, is named after Charles Joseph Braine.

The area where Green Bank was located is now called Lan Kwai Fong, best known in Hong Kong for its night life. The rugged hills in the background of Dent’s House are now known as mid-levels. Both Lan Kwai Fong and mid-levels are extremely expensive areas, in terms of property values.

Back in the UK

Braine next appears two letters he wrote from Taunton, UK, to Sir Jackson Hooker of the Royal Botanic Gardens, Kew. In one, dated 13 December 1850, he complains that two boxes of plants that were sent from Kew to Hong Kong had gone to Rio de Janeiro instead. Braine regrets that, as a result, the Hong Kong Governor may not agree to Braine's proposal to turn his garden in Hong Kong into a public one.

Braine next appears, in 1850, as the owner of a stately mansion, Abbotsley, in Devon, UK. The house is described as a “very elegant Mansion of the Italian style” with four ground floor rooms and a verandah, seven bedrooms, dressing and bathrooms, and servants’ quarters. He must have been wealthy, paying £6300 (about £800,000 in today’s money) for the 36-acre property.

Having renamed the property “Abbotsleigh”, Braine began its development, adding a 52-foot conservatory, a greenhouse, a well-planted walled garden, ornamental trees and thriving plantations in undulating park-like pastures. He persuaded Kew Gardens to supply the trees and shrubs. New farm buildings were also added, with stables and cow sheds, supplied with spring and rainwater, poultry sheds, barns for implements and root crops, a harness room and a liquid manure tank. The workers’ accommodation included a gardener’s cottage and a coach house with a groom’s room above it.

Six of his children were born at Abbotsleigh, including twin boys John and Percy, in 1855. But, Braine got into disputes with his neighbors and to perhaps to financial difficulties as well, having to mortgage the property for £5000. The house was sold in 1862 to the Roman Catholic church, and Augustinian nuns moved in to start a Priory.

In 1862, Braine moved to Ceylon as the manager of Ceylon Co. No information is available on his work at the company. In 1880, he is listed as the owner of Abbotsleigh Estate in the Hatton area. (Obviously named after his property in Devon.) He may have bought some acres of forest, cleared it, and planted coffee. The timing was not good, because a leaf disease known as the “coffee blight” began to spread and decimated the coffee plantations. Of 1700 coffee planters, only 400 stayed on in Ceylon.

Two of Braine’s sons, Charles Frederick (in 1880) and Arthur Belgrave, came to Ceylon as planters. Neither joined Abbotsleigh Estate. Arthur Belgrave is listed along with his father in the Kensington household in 1881, so he, too, must have returned to the UK.

Charles Joseph Braine passed away near Devon in the UK on 22 October 1890. He was my great, great grandfather.