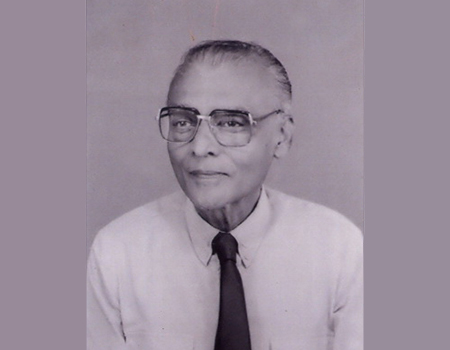 This appreciation is dedicated to an illustrious personality who immensely contributed much to the plantation industry of this country, Mr. Sepala Illangakoon on his 12th death anniversary.

Mr. Illangakoon was an outstanding student with an enviable academic record, was at a most impressionable period of his life when he gave up his university studies forsaking medicine and decided to make a career in planting. He spent a good part of his life of twenty years on Hapugastenne estate Ratnapura, the flagship of the Finlays group in the era.

It is pertinent to state that one of his close associates, an assistant, who did possess much of his characteristics, Ken Balendra an elite personality rose to be, I believe, the first Sri Lankan to be the chairman of the reputed business establishment Ms John Keels Holdings, creditable indeed.

After his career in planting, he joined Mackwoods Estates and Agencies and ended as its chairman. We had the privilege of working under him and admired his leadership skills not only in planting but on varied subjects of interest absolutely free, worth a fortune. I recall vividly a few days prior to nationalization of estates a few of us visited him at his office and we were moved with the sentiments expressed, "Gentlemen, I thank you all for the gracious sacrifices and please remember the industry is only changing hands, and bear in mind that you are not going to offer your services to an individual nor a political party, but you will continue to render your valuable services to the much dependent mainstay of the country – the plantation industry which has to last for generations to come".

Mr. Illangakoon held many high positions in the plantation sector, being the chairman of the Tea Board and a member of the Tea and Rubber Research Institutions and was appointed Secretary of the Planters Association, which was practically dormant after nationalization, and he virtually, single-handedly resuscitated the Association which is today a stronghold of the industry.

Having braved the sun, rain and storms in our lifetime our memories sail to the past as we have witnessed many transitions in the plantation sector since nationalization with frequent somersaults on the top and regional levels at every political turn. In lighter vein, we were compelled to dance to many a tune starting from the waltz and midway trotting to the samba and the tempo has now turned to a rollicking "Baila" with restrictions and many constraints placed before the industry. In our retirement we watch with dismay and sorrow that has led to the present status of the plantations and all we could do is to pray.

In 1988, the Hon. Minister of Plantations Mr. Gamini Dissanayake had many visions and wanted to find a practicable response to a sagging and persistent problem for decades in the plantation sector. The most momentous and far-reaching plantation philosophy that he enunciated, a part of his mission was to introduce the Cluster System of management and for him to accomplish this he chose the most qualified and suitable person Mr. Illangakoon who was his chosen chairman of the investment monitoring Board.

Thus in 1989 the Cluster System of management for the SLSPC and JEDB estates with cluster directors, larger units of Zone chairman and a full complement of staff was established. In a nutshell, the objectives of the Cluster System was to generate its own funds, consolidate the viable areas under cultivation, earmark suitable areas for replanting and diversify all available areas with other ventures, viz animal husbandry horticulture, floriculture, aqua-culture, forestry and other agricultural associated ventures and garment ventures inviting private sector participation.

Another important aspect of diversification to other ventures was to absorb the excess workers on estates, restricting the exodus of the estate population migrating to the cities seeking employment, posing a major problem.

I recall the Agras valley was clustered in two, Hauteville and Diyagama West managed by Bhatiya Jayaratne and myself, and the Zone Chairman being Upali Wijesekera. Upali is a character full of humour and will keep an audience howling with laughter, but I did see him from another angle – behind a desk as the Zone Chairman – full of action and lost no time to eradicate red tape, irregularities and barriers making good use of his amplified vocals and paving the path for the clusters to run smoothly. Since the discontinuation of the Cluster System, he was appointed Chairman of the Cement Corporation and I was told he did perform well fearlessly, overcoming irregularities, much appreciated by the public.

The Cluster System did start well and there was much enthusiasm amongst planters who apart from their expertise there was tremendous hopes of exploiting their talents in other fields.

Well, the saying goes, “good things end fast" and with the change of ministers overnight, without notice, the whole Cluster System sadly collapsed and this is pure political venom prevalent since independence of this nation.

The late Mr. Illangakoon ’s wife late Sunethra was a gracious lady and the grand daughter of late Sir Francis Molamure, the first speaker of the parliament, then Ceylon. His charming daughter Riyanjani is married to a colourful personality, Damitha Perera, a former chairman of the Planters Association and Director of Watawala and Agrapatana plantations, and presently with Union Commodities. His son Yevindra is a Micro Bio chemist resident in the UK.

Finally, we do appreciate you Sir, and express how glad we were to work under your leadership, and we are genuinely proud to have been led by a great boss.

May you continue to be blessed abundantly in the kingdom of heaven.

Hapugastenne became famous purely because of Mr. Ilangakoon who took upon himself of uprooting old termite infested seedling tea and replanting with VP. His mission was to replant 100 acres a year in its 11 divisions where London Directors of James Finlays thought that he was “mad” to undertake such a gigantic task. However, he convinced them, and approval was given to carry out that undertaking. Sepa (as he was known) was quite confident that he could fulfil his assignment as he had hard working SDs like Harold Duthie, Kandiah (Ken) Balendra, John Roelofsz and Charlie Ramanaden to name a few. With the assistance of those SDs, Sepa established 3 tea nurseries in 3 divisions which at any given time had over a million plants for planting and in supplying. Once Ernie took over Hapugastenne from Sepa, the same practice continued, and I was privileged to be the SD of the largest nursery out of the three.

Another innovation of Sepa was to start an ex-Finlays planters’ get-together in the 1980s where all hotel facilities (below cost) were provided by Sepa’s erstwhile SD – Ken Bala who was then the Chairman of John Keells. Bala offered Friday evening to Sunday lunch stay @ Rs.1000/- per head per day (children of ex-Finlays planters free) with the hotel staff throwing lavish buffet meals where Chairman Bala and wife Dr. Swyree were present every year. First such rendezvous was at Hotel Ceysands where over 100 participated. A cursory look at my old file reveals we had 66 ex Finlays planters (oldest being Mr. Eardley Hermon), 32 wives and children (unaccounted). Subsequently the John Keells group of hotels we enjoyed included Bentota Beach, Swany, Sigiriya Lodge and Village but the most preferred hotel was Ceysands (Bentota) due to the boat ride. Bala used to arrange a mock AGM where “office bearers” were elected with several yarns being spun in the “agenda”. There were only 2 such office bearers elected from the first ‘carnival’ to the last and their titles were: “Thalaivar” (Sepala Ilangakoon) and “Kanakapulle” (Upali Wijeyesekera) hence my old file still with me. With the demise of the several of the old brigade, this annual event came to an end in 1996 without a break for 15 years. A significant moment of these get-togethers was a romance started between a son and a daughter of 2 Finlays planters – son of Tissa Gunatilleke (once upon a time SD, Wellandura) and daughter of Nihal Cooray (also SD, Poronuwa during company days) which ended in marriage! Of course, by then Tissa and Nihal were both senior PDs.

I am honoured to pen a few experiences with Sepa and although he is no more, I am in touch with his only daughter Riyanjali, married to my good friend GDV (Donga) Perera.

May the soul of Mr. Carl Sepala Ilangakoon, one of the greatest planters of Ceylon, Rest in Peace.