Who needs glyphosate when friendly weeds can fight for you? 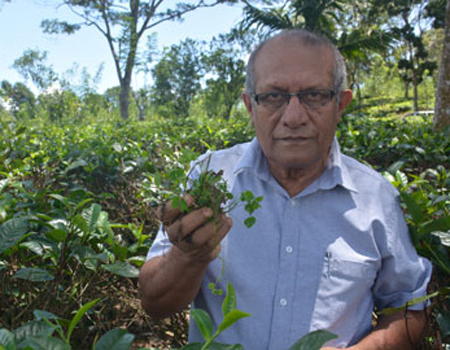 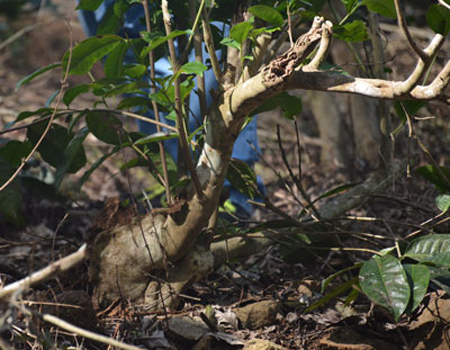 The government last week lifted the ban on glyphosate, in deference to complaints that the tea and rubber industries find it difficult to control weeds without the popular weedkiller – but a project successfully proves that weeds among tea bushes can be controlled without chemicals.

“You do not need agro-chemicals to control weeds in tea plantations as you can ecologically control the plants that are harmful,” Giri Kadurugamuwa of Rainforest Alliance, which has successfully experimented with an ecological method to control weeds, said.

“We must first understand that not all plants that grow in the underlayer are harmful: only about 25 per cent of the plants are weeds that suppress the growth of the tea bush, resulting in a drop in harvest,” Mr. Kadurugamuwa said.

The other plants are “good”, some enriching nitrogen in the soil, others being edible or having medicinal value.

“So, by assisting these friendly herbs to dominate the undergrowth we can control the growth of bad weeds,” Mr. Kadurugamuwa explained.

Initially, noxious or troublesome weeds must be removed manually before the weeds flower. This process need to be repeated periodically in the initial stages.

After a few cycles, a thick mat of good weeds that have been allowed to grow under the tea bushes will prevent the bad weeds from regrowing.

Once this natural control of weeds is established, growers do not need to put in intensive labour to uproot bad weeds frequently, and the money spent previously on weedkiller is also saved, Mr. Kadurugamuwa said.

There are more benefits to this process, the agriculture expert points out. The plants in the undergrowth protect the soil and enrich biomass, adding compost to the tea bush soil. “Many of the good leguminous plants have a root system that can add atmospheric nitrogen to the soil. Nitrogen is a good fertiliser, so, now, the tea bush gets an additional supplement of fertiliser.

“Besides, it is known that the roots of some friendly plants add ‘friendly chemicals’ that can, in fact, assist the growth of the tea bush.

“It is like we provided a natural ecosystem of ‘friends’ to live with the tea bush. One feels good to be among friends than be alone, and now the tea bushes will be growing happily,” Mr. Kadurugamuwa said jocularly. “But jokes apart, the productivity of the tea goes up under the new method without herbicides,” he said.

Tea planters usually follow a ‘clean floor policy’ where no plant is allowed underneath the tea bushes – but this exposes the soil to erosion when it rains heavily.

With the new methodology, however, the soil is covered with a carpet of friendly plants so the soil is conserved. Some of these friendly plants, such as goku kola and mukunuwenna, are popular foods for humans, and there are herbs such as undupiyaliya that are used as medicine, so these are added advantages to growers.

Weedkillers do not kill tea bushes but can weaken them: they are, to an extent, poisonous to the tea bush. Mr. Kadurugamuwa showed us a tea bush that had decayed sections of bark as a result of exposure to weedicide.

The methodology explained by the Rainforest Alliance was first experimented on about two years ago in a pilot project at the Hapugasthenna Plantations in Hatton. Mahendra Peiris, who conducted the research from inception, showed us his thriving tea plot now after several cycles of this method.

In doing so, Mr. Peiris also pointed out that popular weedkillers are not effective against some weeds so that in any case manual labour has to be employed for weeding. Thus the new method is also cost-effective, he said.

Armed with knowledge of the trial, the Rainforest Alliance, with the help of GEF funds, trained farmers to use the methods in their plots. They also established a training centre at an abandoned tea factory and made some of the farmers “trainers” in order to spread the message to the others.

During a previous field study visit, The Sunday Times met several farmers from the Ratnapura area who practise this method. According to a Tea Smallholder Development Authority (TSHDA) official, the Ratnapura range has the highest number of tea smallholders, about 100,000. Of these, about 5,000 are using this weed management system and gaining benefits.

Karunawathi, one small-scale tea grower in Kahawatte, Ratnapura, who owns an estate of one acre and 20 perches in extent, said her income had increased after turning to the new weed management system. Another grower, Sumanawathi, said now she harvests 500kg per acre whereas earlier it was only 400kg, so the new system has helped to increase yield.

The manager of another tea estate, Sanath Gamage, said his estate has become more environmentally friendly under the new system. Mr. Gamage maintains a log that shows hare, lizards, land monitors and birds frequent these areas more than they previously did.

Birds can be monitored to show signs of potential pests, said Mr. Kadurugamuwa. For example, if a group of babblers spend a deal of time feeding in one area, that could be a sign that this portion of ground has been infected by a pest. The birds while reducing the number of pests, also gives an early warning to the farmer.

The Rainforest Alliance project is not without its challenges. It is not always easy to turn farmers away from weedkillers. Manual labour is required to remove bad weeds, and this is challenging on slopes. Large plantations are reluctant to practise the method.

Experts point out, nevertheless, that tea bush productivity in Sri Lanka is in constant decline and that given this situation it is indeed wise to promote this alternative method of de-weeding tea, especially given its many benefits.

“Let’s all hope that growers will start adopting these kinds of environmentally friendly practices to break the dependency on agro-chemicals,” Mr. Kadurugamuwa said.