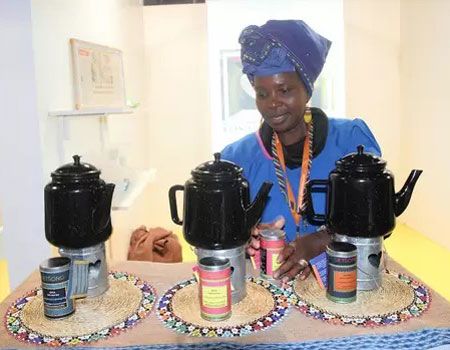 JOHANNESBURG - A Limpopo-born entrepreneur has turned tea into a thriving business venture.

The company manufactures choice tea for some of the country’s top retailers and overseas tea lovers.

Phaahla says it all started when her mother and elderly women from Sekhukhune discovered that tea was not only an enjoyable drink but that its leaves had health benefits.

The discovery sparked the idea to start a business to manufacture and sell the tea leaves on a commercial basis.

The University of Pretoria quantity surveying graduate says she convinced the women to in their pool resources and create a tea manufacturing business.

She says she told them that there was economic value in ancient knowledge systems that could be turned into a profitable business which can, over time, grow to become global conglomerates.

Her idea was embraced, and the business is now close on four years as a going concern. “Deliberate entrepreneurship is key,” says Phaahla.

Phaahla says the business struggled to gain market access and high impact distribution networks because it had to prove its credibility in a predominantly white male-dominated industry.

Today Setsong, which means culture in her native Sepedi, manufactures a range of sixteen artisanal, hand crafted infusions from indigenous African flora found in the natural landscapes of Limpopo.

“Our business is about the development of untapped biological species and exposing the potential use of indigenous knowledge in solving modern day health challenges,” Phahla says. “With the increase in health consciousness within society, we are selling nutrition and healthy living.”

Phaahla says healthy living is what makes the Setsong brand appealing to a socially conscious consumer in the millennial era.

Phaahla says the company has taken products that were near-impossible to commercialise because they emerged from disadvantaged communities who have never had a platform to share their knowledge.

She says Setsong is now working to expand its reach to global markets.

“These teas form part of the indigenous knowledge systems and were always known by the community for their exceptional health benefits and refreshing taste,” she says.

Currently, the tea range is available at major stores such as Spar, eateries such as Jacksons in Bryanston and the Bryanston Organic Market .

Phaahla says the business is making more money now because consumers have become aware of the health benefits of tea.

She says her goal is to capture 1 percent of the global tea market by 2025.

She wants to create a business with “a sustainable value chain” rooted in rural wisdom yet with a global market share in tea consuming countries such as China, United Kingdom, Japan, United States, Brazil and the United Arab Emirates.

She wants to compete with major players such as Nestle, Unilever, Tata Global Beverages, David’s Tea, The Republic of Tea, and Germany’s 1879-founded Haelssen and Lyon.

Phaahla says she is focused on crafting strategies that would put the company in this market.

“Doing our own manufacturing has become more viable,” says Phaahla.

Phaahla was recently awarded the top women entrepreneur prize and received technology incentives to the value of R100 000 at the SA Innovation Summit and SEDA Pitch & Perfect Competition.

“It has helped me to understand who we are as Africans and assisting to trace our origins,” she says.