Wages Board clears way to gazette Rs. 1,000 for plantations 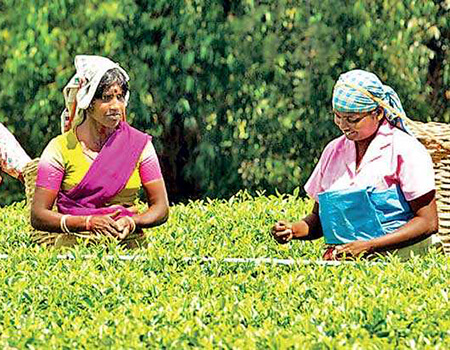 The Wages Board yesterday cleared the way to gazette the Rs. 1,000 daily wage for plantation workers after considering nearly 200 complaints against the move from both the tea and rubber sectors.

Labour Commissioner General Prabath Chandrakeerthi told the Daily FT that the 19 members of the Wages Board heard 179 complaints from Regional Plantation Companies (RPCs) and 18 others from the rubber industry, against the increase in the daily wage. However, when the matter was put to a final vote the resolution decided in mid-February to raise the daily wage to Rs. 1,000 was adopted.

“The employers protested the increase but the Wages Board has voted to implement the daily wage. Once this decision is notified to the Labour Minister and approved, the gazette will be issued,” Chandrakeerthi said.

The decision comes after the tripartite collective agreement between the RPCs, unions and Labour Ministry lapsed at the end of January. However, the Labour Commissioner General said that the industry could proceed to negotiate a fresh collective agreement with a welfare component.

However, the matter was placed before the Wages Board after nearly 14 rounds of talks between the trade unions, RPCs and the Employers Federation, talks that had gone on for over two years and still failed to reach an agreement. Neither side have so far indicated they are interested in pushing forward a collective agreement.

RPCs had earlier routinely protested the move insisting it was “unsustainable” as the industry did not have the capacity to earn the additional Rs. 12.5 billion needed to meet the cost companies would have to pay if the daily wage is set at Rs. 1,000.

Companies had also pointed out Sri Lanka was already contending with high costs of production and low global prices, which would result in RPCs having to engage in serious cost cutting measures to meet the increased wage expenditure. The RPCs favoured a basic wage of Rs. 725, a price share supplement of Rs. 50, an EPF/ETF of Rs. 108, and an Attendance and Productivity Incentive of Rs. 225, which has been reintroduced. This, they argued, would take the daily wage beyond Rs. 1,000.

Under the RPCs proposals, a fixed daily wage model would have been applicable for three days a week. On the rest, employees were to be remunerated based on one of two productivity-linked earning models – one where employees will earn Rs. 50 for every kilo of tea leaves plucked, the other being the revenue share model where employees could become entrepreneurs.

However, the trade unions were adamant on a Rs. 1,000 all-inclusive wage, which will now be implemented by the Government.

Hit by the COVID-19 pandemic and other challenges, the Tea industry weathered a tough year in 2020, with exports down and production plunging to its lowest in 23 years, according to a report by Forbes and Walker Tea Brokers.

However, the country’s tea production in January increased by 5% to 23 million kilograms (MnKg) compared to 21.9 MnKg a year earlier, where the boost of production was generated entirely from the low grown sector.

The year-on-year (YoY) low grown sector production increased from 13.3 MnKg in 2020 to 14.9 MnKg, which is at a three-year high following more favourable growing conditions and availability of fertiliser. But the high and mid growns were lower YoY from 2020 by 5% and 6% respectively.

Sri Lanka Customs data analysed by Asia Siyaka Research confirmed that the country’s export volume in January dropped by 6% to 20.8 MnKg compared to 22 MnKg shipped in a year earlier. However, the earnings in January increased by 6% to Rs. 19.2 billion ($ 101 million) compared to Rs. 18 billion ($ 99.7 million) recorded in the corresponding period last year. (UJ);