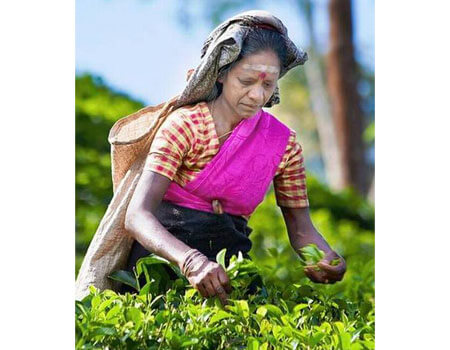 ‘LKR 700 (Rs. 275) it is,’ said Sri Lanka’s plantation companies earlier this week, fixing tea estate workers’ new basic daily wage. It is 300 rupees lesser than the LKR 1,000 that the workers demanded, but the negotiating trade unions concurred with the employers, and signed a collective agreement.

While employers have since been proclaiming the 40% rise as a significant step, the matter is far from resolved. The workers’ protest for a 1,000-rupee basic wage, which began in 2016, is bound to persist. Not because they are fixated on the number 1,000, but because they know for a fact that a fair wage can’t be anything less, that too amid spiralling living costs. Even LKR 1,000 is some 100 rupees lesser than what a 2018 study, done by the Institute of Social Development in Kandy, found as the necessary minimum living wage.

The issue of wages paid to the tens of thousands of workers employed in Sri Lanka’s famed tea estates has been a recurrent one in the sector that is known for the historic exploitation of its tea-pluckers, most of whom hail from Sri Lanka’s Malayaha Tamil community. Withstanding colonial-era exploitation — their ancestors were brought down by the British from India — that spilled over into post-Independence decades when the state and later private companies managed tea production, the workers toiled in the estates, steadily building Sri Lanka’s economy, through crucial foreign exchange. However, every time the workers sought a wage hike, the employers and their sympathisers were quick to brand the call unreasonable.

In the last couple of years, the workers’ struggle has exposed several other contemporary challenges in the ecosystem — the bearish tea sector that is ever-ready to cut costs in workers’ wages, the limits of patronage networks maintained by the traditional unions, the widening disparity in production by small holders and privately-owned estates, and significantly, a community that is increasingly averse to working in the sector.

Further, the ongoing struggle has shown how the concerns of workers, concentrated in the Central, Uva, Sabaragamuwa and Southern provinces, were no more theirs alone. The plantation companies may have ready sympathisers in government and even among the union leadership, but the workers’ long-pending demand is drawing widespread support in the country — as was seen in agitations that spread well outside the confines of their unions and location, to capital Colombo and even as far as Jaffna in the north.

A sea of black

In October last year, Colombo’s iconic Galle Face witnessed a sea of black, when several thousand protesters thronged the beach front, calling for a wage hike for estate workers. The crowd largely comprised youth from the Malayaha Tamil community employed in the capital in varied jobs, spanning the professional and service sectors. In an impressive show of strength and solidarity, they demanded higher wages for the workers, highlighting broader concerns about public health, education and housing needs of the community.

After the recent round of negotiations and the subsequent signing of the collective agreement on Monday, the companies have effectively allowed a wage increase of up to LKR 855, including EPF/ETF benefits and incentives tied to productivity. Photographs that appeared in local media showed a room full of powerful men negotiating the wages of a predominantly female workforce, emerging triumphant as they found common ground. All the same, they will know that the discord with workers has not ended yet.