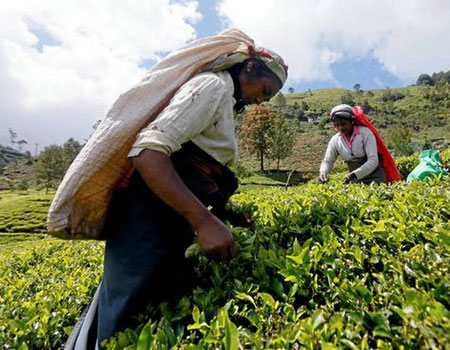 In September, the Sri Lankan rupee hit a record low of 166 per dollar (₹72.06) and has since dropped further. The government, which has to deal with a turbulent global economy, the plummeting Lankan rupee and a final year in office before the next national election, is in no enviable position. All the same, its concern and sympathy appear limited to its own plight, which, economists say, is no one else’s doing.

Meanwhile, over the last week, workers in the island’s scenic tea estates are trying hard to persuade their employers to increase their daily wage to LKR 1,000 (about ₹435). The unions are renegotiating a “collective agreement” with the employers’ federation, encountering familiar resistance from their paymasters.

The Sri Lankan government, which has to deal with a turbulent global economy, the plummeting rupee and a final year in office before the next national election, is in no enviable position

A predominantly female workforce, the tea estate workers of Sri Lanka not only earn crucial foreign exchange for the country but have also won the island’s famed brew a prominent place on the world tea map. An average estate worker today earns a basic wage of a little over LKR 500 (roughly ₹220), with another couple of hundreds by way of incentives and allowances tied to their productivity and attendance. Ask any Sri Lankan, they will tell you how little they can buy with that money, at a time when even a kilo of rice costs LKR 100 upward (₹44).

Last month, the state-run Tea Board said it may have to downgrade its full-year forecast for production due to a prolonged drought. For an industry faced with tumbling outputs, wages become the first and easiest target for cost-cutting. Consequently, the workers are forced to renew their call for higher wages. In fact, the LKR 1000 wage demand is at least two years old, and living costs have since escalated .

A 2018 study by the Kandy-based Institute of Social Development showed that an estate worker would need a minimum living wage of LKR 1,108, assuming she gets 25 days of work per month, to lead a decent life. Some unions, factoring in today’s costs, have arrived at LKR 1,300 as a fair wage. However, when producers and unions met to discuss a possible raise last week, the employers were not willing to consider anything more than a 15% wage hike on existing basic wages. Understandably, the unions are in no mood to take crumbs for their exhausting labour. Sri Lanka’s plantations, spread across its Central and Uva provinces, are among the most scenic landscapes in the country. Their lush tea bushes and pleasantly chill weather are what good holidays are made of, be it for affluent locals or tourists. All the same, plucking tea there all day, in rain or shine, braving blood-sucking leeches or stinging wasps, cannot be easy. That too with wages that still bear the stamp of the community’s Colonial-era exploitation.

In the coming week, negotiations are set to resume. While the government misses no chance to make a compelling case for increasing prices, especially in the run-up to the annual budget, will it push employers to rethink wages for estate workers, who are the backbone of the country’s export sector?