Home>Publications & Articles>Articles>Media Articles>Variety is the spice of life in sensational Sri Lanka: Why Lonely Planet was right when it said the country is the best place to visit in 2019

Variety is the spice of life in sensational Sri Lanka: Why Lonely Planet was right when it said the country is the best place to visit in 2019

If you're reading this while enjoying a cup of tea, then perhaps you should raise your mug to a pioneering young Scot, James Taylor. Just 16 when he left Scotland's shores, he introduced tea planting to Sri Lanka, opening the country's first factory in 1872 – and by the mid-90s Sri Lanka was the world's biggest exporter of tea.

And it's striking just how little the manufacturing process has changed since Taylor's trailblazing. At the Kadugannawa Factory on the outskirts of Kandy, women still pick and deliver bags of leaf tips, the drying and fermentation takes place in a vast Victorian warehouse and the tea is still milled by enormous machines shipped from Sunderland 150 years ago.

A tea factory trip is a must-do when visiting Sri Lanka (named the best place in the world to visit in 2019 by Lonely Planet) – and a grand tour with a driver the best way to see the country. Our 10-day trip (for Caroline and I to celebrate our 20th wedding anniversary) took us on a loop from the west to south-east coasts, featuring five different hotels and allowing us to get a real feel for this extraordinary island.

We had swung by Kadugannawa on the way from Negombo – a forgettable transit town a short drive from Colombo airport - where we'd decided to spend one night after the journey to the island.

Having enjoyed the comforts – and a proper night's sleep – in the brilliant business class cabin with Emirates on our flight from Glasgow, we arrived refreshed and really needn't have waited a day to get our adventure under way. With two flights every day from Glasgow, and a new route to Dubai from Edinburgh, getting to Sri Lanka from Scotland has never been easier.

Our driver for the duration of our trip, Palitha, was fantastically knowledgeable – and sharply funny. 'This is the good stuff,' he said solemnly as we'd sipped our tea at the end of the factory tour. 'What you drink at home is mostly the floor sweepings.'

Back on the road, we headed down the winding hills towards Kandy, stopping for lunch at a stunning restaurant above the banks of the Mahaweli River before heading to our hotel, the Cinnamon Citadel.

It was a showery afternoon, so we took a boat trip along the mighty Mahaweli, swollen and muddy with the monsoon rains, which quickly turned into an I-Spy of Sri Lankan wildlife: Enormous water monitor lizards, troops of hyperactive grey langur monkeys, lugubrious water buffalo, sea eagles and a tree weighed down by a colony of fruit bats.

Back at the hotel and nursing welcome sundowners, we watched as the fruit bats patrolled the river, their enormous size and strange flight like something from Jurassic Park.

More excitable grey langurs greeted us the next morning as we toured Kandy's wonderful Botanical Gardens, an immaculate and spectacular 150-acre park in the heart of the city. It was the ideal way to walk off the guilt of my traditional Sir Lankan breakfast of roti, dhal, chicken curry and spicy sambals, before we headed into the city proper for a visit to the Temple of the Tooth. 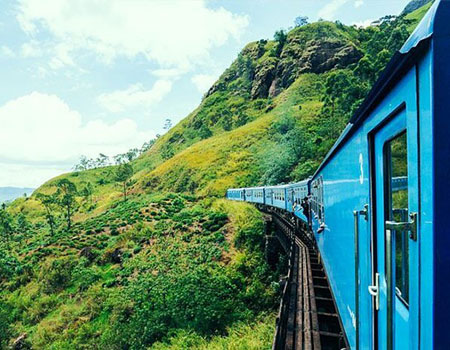 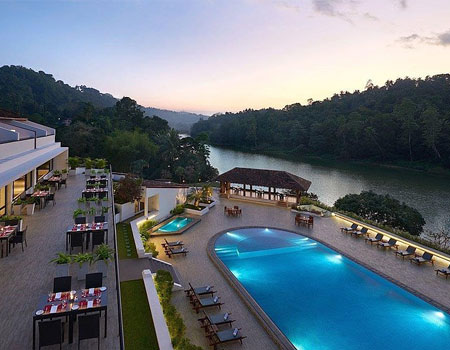 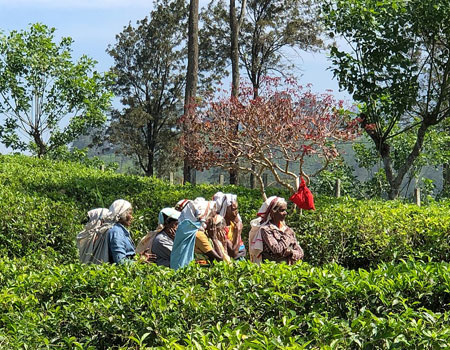 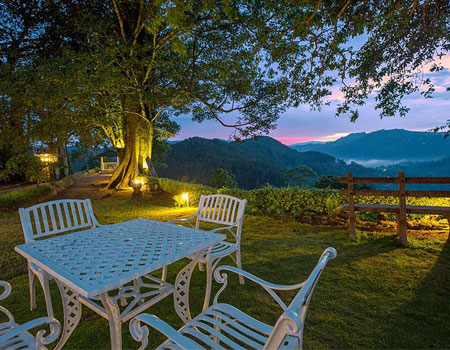 More than 70 per cent of Sri Lankans are Buddhist and the Temple is one of their holiest sites. The relic, a tooth belonging to Buddha and recovered after his cremation in 543 BC, isn't actually on display, but the temple in which it's housed attracts thousands of worshippers each day.

White-robed pilgrims file past the ornately carved and decorated wooden gallery, leaving gifts of lotus blossoms and incense, others sit praying – and it was hard to shake off the sense of being an imposter in what was clearly an intensely moving experience for the believers.

And at 3am next morning, roused from sleep by thumping drums and chanting, we witnessed a somewhat less solemn religious display as worshippers from a temple near the hotel took to the streets for a Ceremony of the Robes: hundreds of worshippers, all dressed in white, dancing noisily through the streets to celebrate the end of the monsoon season.

Palitha, who had spent the night in drivers' accommodation beside our hotel, drove us past the temple (now packed with the wandering devotees) as we headed to the city's railway station for our train south to Ella.

Often cited as one of the world's most spectacular rail journeys, the train climbs slowly (and I do mean slowly) up 1,500m (4,900ft) through mountains, jungle and tea plantations. Three classes of travel are available, with only first class having air conditioning and comfortable seats.

Backpackers always head for 2nd class, because the train doors are left open along the entire route, thus affording the most Instagram-able pictures. But we chatted to Saman, the smartly-dressed conductor, and ended up spending most of the journey in the guard's compartment at the front of the train, the jump seats beside the open doors offering a marvellous view as the journey unfolded.

The Scottish influence was evident as we chugged past plantations such as Wigtown, Braemar and Eskadale Estates. We'd packed a picnic for the trip, but needn't have bothered – at each of the many stops, vendors would board and for a few rupees sold hot peanuts with chilli, delicious vegetable samosas and cups of iced tea.

Eight hours later, giddy from the wonder of the journey, Palitha picked us up (he'd driven with our luggage in just under four hours) and we headed to our next stop, the Secret Ella, high in the mountains about the town. It's a wonderful place, a former tea plantation manager's house converted into a small hotel of just a handful of bedrooms and small chalets.

We took tea on the lawn that overlooks the valley towards Adam's Peak and the Victorian nine-arch bridge, the gentle colonial grandeur and the sublimely pretty setting a comforting end to a long day of travel.

Dinner that night was a hit and miss affair but breakfast the next morning of coconut roti, spicy chicken curry and fearsomely hot chilli sambals was fabulous. After sunrise, we walked round Secret Ella's 10-acre grounds which still border the plantations, mist draping the hills below us as the tea ladies gathered for work. 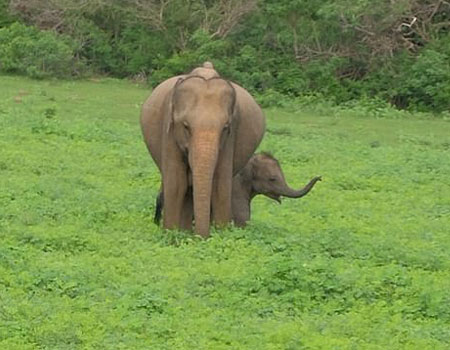 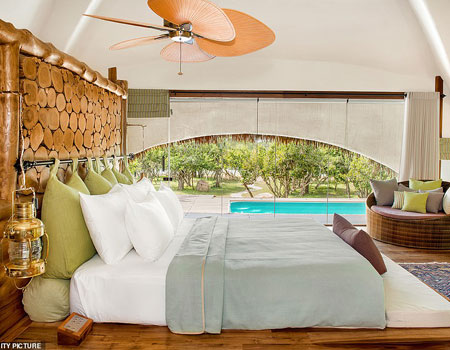 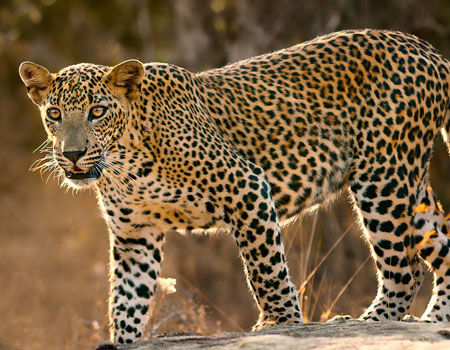 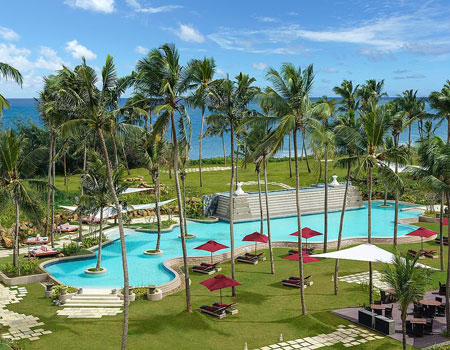 Picking just the top leaf and tips of new growth, these women gather a staggering 18 kilos a day for the equivalent of a £2.50 wage. It was a sobering thought as Palitha drove us down the mountains, the hillsides dotted with the pickers in brightly-coloured saris.

From the hills and jungles of Ella, our next drive wound south-east towards the coast and the Yala National Park, yellow warning signs featuring elephants the promise of things to come and delivered in spectacular fashion by Uga Chena Huts.

This boutique hotel of just 14 huts (actually luxurious 1,100 sq ft cabins, each with a private plunge pool and a bed the size of a squash court) sits in the heart of the national park – and the wildlife roams free. Elephants are regular visitors to the beach bordering the resort, and leopards are often spotted nearby (as we were later to confirm for ourselves).

We headed into the park proper with Janeth, our ranger guide, atop a converted pick-up truck, for an evening game drive. Two safaris each day are included with your stay at Uga Chena, and while pick-ups feel an incongruous way to observe wildlife, Janeth explained the animals are used to the noise and shape of the trucks.

We passed deer, water buffalo and crocodiles, before the driver slowed and we saw a mother elephant and her calf eating their way toward us, the baby accidentally kicking its trunk as it tried to copy mum in tugging up the grass.

Over the next two hours, we marvelled at the abundance of wildlife, stopping for a close encounter with a bull elephant blocking the road before screeching to a halt as Janeth and the driver exchanged hushed words. And there, on a flat rock plateau, a female leopard lay stretched in the last of the evening sunshine, apparently oblivious to the clicking camera shutters. We stopped taking pictures as she eventually stood and padded across the rocks, moving like liquid mercury as we sat mesmerised.

Back at Uga, we joined other guests for cocktails as everyone talked excitedly with the rangers about what they'd seen. Dinner of grilled fish, prawns and crab curry, on the decked area above the beach, Indian Ocean waves crashing in the background, was fabulous.

Next morning, after watching two wild boar root through the undergrowth by our cabin, we walked along the utterly deserted and pristine beach. The sea here's too dangerous to swim in, so we spent the morning by the pool before heading out with Janeth for a final safari drive (and memorably, a final sighting of a leopard wandering nonchalantly along the dirt track on the way back to Uga).

Our final stop was the spectacular Shangri-La at Hambantota, a fabulous beach-side resort with a special resonance for us – we'd honeymooned at the group's sister hotel in Bangkok 20 years earlier. We spent our final two days relaxing in the warm sunshine and five-star luxury of this wonderful hotel: spa treatments, fabulous staff, sublime dining and all within beautiful gardens and public spaces (and they even snuck an anniversary cake into our room).

A tuk-tuk tour of nearby Hambantota was great fun, followed by an evening river cruise (where a fisherman tried to flog me two tilapia and a freshwater lobster for 75p) to a deserted beach at sunset. Being so close to the equator, the fat sun sinks like a stone – but it does make for a wonderful spectacle. And so to home, with a suitcase-load of happy memories – and a couple of boxes Sri Lanka's finest tea. 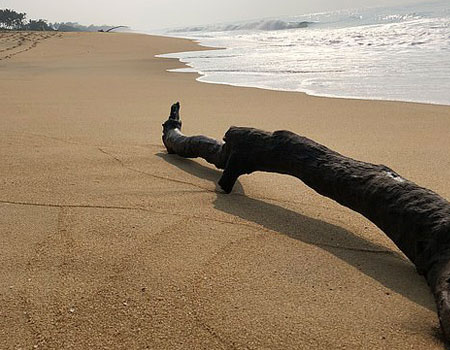