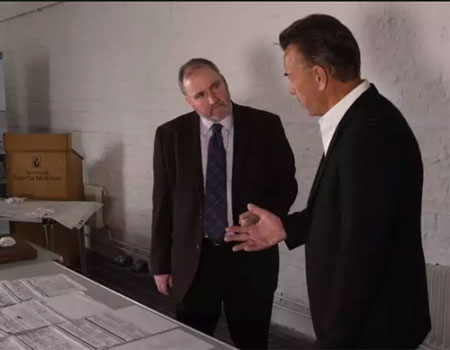 The Fermanagh roots of one of the world’s greatest entrepreneurs are to be revealed in a BBC documentary which airs on Sunday evening.

Sir Thomas Lipton – the Glasgow-born businessman who established a global retail empire and his own brand of tea in the mid-1800s – is usually listed as being born to Irish parents from Clones in Co Monaghan.

However local historian Frank McHugh has been able to prove Sir Thomas’s Fermanagh connection and his Ulster-Scots heritage.

He will appear in tomorrow night’s documentary ‘Groundbreakers: The Man Who Charmed The World’ where he explains to former Dragon’s Den star Duncan Bannatyne that the famous entrepreneur’s family came from this side of the border.

“His mother was a Johnstone who would have come over from Scotland in the plantation. His parents were married in St Mark’s Church of Ireland in Aghadrumsee.”

He continued: “This is definitely the first time that his links to Co Fermanagh have been firmly established.

“There were Lipton stores in every town in Ulster, but people would have seen him much more as Scottish.”

He continued: “Sir Thomas himself was born in Glasgow but in his autobiography he would have described himself as Scots-Irish or Irish-Scots.

“His mother and father left Fermanagh before the famine to go to Glasgow. The death of a child in Fermanagh could have been a factor in the move, and it seems they lost another child in Downpatrick as they were travelling to Glasgow.

“It was a family that very much suffered tragedy. Sir Thomas was one of six children but all of his siblings died before the age of 40. His brother John died aged 19 when Thomas was only nine.

“In many ways the fact he was so entrepreneurial was driven by so much tragedy.”

At the age of 15, Sir Thomas Lipton sailed to America to work for Ulsterman Alexander Turney Stewart. It was there he saw the future of the grocery business.

Five years later he was back in Glasgow opening his first shop and planning a chain of retail outlets across Britain and Ireland that would become the template for the modern supermarket.

Within 10 years Sir Thomas was a multi-millionaire, acquiring tea estates in Sri Lanka and meat processing factories in America. He was the first to package tea in small, convenient tins to keep it fresh.

Sir Thomas possessed an extraordinary ability to break down both class and national barriers. On his death, he donated his fortune to veterans and nurses of World War One and to the City of Glasgow.

As his business grew, Sir Thomas returned to the farms of Ulster to make deals with livestock and poultry producers around his native County Fermanagh to supply his burgeoning chain of grocery stores. The deals he made were revolutionary, guaranteeing prices and encouraging local farmers to expand and form co-operatives to guarantee supply.

Tea was Sir Thomas Lipton’s business but his passion was sailing and he used his fortune to challenge several times for the Americas Cup.

After his applications for membership of the Royal Yacht Squadron was turned down, Sir Thomas campaigned his ‘Shamrock’ yachts under the flag of the Royal Ulster Yacht Club in Bangor, Co Down. His yachts were designed and built on the Clyde and sailed by men who learned their trade along the coasts of Scotland and Northern Ireland.

In all, he competed for the Americas Cup a record five times but finished second each time. He was deemed such a good sport, he was presented with a gold cup inscribed, ‘The gamest loser in the world of sport’.