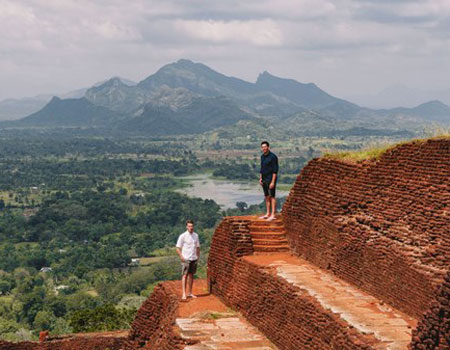 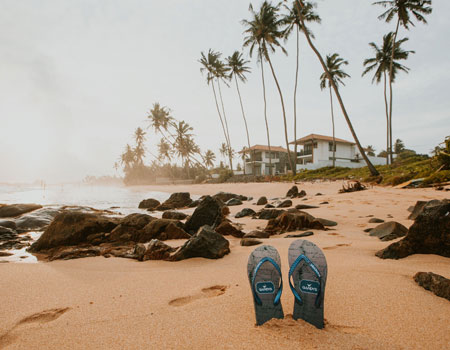 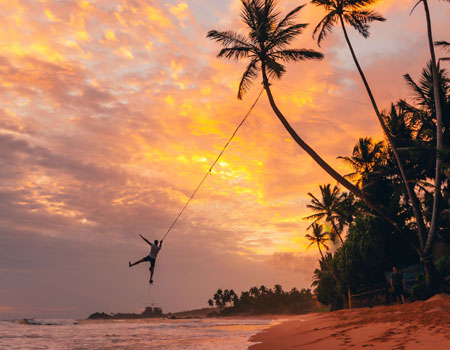 Gandys – the lifestyle brand founded by British brothers, Rob and Paul Forkan – was, they say, “inspired by travel and fuelled by giving back”.

And their motives couldn’t have been closer to their hearts. For those unfamiliar with the Gandys story, Rob and Paul, along with their younger siblings Mattie and Rosie, were on holiday in Sri Lanka when the 2004 Boxing Day tsunami hit.

Birth of an ethical brand

Before the tragedy, Kevin and Sandra had swapped the rat race for a life of travel, and the family had spent the last five years exploring India, even volunteering at orphanages and slums.

Gandys, which started with flip-flops but has grown into a whole fashion and lifestyle brand since its 2012 launch, was a way of continuing their parents’ legacy, giving back to the community that shared in the devastation, and helping other orphans. They also set up a charity foundation, Orphans for Orphans, to which 10% of their profits goes, and opened a children’s home in Sri Lanka in 2014 (a second, in Malawi, was opened last year).

It also enabled the brothers to carve out a future for themselves, a triumph-over-tragedy tale the whole family would be proud of.

Now, they’ve teamed up with tour operator Kuoni, to create a Sri Lankan tour based on their favourite sights and hotspots, from Colombo to Yala National Park and the coastal city of Galle. It’s a first for Kuoni, who’ve pledged to donate a percentage of all sales from the Kuoni-Gandys Sri Lanka Adventure to Orphans for Orphans.

The itinerary takes in the Sigiriya Rock Fortress, Kandy, the tea plantations of Nuwara Eliya, the Nine Arches Bridge of Ella and the Minneriya National Park. And while travellers will be accompanied by a driver and guide, I have the privilege of being shown around by the Gandys themselves. 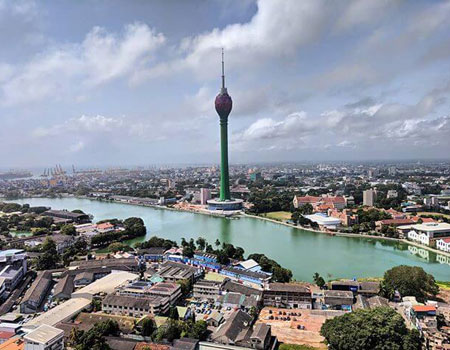 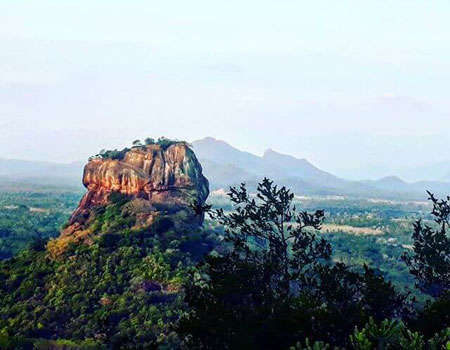 Arriving at Colombo Airport after a 10-hour flight from the UK, we’re refreshed with coconut water and juicy rambutans (a red, hairy fruit that’s a popular snack across Asia), as we set off by road to Habarana, absorbing the ever-changing landscape, as our scholarly guide, Aloy, regales us with a potted history of Sri Lanka.

Engulfed by the sweet fusion of bougainvillaea flowers, heat and gasoline, and surrounded by lush green landscapes and dizzyingly tall palm trees, Sri Lanka is less intense than India but, in ways, similar, with the same spluttering auto-rickshaws, harried drivers dodging laconic cows and children racing to school in Daz-white uniforms.

A fortress in the sky

Our first stop is the Sigiriya Water Gardens Hotel, where, surrounded by lakes and mountains, the decadent deluxe villas are a perfect escape from the modern world. As sunbeams awaken the blossoming lotus flowers, we head to Sigiriya Rock Fortress, near the town of Dambulla. A UNESCO World Heritage Site, the 200-metre-high rock is the ancient archaeological site of King Kasyapa’s palace.

The formerly gilded palace walls, which were adorned with ornate frescos, are today bare rock, but the majesty of the edifice is undiminished, beckoning visitors to scale its 1,200 steps. Beginning with a steep incline, the ‘Lion Rock’, as it’s known, plateaus into two tiers, where the King’s 500-strong harem once assembled.

After the king’s death, the royal palace was abandoned. It was used as a Buddhist monastery until the 14th century and even today, monks flock to the site, albeit now with mobile phones in hand. The Sigirya Rock was also the backdrop for Duran Duran’s Save A Prayer video.

A two-hour trek, and the stunning panoramic view of the lush Sri Lankan plains, that inspired some of the Gandys brother’s designs, is ample reward for your efforts.

Of course, no trip to Sri Lanka would be complete without elephants. At the Minneriya National Park in Habarana, we see 300 of the gentle giants, who dwell in the surrounding forests of Matale, Polonnaruwa and Trincomalee and congregate daily at a watering hole in the park.

We watch in awe as an elephant family saunters past, heads bobbing, seemingly oblivious to the convoy of jeeps trailing them. There’s even a two-day-old baby, treading along tentatively, stopping now and then to suckle. 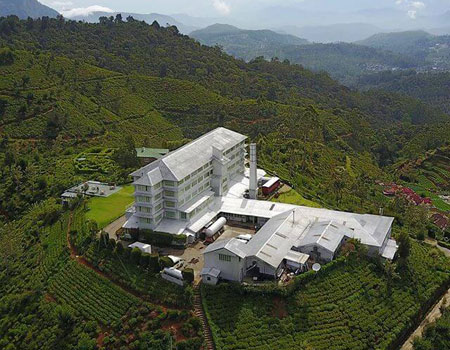 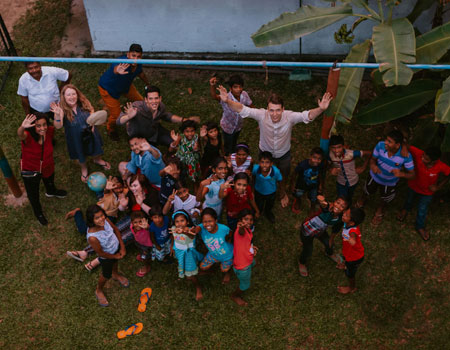 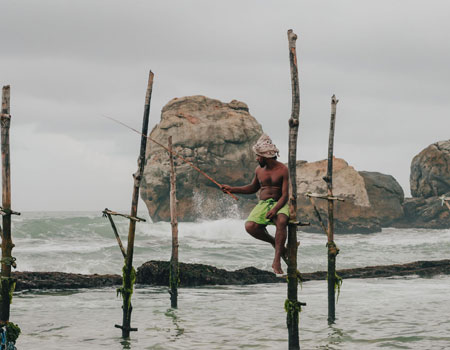 Later, a five-hour drive takes us to the mist-shrouded tea plantations at Nuwara Eliya. After a whistle-stop tour of the factory, which supplies tea to UK supermarkets, we walk to the plantations, where tea pickers smile for cameras as they toss fresh leaf tips over their heads and into baskets.

After a night spent in the Heritance Tea Factory hotel, which sits high up in the plantations, we set off on the two-hour journey to Ella, where nestling into the hillside, the picturesque Nine Arches Bridge is a draw for tourists.

But it’s poignant for the Gandys brothers for very different reasons; it was here they fled the horror of the tsunami as children.

“We followed the train tracks to get to the nearest town for help,” explains Rob. “We’ve come full circle. Today, we’re here with Gandys. Now we can do something to help those people who helped us.”

Another five-hour drive from Ella, our home tonight is the Cinnamon Wild resort in Yala, where wild animals wander the reserve – and the possibility of crossing paths with a leopard, or finding an elephant loitering outside your lodge is exhilarating.

A rewarding end to our visit

Our tour culminates in a visit to the Gandys Kids Campus in Galle, run by golden-hearted matriarch, Mama Tina. Here, children aged four to 18 receive medical care, educational opportunities and nutritious meals, completely funded by Rob and Paul from the sales of Gandys merchandise.

Despite a language barrier, Paul says they have no trouble communicating with the kids. “You smile and they smile back,” he says. Like meerkats, children pop up from behind a wall to greet us and the campus is filled with giggling.

At dawn, we head out on auto-rickshaws to nearby Coconut Hill, where palm trees stand in military formation. As a lone fisherman balancing on stilts reels in his haul, the sea – once so devastatingly powerful back in 2004 – now ebbs gently, kissing the shore as if in contrition.

It’s a peaceful, tranquil scene – much like all of beautiful Sri Lanka – but the tragic history of the tsunami can never be forgotten. Rob and Paul’s determination, and new collaborations like this, will ensure positivity continues to bloom.

How to get there

Tsunami Kids: Our Journey From Survival To Success by Rob and Paul Forkan is published by Michael O’Mara Books, priced €18.79. Available now.