Trouble on the plantations 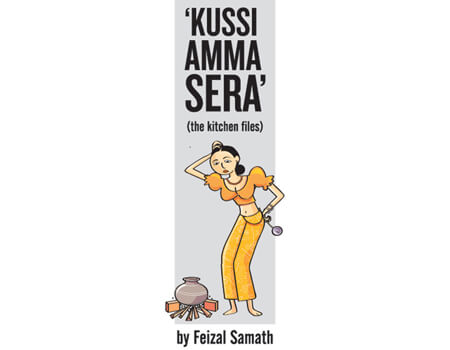 The recent strikes and protests by railway workers and doctors had grabbed the attention of the ‘gossip’ trio – Kussi Amma Sera, Mabel Rasthiyadu and Serapina.

It was a windy Thursday with the morning rays of the sun coming through the leaves of the margosa tree where the trio was seated sipping cups of tea. “Balanna…..dumriya kattiyage veda varjanaya hinda minissu kochchara duk vidinivada kiyala (See……because of the railway strike people are suffering),” said Kussi Amma Sera.

Sipping my steaming cup of tea which Kussa Amma Sera had brought earlier, I watched the trio from my office window as I too reflected on how unfortunate Sri Lankans are to face these uncertainties and troubles in their daily lives.

Interrupting my thoughts, the phone rings. It’s Karapincha Perera, the ‘tea kade’ gossip on the line. It was a welcome call as I hadn’t spoken to him for a long time.

“Hey Karapincha, what’s cooking? How are you?” I asked, pleasantly welcoming his intrusion into my Thursday morning reflections.

“Fine…..fine. I say…. I was a bit perturbed by the story in the Business Times last week about tea factories closing down. What is happening to the tea industry,” he said. “On top of all these strikes, this is also a crisis in the country,” he continued.

“Agree,” I said and we conversed for a long time thereafter on the tea industry and the crises it has been facing.

According to the Business Times report, every week one or two factories are closing in the South of the country where a large segment of the low grown tea land is located. This is because production costs have become higher than the selling price.

It was noted that changing consumer preferences and a dip in demand and production levels have also contributed to the current crisis.

The Sri Lanka Factory Owners’ Association President Harith Ranasinghe was quoted as saying that about 48 factories out of a total of 720 factories that includes factories owned by regional plantation companies (RPCs) have shut down.

Producers said that “stable prices at auctions must be achieved and it is important to ensure that a different wage model is established for company estates in addition to sustaining the existing marketing and finding new ones”. An industry official was quoted in the newspaper report as saying that about 30 factories are operating only about twice or thrice a week.

A declining trend in tea prices was recorded from early 2018 and continued till the end of the year. Average auction prices of high, medium and low grown teas at the Colombo Tea Auction (CTA) were significantly lower than the corresponding prices that were observed in 2017.

The industry – regional plantation companies – has been battling crises on many fronts: Wage demands, unpredictable weather, lower prices and the crippling glyphosate dilemma in which this key weedicide application on tea land was banned for many years. Trade with Iran, a major tea buyer, has also been affected by trade sanctions imposed on Iran by the US.

The current tea model where workers live on estates and their economic needs are supported by the estates is fast becoming outdated and uneconomical. While the number of workers living on estates has reduced over the years forcing plantations sometimes to seek outside labour, companies are still compelled to look after the same number of families living on estates. Many of these workers find more lucrative work outside the estates and return in the evening to reside in their estate homes.

RPCs have been pushing for a new production model where workers are provided plots of land to grow tea and this tea is purchased by the companies. This cultivation is done during their spare time while they still work on the estates. Such a model will not only reduce costs to plantations but increase productivity while providing workers a higher income – a win-win for all stakeholders. Unions, however, are opposing this move.

Tea is not only synonymous with Sri Lanka’s economy and heritage but also ingrained in our culture. Who doesn’t enjoy the sloping tea gardens in the central highlands with their breathtaking views particularly when travelling to Nuwara Eliya by train or by road? Many Sri Lankans enjoy the beauty of the tea estates, enjoying that fresh cup of tea, walking along tea trails and relaxing, for example, in historic tea planter cottages transformed into cozy boutique hotels by a multitude of companies.

But the crises facing the tea industry are threatening its very, over 150-year old existence and its hallowed contribution to the country’s economy.

Tea is still Sri Lanka’s top agriculture export with US$1.4 billion in value terms in 2018, dropping, however, from $1.5 billion in 2018. The other closest agriculture export in 2018 was spices with $360 million, with coconut and rubber – once huge economic gainers – dropping in export values.

As I reflected on these thoughts while ending the conversation with ‘Karapincha’, Kussi Amma Sera walked into the room with my usual second cup of tea, saying: “Me davaswala minisunta getalu godak thiyenawa. (People are having many problems these days).”

I nodded in agreement, thinking about that cup of tea in an exotic tea bungalow and wondering what is in store for the tea industry in the next 150 years.