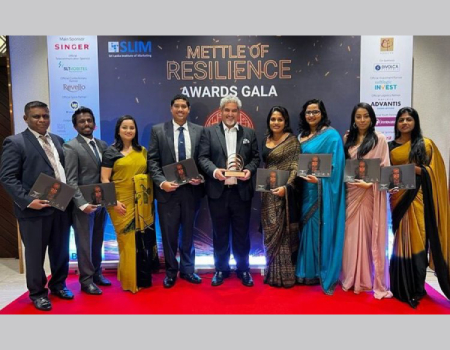 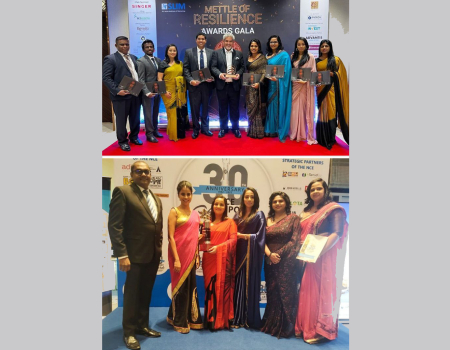 Anverally and Sons (Pvt) Ltd., a leading exporter of Sri Lankan tea, whose unique blends have captured the attention of connoisseurs worldwide, has ended 2022 on a high note, winning two prestigious awards for export performance and brand excellence.

The 132-year-old company was presented the Silver award in the ‘Extra-Large’ category at the 2022 Annual Export Awards of the National Chamber of Exporters of Sri Lanka (NCE) and received the Export Brand of the Year – Bronze award at the 2022 Brand Excellence Awards presented by the Sri Lanka Institute of Marketing (SLIM) for its innovative export brand – ‘Tea 4U.’

Notably, this was the 10th NCE award won by Anverally and Sons since 2012.

Themed ‘Recognising, Inspiring and Strengthening,’ the 30th NCE Annual Export Awards honoured exporters who are the frontrunners of the country’s economy. The Silver award Anverally & Sons won recognises not only the volume of exports but also the Company’s excellence in other key aspects, such as value additions, entry into new markets, innovation, research and development, brand building, compliance, ethical practices, and CSR activities.

Meanwhile, the SLIM Export Brand of the Year award, recognised ‘Tea 4U’ as one of the most promising export brands of the year that demonstrated excellence and success in international markets. This was based on the brand processes, that drove the target audience to value the brand and its key elements, its performance in the marketplace including customer satisfaction and loyalty, brand awareness and reputation, and business performance, among others.

Incidentally, this is the first win for the ‘Tea 4U’ brand whose colourful range of refreshing Ceylon iced tea is widely available in local supermarkets too. In 2020, Anverally and Sons’ ‘Al-Otuor’ brand -- known for its distinctive Earl Grey flavoured tea -- also won the same title at the SLIM Brand Excellence awards.

Commenting on the Company’s double win, Anverally and Sons Chairman Mr Mohamed Anverally said: “We have been a consistent winner at the NCE and SLIM awards over the years. Despite the adverse economic conditions that have posed challenges such as difficulties in fulfilling orders due to fuel and power shortages and policy uncertainties, the rising cost of raw materials and other factors such as consumer attitudes towards the prices of tea, we have experienced robust growth in the targeted international markets. These awards recognise our resilience and give us much-needed encouragement to keep moving forward. We are especially delighted about the recognition ‘Tea 4U’ received as it is a brand that was launched to signify the connection between tea and people around the world who are passionate about the beverage. With over a hundred different varieties available under ‘Tea 4U,’ the brand has endeavoured to personalise the tea-drinking experience of our customers, which was also recognised by the SLIM award.”

The NCE Export Awards programme is a flagship event in the Sri Lankan business calendar and is designed to recognise and reward outstanding performance of exporters. The SLIM Brand Excellence awards programme is a celebration of brand excellence at a national level and a recognition of the outstanding efforts of top-notch marketers. Through this event, SLIM endeavours to not only encourage best practices in branding but also to raise local brands to global standards.

Established in 1890 by the great grandfather of the present Chairman, Anverally and Sons employs more than 1,000 people today and exports Ceylon Tea to over 100 countries. The Company’s selection comprises of a diversified tea range with a variety of packing options. Anverally has established a range of international brands such as Anverally Tea, Al-Otuor, Sultan, Tea 4U, and Taj – that represent the regional preferences of tea. Its latest diversification initiatives include the offering of Ceylon King Coconut water under the brand name Coco.

In addition to the popular black, green, and flavoured tea ranges, the ’Tea 4U’ brand offers an interesting assortment of Ceylon iced teas, tea pods, and instant tea premixes which are new entrants to the product range.