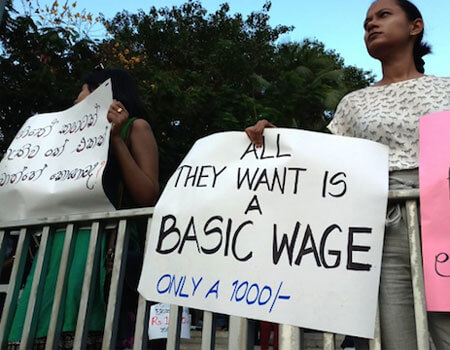 If the plantations can't afford a daily wage of 1,000 rupees, let alone other basic rights, it's time for new management

Civil society organizations and relatives of tea workers stage a protest in Colombo on Jan. 15 urging the government to increase their minimum daily wage to 1,000 Sri Lankan rupees (US$5.62). (Photo by Quintus Colombage/ucanews.com)

Plantation workers in Sri Lanka have been clamoring for a decent daily wage for years, as they struggle to feed their families and work in unsafe conditions and amid all kinds of weather.

They staged several rallies in Colombo in January alone seeking 1,000 rupees (US$5.7) a day, but the plantations and tea companies refuse to acquiesce to their demands.

This is an egregious state of affairs. We have to respect these workers and treat them as normal citizens who deserve a basic level of respect and human dignity, especially in light of their contributions to society by sustaining this lucrative, export-driven part of the economy.

This is the chief concern of the "1,000 movement," a collective of trade unions, people's organizations, community and student groups, and individual social activists who are fighting to ensure the workers receive a fair daily wage of 1,000 rupees.

The movement refuses to accept the plantations' claims that they cannot afford to pay this much as it would adversely affect their business and hurt the industry.

Even 1,000 rupees is hardly a living wage. If we look at construction site workers, they receive at least 1,200 rupees a day, while those working in the private sector earn from 1,200 to 1,500 rupees.

According to the calculations of two professors, including one from the University of Peradeniya near Kandy, the average tea worker needs to earn 27,707 rupees a month to enjoy a decent life.

If the companies are not in a position to pay this, it suggests they are being mismanaged.

Statistics indicate the plantations are not struggling, as they contend, but are expanding and trying to maximize their profits by keeping the cost of labor as low as possible.

Tea laborers, especially women, have to trudge kilometers every day from the humble abodes provided for them to the tea fields.

Most days they don't have time to eat lunch with their families. They are on their feet all day and have to carry heavy baskets in all kinds of weather while trying not to injure themselves on the uneven terrain, or succumb to respiratory or water-borne diseases.

There is also the risk of being attacked by wild animals, including leopards.

The workers are often exposed to pesticides and insecticides, which the United Nations' International Labor Organization (ILO) cites as one of the major health and safety hazards they face.

They work up to eight hours a day, six or seven days a week. Sometimes they are forced to skip tea and lunch breaks to meet demand from the export market. Their managers care little if they are hungry, tired, or sick.

Even when they are struck ill, they must report to work and keep on going without any breaks. They are never paid overtime, and they are not entitled to paid leave.

In other words, international labor rules are being grossly violated in this industry.

I had the opportunity to work with a tea plantation community in Central province for two years, so I got to experience the horrible conditions the workers and their families are forced to endure.

They are given tiny "line rooms" that were built decades ago under British colonial rule. I've seen up to six people sleeping in one of these rooms in incredibly cramped conditions.

Their children also suffer. They are deprived of a healthy diet, as evidenced by the high rate of malnutrition, as well as a good education, making it even harder for them to snap this cycle of grinding poverty.

According to the law, the estate owners must provide basic educational facilities, creches, and so on. Their failure to do so condemns the workers and their offspring to a future of poverty.

Given how far most of the plantations are from towns and schools, among other factors, the daughters tend to drop out of school early while the sons rarely make it through secondary education.

As former U.S. president Franklin D. Roosevelt once said, "No business which depends for its existence on paying less than living wages to its workers has any right to continue in this country."

Perhaps the plantations should remember this.

As for now, however, it is the workers' rights that are being abused — no one is questioning the big companies' right to exist. But what we should be talking about is a different system of ownership, management and control.