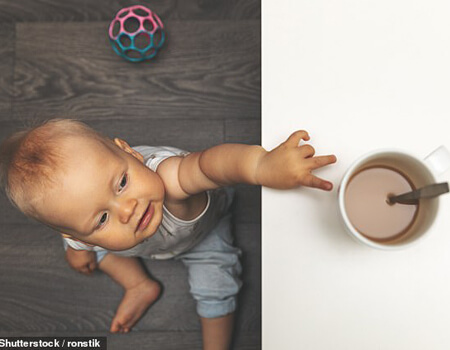 NHS figures reveal 35,000 under-16s in England and Wales have needed specialist care for burns in the past five years.

Half of these (17,052) incidents involved scalds children endured from hot food as well as tea and coffee.

The Royal College of Surgeons and the British Burns Association have now issued a warning over the dangers of hot drinks.

They have both urged parents to keep hot drinks away from the edges of tables and worktops, where they can be reached by children.

And the bodies, which analysed the data, said cups of tea can still scald children 15 minutes after they have been made.

Both the RCS and the BBA are backing a SafeTea campaign to prevent serious scalds from boiling mugs of tea or coffee.

They warned children can face years of 'gruelling' operations after suffering burns that are entirely preventable.

Andrew Williams, a consultant plastic surgeon at Chelsea and Westminster Hospital, who specialises in burns, said: 'Burn injuries are common and potentially devastating. Tragically they occur too often.

'All it takes is for a small child to pull a kettle cord, or knock a cup of tea over, and they can be scarred for life.

'Every second counts when it comes to treating a new burn, so it is vital that parents know basic first aid - especially the importance of running scalded skin under cold water, for example.'

Patients may need multiple operations and skin grafts as they age because their skin continues to grow.

Mr Williams said: 'Recovering from a serious burn or scald can be physically gruelling and it can impact the whole family.

'In young children, scar tissue might not grow with them, with the resulting need for potentially years of operations and therapy ahead of them.

'The road to recovery can also be psychologically very challenging, especially if a person has visible scars.

'This is why it is so important that we all – and particularly parents of young children – are aware of the simple steps they can take to reduce the likelihood of such accidents from happening the first place.'

In 2018 alone, there were 6,645 child admissions to designated specialised burn NHS services in England and Wales.

The team of medics are trained to deal with the most complex of burns, and are different to those in A&E.

A total of 3,119 (47 per cent) of these children suffered burns from hot food or drink spillages. The rest were from other causes such as fire or oven doors.

More than half - 1,576 - involved children under two years old, almost 900 of which could were caused by spillage from tea or coffee specifically.

The statistics don't include minor injuries such as when patients are treated by a GP surgery or in A&E.

Between 2014 and 2018, when the data was collected, there has been a decrease in the number of burns by eight per cent, and 14 per cent for spillages.

Around 130,000 people with burn injuries visit emergency departments each year and approximately 10,000 are admitted to hospital.

The Royal Society for the Prevention of Accidents (RoSPA) said burns and scalds disproportionately affect very young children, but also older people, due to the sensitivity of their skin.

A spokesperson told MailOnline: 'RoSPA recommends that hot drinks are kept away from the edges of tables and worktops because they can still scald a child 15 minutes after they've been made, and we also advise parents and carers not to hold a hot drink and child at the same time.

'Hot bath water is responsible for the most serious scald injuries among young children.

'We advise running the cold water first, and always testing the water temperature with your elbow before a child gets into the bath.'

Katrina Phillips, chief executive of The Child Accident Prevention Trust, said: 'Put your hot drink down somewhere high enough to be out of your toddler’s reach.

'And put your baby in their chair or bed before you pick up your drink. It soon becomes a habit you don’t even have to think about.'