There’s more than meets the eye in the Rs. 1000 daily plantation wage issue 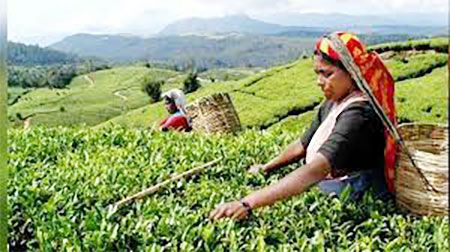 The plantation worker wage per day of Rs. 1000,approved by the government, would ensure a monthly income of Rs.25,000, worked out at 25 working days each month. But there is more than meets the eye in this situation.

Plantation sources informed us that apart from the wage, all allied benefits relevant to the wage, for  example, extra earnings deriving from what are called ‘over kilos’, would not be applicable now. In consequence, the earning capacity of women, mainly, would be gravely affected. The plucking norm, usually set at 18 kilos or less, could be achieved by most pluckers.  Kilos exceeding the norm earned Rs. 40 per kilo.

Accordingly, the take home wage, before the wage increase, would have been around Rs. 720, the basic daily wage, plus the ‘over kilos’ plucked. That is, if 30 kilos were plucked,  each plucker  would earn the basic wage plus the earnings from 12 extra kilos. This would amount to a total wage of about Rs. 1230 per day.

‘Over kilos’  exceeding the norm were achievable. More industrious pluckers could pluck as much as 20 kilos over the norm. Their daily income would amount to Rs.1550, on this basis. This sum multiplied by 25 working days would mean that such workers would have a take home wage of around Rs.38,750 per month.

However, the wage increase would deprive these workers of the ‘over kilos’ earnings, because the wage now applicable, and associated conditions, would not provide for such extra earnings.

This reporter’s requests to plantation trade unions for their comments on this issue did not elicit any responses.

The general view of most other sections was that limits placed on the take home wage would exacerbate an already acute man power crisis and provoke  an accelerating exodus of young people from the plantations for jobs in  cities. In consequence,   the  formal plantation sector, unable to cope with loss of man power, would be increasingly abandoning arable tea land. In some instances, as much as  100 to 200 hectares  have been reportedly abandoned in each plantation, because of a lack of man power.

We also requested for responses from the tea smallholder sector and the tea factory owners.  Both sections reported that they were ‘in disarray’.  The tea smallholders were distributed fertilizer at heavily subsidized rates prompting over fertilizing. The consequences were  soil degradation resulting in negative production results. The tea factory owners, already threatened with reduced production, are unable to cope with their loan payments. Some said they would have to close their factories.