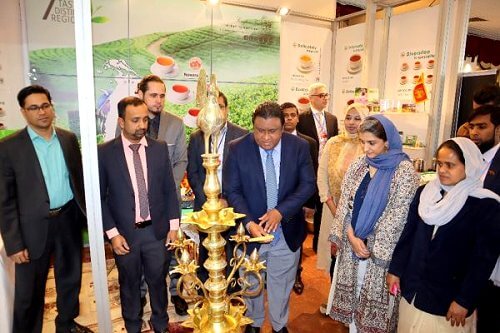 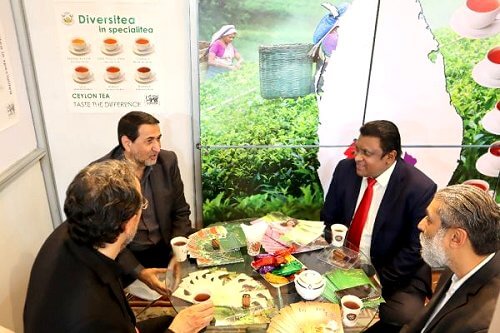 Oct 29, Colombo: The Sri Lanka Embassy in Iran in collaboration with Sri Lanka Tea Board participated in the 18th International Seminar and Exhibition “The World of Tea” at the Parsian Esteghlal Hotel premises in Tehran from 24-26 October 2022.

The World of Tea Seminar and Exhibition, which is annually held in Tehran, is a major tea trade fair in Iran and the West Asia Region. It is generally considered as the productive platform for foreign exporters to establish direct connections with importers, retailers, distributors and other business partners. The Ceylon tea stall was one of the most popular booths among visitors.

After the lighting of the traditional oil lamp, the Ceylon tea stall was officially opened by the Ambassador of Sri Lanka G.M.V. Wishwanath Aponsu, Deputy President of International Affairs of the Iran Chamber of Commerce, Industries, Mines & Agriculture Dr. Alireza Yavari, Managing Director of M/s Samley Tea Kavith Balage, Director of M/s Pankeh Tea Sara Shariati Saravi and other business representatives. A range of Ceylon tea varieties were on display and discussions on new ways to retain the Ceylon tea market and promote Ceylon tea in Iran took place.

During the inaugural ceremony, Head of Iran Tea Association Hamidreza Movassaghi welcomed all participants at the 18th Tea Seminar & Exhibition and emphasized the need for collective engagement to uplift the tea market and tea industry in the Islamic Republic of Iran.

Further, he underlined that all tea exporters and importers who work with the Iran tea market should convene regular meetings to discuss the progress, obstacles and way forward of the market. Director General of the Ministry of Agriculture Dr. Changiz Jahangiri also made his remarks.

While thanking the Head of Tea Association Movassaghi for the invitation extended to Sri Lanka to attend the event, Ambassador Wishwanath Aponsu expressed that Sri Lanka’s prime objective is to supply healthy tea of the finest quality to the Islamic Republic of Iran.

The Ambassador met several prominent business personnel and facilitated many business opportunities for the Sri Lankan tea exporters who were part of the Exhibition.

At the discussion with the Ambassador of Kenya, Joshua I. Gatimu, Chairman Joho Mithamo Wasasuna and senior officials of Kenya Tea Board, joint partnership with regards to existing issues, including tea quality and tea promotions in Iran, were discussed, enabling all tea producing countries to secure their market.