The British ad propaganda & the journey from tea to chai 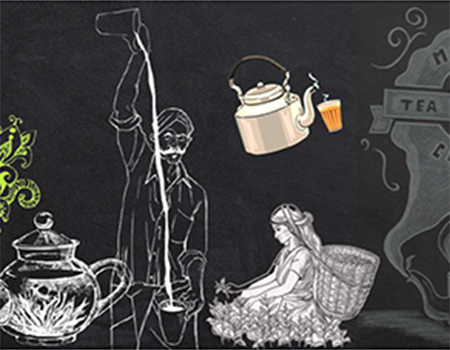 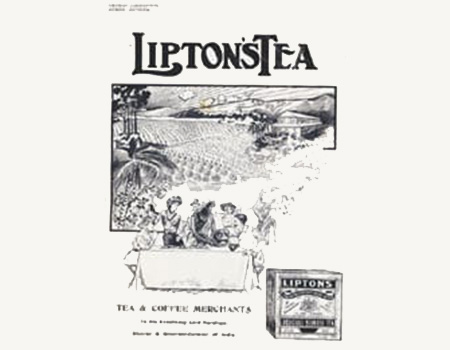 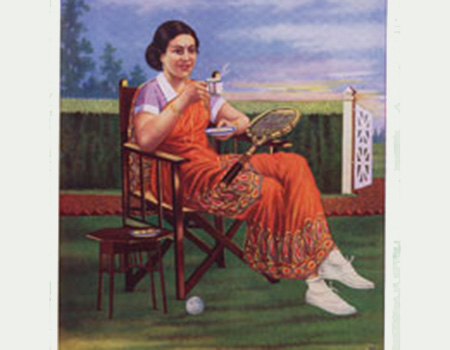 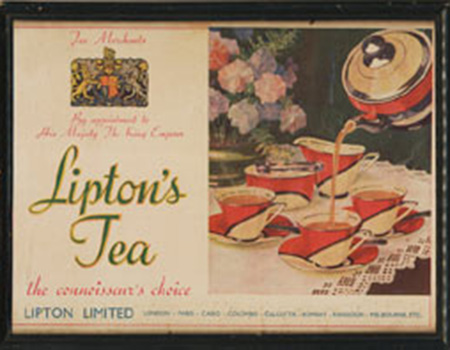 Like diamonds and Christmas, the habit of drinking tea is among the world’s most successful ad campaigns. It might seem that chai is the most wanted beverage in India, but in fact its popularity is the result of a planned ad propaganda by the British.

Camellia sinensis, the tea plant, is believed to have originated on the southern slope of the Himalayas. It’s wide consumption and cultivation has been prevalent in China since ancient times. There are no records of tea cultivation in Indian subcontinent until the late colonial period.

In India, the cultivation of tea started because of the British, who had acquired the habit of drinking tea from the Dutch and ultimately from the Chinese. They strived for an alternative to break the monopoly on the supply of leaves held by China. In 1830’s the British began with experiments of tea cultivation in the hills of Bengal and Assam.

Philip Lutgendorf Tea writes in an essay that particularly the Darjeeling kind was introduced in plantations in North East India in the 1830s, as the British sought to destabilise the Chinese monopoly over the product.

Robert Bruce, a Scottish adventurer noticed tea-like plants growing wild near Rangpur, Assam. In early 1830, his brother Charles had sent a few of these leaves to a botanical garden in Calcutta to be properly examined and it was then that this plant was officially classified as a tea variety and named Camellia sinensis var. Assamica.

The first English tea garden was established at Chabua in Upper Assam in 1837. The Assam Tea Company began the commercial production of tea in the region around 1840.

As tea cultivation started flourishing in India, the British started to export tea leaves to Britain, and this expanded the supply of inexpensive tea, coupled with the ready availability of cheap sugar from plantations in America.

During the Industrial Revolution the expansion in tea export transformed the diet of the British working class drastically, who increasingly relied on sweetened tea with milk as an easily-prepared source of energy-boosting caffeine, calories, and carbohydrates.

Initially tea plantations in India were meant to produce tea for foreign consumers only. Around the turn of the 20th century when tea consumption in Britain and the US began to stagnate, the British, ever the opportunists, decided to look to India to expand their markets.

Hence, the Tea Cess Committee was established as a British government propaganda unit in 1903 to propagate consumption of tea. This board was funded by the proceeds of a tax on the export of tea. The government neatly renamed this as the Indian Tea Market Expansion Board later in 1937.

Tea took time to get popular all over the country. The process was slow and dependent on many factors like urbanisation, improved rail and road transport and increased human mobility, the breakdown of caste and caste-related dining practices, and the rise of advertising and aggressive marketing.

Moreover, the Tea Cess bill was countered by the arguments of Gandhi and other nationalists that the consumption of this “imperialist” and capitalist beverage was both physically and politically weary for Indians.

Here’s an advertisement that was made for the Thomas Lipton Company, published in the “Coronation Durbar Souvenir” edition of the Express in 1911.

The advertisement portrays tea being offered to smartly dressed English ladies and a gentleman from brown-skinned colonial subjects, in front of a tea estate. Yet this imperial infusion, steeped in porcelain "china” pots, accompanied by pitchers of warm milk and spoonfuls of sugar, had already begun to be savoured by the bhadralok residents of Calcutta.

During pre-independence, tea advertising targeted the rich and the middle-class families who accepted modernity in costume and furnishings. People who could afford the expensive cutlery required to brew and serve the beverage.

Below are two advertisement posters from Priya Paul’s archive that shows what kind of audience was being targeted through the advertisements before Independence.

Darjeeling and Assam tea remained comparatively expensive. Most of the pre-Independence advertisements aimed at a middle-class audience. Gradually, the cheaper grades of “dust” and “fannings” also began to be marketed. Brooke Bond’s “Kora Dust" is one such example. The advertisement depicts chai being enjoyed by the villagers and tribals in rural “folk” festivals.

Tea was foreign to Indians – and for that matter Europeans – that the Tea Board's early ads had to include instructions on how to brew the product. The board also distributed small packets of tea, available for one paisa, in villages for the people to become familiar with the taste of tea.

Vernon Wickizer, in a book on the political economy of tea, coffee and colas, mentioned that the tea shops that exist at railways stations and docks today are a product of the Tea Board's campaign. 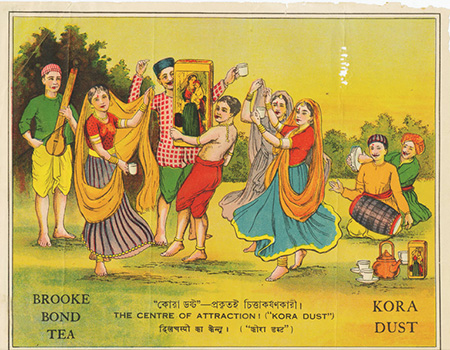 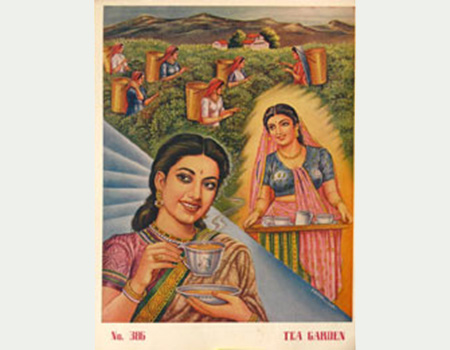 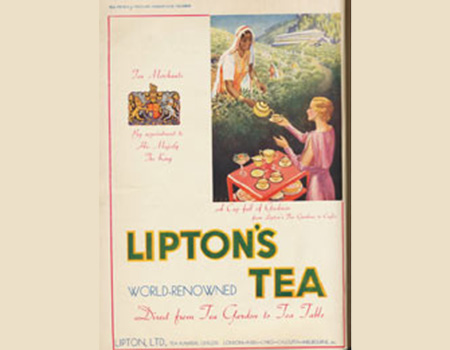 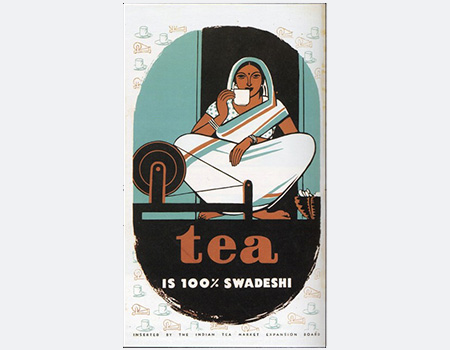 WHEN DID CHAI TURN OUT TO BE A NATIONAL HABIT?

As documented in articles, chai popularised extensively in India post-independence. This took place after the ensuing transfer of majority ownership in tea estates and in tea wholesaling companies from British to Indian hands. With this there was a visible shift in the advertising of the product. The recipient changed from elegantly-dressed English woman to a richly ornamented Indian lady.

In 1953, the Tea Board of India replaced the "Indian Tea Market Expansion Board" of the colonial era with the "imperial brew" and declared it to be "swadeshi".

According to an article, there’s a mention of an extraordinary poster, contained in the 2005 Kolkata exhibition and Bhadra’s accompanying catalogue essay.

It depicts this ideological assertion, with its patterned juxtaposition of Gandhian and Congress Party spinning-wheel symbols (charkhā) with tea cups, and its central image of a modest, sari-clad spinner enjoying a refreshing break.

Tea companies aggressively started marketing tea as an energy-enhancing drink conducive to both individual, civility and national health. Ads emphasised tea’s ability to deliver alert,energised citizens, free of the “lassitude”. The ads were created to change mind sets and introduced tea as a daily routine to them. 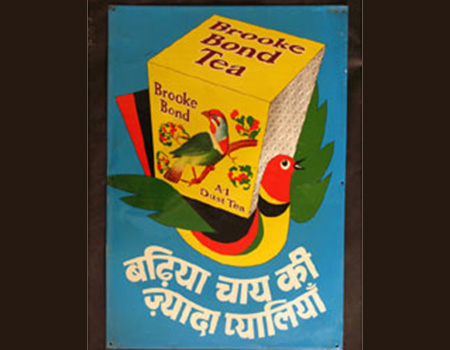 As documented in Philip Lutgendorf’s article 'The Triumph of Tea' in India as documented in the Priya Paul Collection it’s said that the mass marketing and consumption of affordable tea also depended on changes in the technology of tea processing: the gradual replacement of full-leaf black teas produced by the “orthodox method” with "crushed, torn, and curled leaf”, that permitted tea producers to double their output and consumers to brew stronger infusions from smaller quantities of the resultant potent and tightly-rolled leaf granules.

The slogans were written in Hindi that boasted about saving “bachat”. This helped spark the expansion of local chai shops (tapris), spaces that allowed people to gather and exchange news or opinions. The people then started to develop the love for kadak chai (strong flavoured tea).

Gradually chai became popular in every household and nukkad of the country and now it’s the most served and savoured beverage in India.