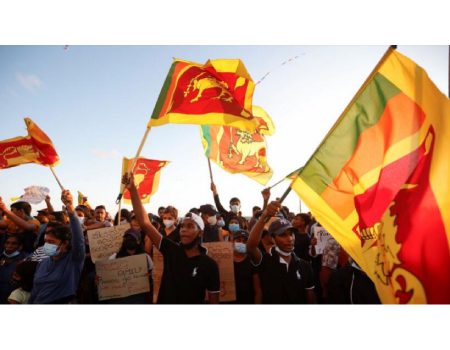 Malik weighed in on the island nation’s unprecedented economic crisis as the emerald isle’s 22-million population is facing crippling 12-hour power cuts and an extreme scarcity of food, fuel, and other essential commodities, including medicines, for the past few weeks.

Data shows that the tourism sector contributes 12 per cent to the gross domestic product (GDP) of Sri Lanka and is the fifth largest source of foreign revenue in the country.

Fortunately, tourism has been largely untouched, despite the growing economic turmoil.

“Tourism continues without any untoward incident. Citizens have been protesting the government’s mishandling of the economy. Demonstrations have been peaceful, barring a few at the start where protesters were dispersed by the police. Sri Lankans from all walks of life came together peacefully and demanded that the government step down. The entire cabinet resigned. There is a strong sense of unity. Tourists have also joined the protests in some places. Although it may look worrying in the news, there’s no risk whatsoever to tourists,” he said.

Malik has found an untapped opportunity in the unfolding crisis. “This is a very positive development for Sri Lanka. The people have had enough of politicians, and they have been forced to make reforms. A new competent economic team has been appointed; they are negotiating with the International Monetary Fund (IMF) for a bailout package. Initial measures to improve the economic situation have been very well received locally and internationally. Bailout package is expected to address the shortages in the coming months. Tourism is critical to our economic recovery and every section of society is keenly aware of this and are supportive to the cause,” he said.

“As an island rich in diversity of flora and fauna, culture, tradition and people, Sri Lanka offers tourists a unique opportunity to discover and experience ethical tourism in a variety of ways. From the Portuguese to the Dutch, the British and the Arabs and all other communities and people of the world have been coming to Sri Lanka over the past few centuries. No wonder, ours is an island filled with history, heritage, cultural integration, and soul. We’ve always had a close connection with nature and the environment. Traditional architecture, tropical modernism, being respectful towards biodiversity and looking for sustainable and regenerative means of conservation are our concerted efforts towards ethical tourism. Our tourism numbers are relatively small, and we never oversell our destinations like many other nations,” he said.

Sri Lanka, as a developing country, has remained committed towards sustainability.

Malik said: “We’ve not suffered the mass development of concrete jungles of massive hotels that have destroyed the environment. Most of our hotels are small boutique properties, many owner-managed, offering a genuine connection to the country and its people. We’ve a close link with nature and our environment, which, in turn, has allowed us to value, respect and work towards protecting and preserving our natural resources. From assessing our plastic footprint to being mindful of climate change and action, minimising food waste wherever possible to initiatives focused on positive social impacts, the tourism industry is attempting to push the sustainability envelope.”

Malik likes to describe himself as an “accidental hotelier”.

“When I returned to Sri Lanka after my degree in entrepreneurship at Babson College, Boston, I expected that I’d spend the rest of my life growing and selling our single-origin Dilmah Tea, together with my brother and father. I fell in love with the beautiful Ceylon tea country in the cool Central Highlands at an elevation of almost 4,800ft. The historic tea planters’ bungalows I thought would make ideal boutique hotels for travellers who wanted a truly unique experience at the world’s first tea bungalow resort. That is how Ceylon Tea Trails came into being and I became an accidental hotelier. I’m happy that I was able to showcase a different kind of tourism — slow travel, living the life of a 1920s tea planter,” he said.

That was the big idea behind Resplendent Ceylon. “A few years after Ceylon Tea Trails welcomed its first guest in 2005, I started receiving letters from guests saying what a wonderful time they had and that everywhere they went thereafter fell short in comparison! This led me to think that our kind of boutique hospitality in unique environments would be in demand. So, we started developing our circuit around Sri Lanka and named the collection Resplendent Ceylon. We wanted to offer the curious traveller a range of experiences linked to our island’s history, culture and nature,” he added.

Industry experts have praised Dilmah Tea for capturing the global imagination at the expense of the India tea industry, which is over 175 years’ old.

“Ceylon Tea is special because in a small area, we grow a wide range of teas using artisanal methods unchanged for 150 years. Our teas are famed for their flavour. My father, Merrill J Fernando, had a dream to take Ceylon Tea, packed at origin, to the world. He launched Dilmah in 1988 when he was 58 years old. His passion and dedication, together with wonderful consumer acceptance, are what have made Dilmah a global tea brand. We’re also proud of our association with Emirates, which has been exclusively serving Dilmah since 1992,” he said.

Ceylon Tea Trails is made up of five colonial-era tea planters’ bungalows, scattered around Castlereagh Lake.

The properties are perched at an altitude of 4,800ft in the Central Highlands of the island nation. They have period furnishings, gracious butler service, gourmet cuisine, and the non-hotel ambience has made Ceylon Tea Trails the gold standard for luxury in Sri Lanka. Guests can trek and bike between the five bungalows on marked trails.

Cottage-cosy Summerville (1923) is the quietest, perched above the lake with uninterrupted views of the water and verdant hills. Glamourpuss Castlereagh (1925) is set right on the lake’s edge with extensive gardens, two summerhouses and fabulous views. Closest to the Norwood tea factory, Norwood (1890; rebuilt 1940) feels more modern, with sensational valley vistas. Classic Tientsin (1888) enjoys the highest altitude (4,600ft) and the best pool.