Tea Was Once So Valuable It Was Kept in Locking Caddies 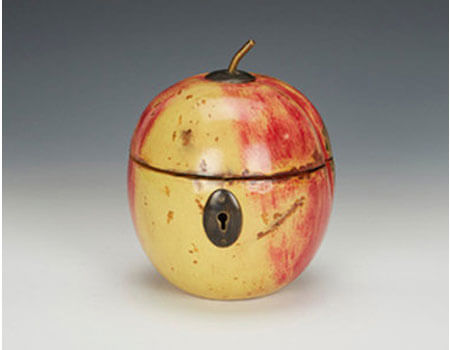 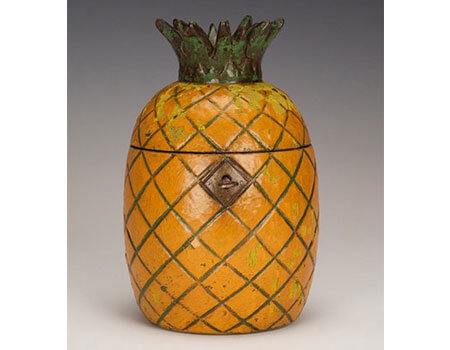 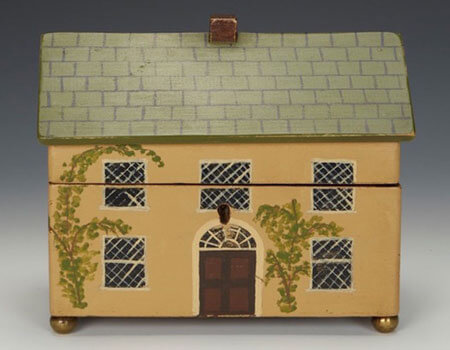 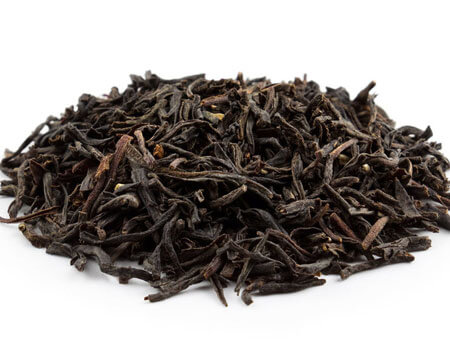 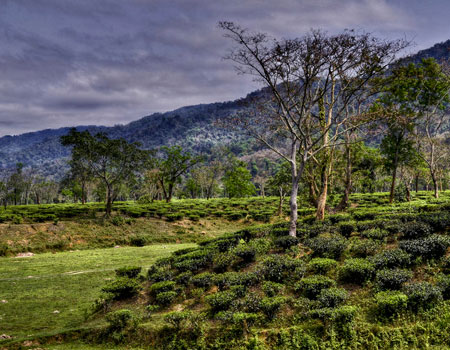 At least until the British Empire turned its attention to India.

CARVED OF FRUITWOOD, LINED WITH lead, and shaped like a peach, the fist-sized box is endearingly painted just like a fruit: yellow with streaks of red on top, and a few brown dimples that resemble bruises. A painted leaf curls against one side, and its lid is topped with a stem that can be used to open it. Something distinctly less-fruit-like is the metal lock mounted front and center.

The box is one of the more than 450 containers known as tea caddies in Mark Bramble’s personal collection, 25 of which feature locks. Bramble took over this collection from his mother in the 1980s. A Broadway writer and director, he makes detours to antique dealers when traveling for productions around the world to add to his collection. While his mother preferred porcelain caddies, Bramble is drawn to wood and papier mache versions, some of which feature locks designed to safeguard precious tea from sticky fingers. Vessels like these once appeared in upper-class English homes, and their use provides insight into the global dealings of the British Empire.

When Camellia sinensis leaves were first introduced to England from China in the 17th century, they were prohibitively expensive. In the 1690s, the Countess of Argyll paid over £10 for just six ounces of tea, at a time when her estate lawyer’s annual income was a mere £20. Some wealthy families paid a portion of their servants’ wages in tea, or provided them with a modest tea allowance (a practice criticized by some, who thought the lower classes should content themselves with beer and ale).

For many in the monied classes, being waited on hand and foot also meant living with the fear of thievery—be it of the family silver or the coveted tea leaves. There was even concern that leftover tea leaves would be dried and sold as new. “You have also heard, that your maids sometimes dry your leaves and sell them,” read a letter in the May 1794 issue of Anthologia Hibernica. “Your industrious nymph, bent on gain, may get a shilling a pound for such tea.” Hence the practice of keeping the family’s tea safe in caddies fitted with locks and keys, or in secured in wooden chests where caddies were stored in pairs (one for green tea and one for black).

Although the caddies were representative of class divisions in English society, some, such as the peach, were not without their charm.

“I also have a wooden box that’s in the form of a cottage from the Regency period—the early 19th century,” Bramble says. “And it’s charming. It’s naively painted, you can feel the warmth of the creator.”

The high cost of tea was enabled by the notorious British East India Company, which monopolized trade with China, leading to a thriving black market for tea (that included counterfeits, such as sloe leaves dyed with sheep dung). By the 1780s, the smuggled tea trade had surpassed legal distribution.

“Andrews the smuggler brought me this night, about 11 o’clock, a bag of Hyson tea … he frightened us a little, by whistling under the parlour window, just as we were going to bed,” clergyman James Woodforde write in his diary in 1777.

Most tea was of pretty poor quality—weak, overboiled, and mixed with who-knows-what. Pure, high-quality tea remained a luxury, and elaborate rituals and an armada of specialized instruments were developed for storing, brewing, and serving it, from detailed tea caddies to silver sugar tongs to elaborate hot water urns.

The status of tea, and the need for locking tea caddies, began to shift in 1833, when the East India Company lost its trade monopoly in China. As the Company resorted to drug smuggling and military tactics (i.e., the Opium Wars) to safeguard profits, trade didn’t improve. Instead, it became increasingly expensive and politically untenable. So the British looked to their other imperial holdings.

“What really drove the British to look towards India was a desire to expand their trading empire, and to turn a profit in an area that was a money-losing operation at the time,” says economic historian Andrew Liu, author of a forthcoming book comparing tea trade and production in 19th-century China and India.

British officials granted settlers swathes of land in Assam, in northeast India, in the hope that they would cultivate it. Migrants and indentured servants were brought in to work the land. Charles Bruce, who had fought with the East India Company against the Burmese to acquire Assam, was made superintendent of the burgeoning tea plantations. The industry soon thrived in Assam’s wet climate and rich soil, and even today it is the top tea-producing region in the world.

By the end of the 19th century, tea cultivation was firmly rooted in India and Sri Lanka, both British colonies. By 1901, over six pounds of tea were imported to England for each person—over three times the consumption of fifty years before. Tea became the hallmark of British culture we know today, available to everyone—and locking tea caddies entered the world of collectibles.