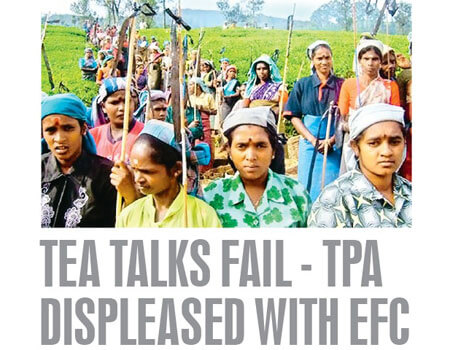 Yesterday’s (7), talks between the Government and Regional Plantation Companies on the basic wage demand of Rs 1,000 and beyond for plantation workers were deadlocked.

The discussion held at Prime Minister Ranil Wickremesinghe’s Office, was joined by the Tamil Progressive Alliance (TPA), who watched over the developments of the meeting.

The Rs 1,000 per day basic wage demand failed when the collective agreement was signed in January for Rs 700, following which the TPA expressed its displeasure over the agreement deal that failed to reach a satisfactory pay for plantation workers.

The second round of talks was held last week, however, it was yesterday that they intended to resolve the issue, yet that too ended up with no positive results.

Minister of Plantations Navin Dissanayake earlier, observed that Rs 950 as a basic could be reached, however, the collective agreement could only agree to a Rs 700 payment per day. The TPA questioned as to what happened to the balance Rs 250 that could be added to the payroll as mentioned by the Minister.

To this question, the Government could not give a favourable response, noted Nuwara Eliya United National Party Parliamentarian M. Thilakaraj.

It was revealed that the Employers’ Federation of Ceylon (EFC) in strong terms said that they cannot go beyond Rs 700 as the basic for the workers. Hence, the matter has to be responsibly dealt with by the Government and discussions held continuously with the TPA in this regard, noted Thilakaraj.

The TPA was represented by Minister V. Radhakrishnan, MPs Aravindkumar and Thilakaraj, the Premier’s Advisor R. Paskaralingam, Ministers Dissanayake and Ravindra Samaraweera representing the Government and Lalith Obeysekara and others on behalf of the EFC.