Tea Nursery bed operators in the region have since 2015 demanded over sh50b from Government for the seedlings they supplied to various farmers.

Mugasi is in the region to supervise the ongoing verification of the operation of the tea sector. 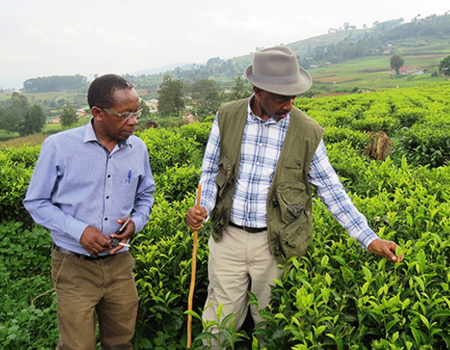 Tea Nursery bed operators in the region have since 2015 demanded over sh50b from Government for the seedlings they supplied to various farmers.

Mugasi, who started his verification visit from Kabale district on Wednesday noted that some farmers had sent in claims that do not reflect the real picture on ground which may attract a penalty to the culprits in the long run.

“Government is going to pay compliant farmers whose claims reflect the real picture as verified by our teams.

"However, I want to warn those who have inflated claims that they risk facing the hard side of the law if they do not want to be honest in this project,” he said.

The verification exercise which started over a week ago, will last a month. It is being conducted by experts from the secretariat who are using GPS equipment to establish the exact pieces of land occupied by tea.

Beda Mwebesa, the Kabale district production officer said that after this verification, authorities intend to boost sensitisation of tea farmers on proper management of tea in order to boost productivity.

Kigezi region had for long existed without any cash crop not until 2008 when Government introduced tea growing there.

Government invested sh20b in the project and it started from Kanungu district before coming to Kabale. Every district was supposed to begin with 22 million seedlings.

Every tea farmer with two acres was supposed to get sh2m from Government.

Kigezi Highland Tea Company was contracted to champion this enterprise in the region.

However, the enterprise has since 2016 been involved in a series of challenges as farmers pulled ropes with Government over unpaid claims.

On August 16, 2016, the state minister for Housing, Dr Chris Baryomunsi and other stakeholders through Kinkiizi tea Nursery operators petitioned the Inspectorate General of Government asking her to investigate the operation of Kigezi Highland tea accusing the company of embezzling over sh1.3 b from farmers.

On September 20, 2016, stakeholders in the tea sector from Kigezi region addressed a press conference at Grand Imperial Hotel in Kampala and revealed that they demanded over sh29b from Government from the 16 million seedlings they had supplied between March 2015 and March 2016.

Later on, various protests from farmers in the region were held as they accused some Government officials over failing the project that had seemed their source of economic hope.

Following the IGG’s investigations, she wrote to the leadership of Kinkiizi Tea Nursery Operators on January 9, 2017 expressing her withdrawal from investigating Kigezi Highland Tea after realising that the petition was based on personal interests.

According to Frank Byaruhanga, the chairperson of tea farmers in South Western Uganda, most farmers are not happy with Government for this delayed payment since it has affected their operation.

Baltazar Kasirivu-Atwooki the State Minister for Economic Monitoring while meeting stakeholders in the sector at Cephas inn Kabale in January this year blamed the NAADS secretariat for not considering the presidential directive of clearing tea farmers which had caused unnecessary delays in the payment of farmers.

On November 22, 2016, the presidential private secretary wrote to the Ministry of Agriculture asking NAADS to ensure that all tea seedlings from nursery beds are bought to enable their timely planting.

Everest Mulumba, the Agro- business Development Officer in NAADS said that the delays were caused by some procedural expectations from the secretariat.