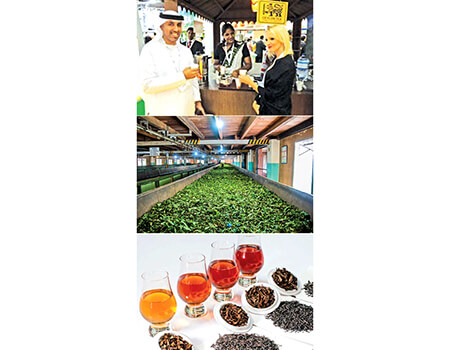 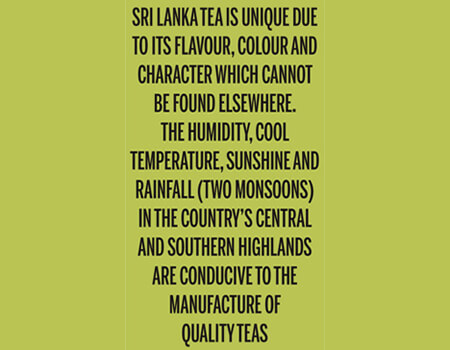 Tea is our pride for the reason that it is the best tea on the globe. It is the duty of every Sri Lankan, especially, the Diplomatic Missions worldwide to defend and promote our tea as much as the beauty of Sri Lanka.

Sri Lanka tea is unique due to its flavour, colour and character which cannot be found elsewhere. The humidity, cool temperature, sunshine and rainfall (two monsoons) in the country’s central and southern highlands are conducive to the manufacture of quality teas.

Tea plantations are scenic and pristine. Tea is grown in handpicked areas and processed in an artisanal process, unchanged over a century. Where else in the world one could find this combination in one Island?

It is unfortunate that the quality and standard of tea is deteriorating due to mismanagement and not modernising the factories and improving techniques on par with international standards when our competitors bypass us. Sri Lanka which has been the main tea exporter to the world, is bypassed by Kenya when India and Russia with higher yields are unable to export more due to local consumption. In 2019, Sri Lanka was the fourth highest tea producer in the world.

It is the duty of the Embassies worldwide to promote our tea, tourism and the image of the country as the representatives of the nation. How many are active as representatives of Sri Lanka in other countries is a million dollar question.

Tea is exported to Russia, Syria, Turkey, Iran, Saudi Arabia, Iraq, UK, Egypt, Libya, Japan and Germany in large quantities amounting to 288 million kilograms. Brand tea is produced in Sri Lanka not only a geographical indication but also has been a pride and symbol of Sri Lanka, culture, heritage, and identity spreading world over via our Embassies and Tea Board outlets.

The Sri Lanka Tea Board Logo and Ceylon tea has a niche market occupying 10 percent of the global market in which 50 percent is sent as bulk. It is sad that the situation is deteriorating due to mismanagement of tea estates and not keeping pace with the international developments and demands with other competitors such as coffee and colas in terms of health, quality and flour.

Ceylon tea is easy to promote as it is genuinely of quality, high standard and meet needs and world standards. We wish to regain the lost status on tea as the leader in the world.

Once tea, rubber and coconut have been the main sources of income on exports which is replaced by many other resources today such as foreign employment, apparels and other exports and many nontraditional resources. Tea has a sad story of almost forcibly acquiring the land belong to upcountry peasants in the guise of developments by the British colonial rulers for few shillings of an acre.

Tea is the most consumed drink of mankind next to water. It is a healthy and natural drink which is consumed as a social drink which bonds families, countries including Sri Lanka (Once Ceylon) which has now lost the position as the main tea exporter to the world. The tea grown area is limited due to the shortage of land. The cost of production has become unbearable mainly due to the shortage and high wages of labour and maintenance.

Estate owners do not invest on replanting and new plantations due to excessive expenditure and the length of time for a return, though once the tea is properly grown the benefit will extend to few decades. But in an era citizens are looking for quick and large margins on profits, traditional investors on cultivation are rare.

It is time local investors and tea estate owners are encouraged for replantation and/or use tea estates for tea tourism for which the environment is ideal due to landscape and beauty in addition to the availability. Tourists, especially those from the Middle East and the West are full of praise and love for tea estates for beauty, calm environment and greenery coupled with sceneries. It is time the tourist board and the tea board with Sri Lankan Embassies worldwide engage in an exploratory expedition on this area to benefit the tourist industry as well as the tea industry.

It is a sorry affair that people have got used to unhealthy fast food and beverages with strong chemicals and poisonous materials. However, the concerns are raised and advice given to discourage unhealthy breweries and encourage healthy and natural drinks. Billions spend on advertisements and attractions have overtaken the campaigners for natural drinks which are healthy, cheap and readily available. In Sri Lanka, coffee with lot of sugar is available in parties and offices increasing diabetic population when tea is available in every corner.

Tea is marketed and popular in Russia. The most important foreign markets for Sri Lankan tea are the former Soviet bloc countries of the CIS, The United Arab Emirates, Russia, Syria, Turkey, Iran, the United Kingdom, Egypt, Libya and Japan. The political situation in some countries has a direct effect on Ceylon Tea. It is time for us to look for alternatives until the situation in the Middle East settles. The Arab world and the West consider tea as a healthy, smooth, traditional social drink.

Consumption patterns have changed due to fast life by adopting quicker methods such as tea bags instead of traditional pot of tea, or naturally made tea traditionally for quiet and smooth enjoyment. Still tea is synonymous with Ceylon with the brand and the trade mark for pure, original and quality tea. Awareness and demand for Ceylon Tea among consumers in the Gulf Market are high. Loose tea consumption has dominated over consumption of tea bags.

Consumers are gradually weaned away from loose quality tea due to aggressive media campaigns and fast life of consumers. Multi-national brands increase their market share through heavy media/promotional campaigns and sophisticated packaging, despite using inferior “multi origin teas”. The brand becomes more significant than the origin. This trend is seen in former Ceylon strongholds such as Russia and former Soviet Republics.

It is time we look for new avenues to sell tea with least effort as it is not difficult to find markets for quality consumer items with a worldwide love and reputation. Positioned in the heart of the old world, the UAE, UK and Russia are the ideal access points to the three vital transit points especially between the East and the West. Dubai is the business hub in the Middle East. The UAE is the shining jewel on trade and tourism with 7.9 million visitors in 2010 and the world’s largest shopping mall- the Dubai Mall and the UK is the centre of the business world.

With the world’s tallest building, one of the top destination cities in the world, world’s largest man made harbour and world’s largest manmade Island, the UAE is the best and most friendly and accessible destination to promote our tea. It is a platform to all other destinations including the West. Dubai is a business HUB for tea trade as well. Our pride is devaluated and the trade mark is exploited by our competitors in tea trade.

An aggressive and consorted effort is urgently needed to counter the situation. The UK is the other main centre of our tea.

Tea is our pride. Tea can be promoted with the beauty of Sri Lanka and the quality of tea as a unique brand by itself with many challenges ahead with the traditional and nont raditional competitors. The Tea Board in Sri Lanka and the Sri Lankan Embassies worldwide have a pivotal role to play with their resources and the directions form the head offices. This will be a platform and a vehicle to promote all our other traditional and nontraditional items using the modern techniques and new international platforms. Sri Lanka was brave and successful in combatting the Covid-19 threat successfully and promoting our silver may not be a challenge.