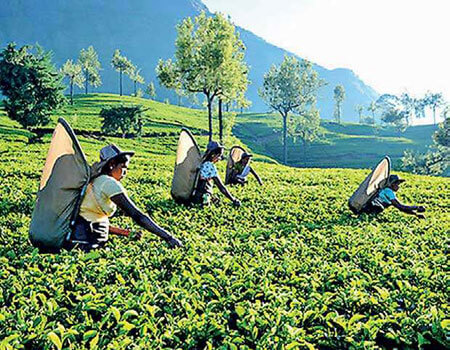 Tea exports fell by 8.6 percent in November while tea production recorded a marginal decline overshadowed by unfavourable weather conditions and production disruptions due to trade union actions in the estates managed by Regional Plantation Companies (RPCs).

According to the Sri Lanka Tea Board (SLTB), tea export volumes dropped by two million kilogrammes (M/kg) to 21 M/kg in November, while tea production fell by a marginal 0.2 M/Kg or 0.8 percent year-on-year (YoY) to 24.7 M/Kg in November.

The tea export income in rupee terms also dropped by Rs.1 billion to Rs.18 billion, despite this year’s sharp devaluation of the rupee against the US dollar.

On a cumulative basis, tea production contracted by 1.8 percent YoY to 277.7 M/Kg during the January-November period.

Accordingly, during the period, tea export volumes fell by 3.01 percent YoY to 257.M/Kg and the export income fell by 1.04 percent to Rs.210 billion.

The SLTB noted that the marginal tea production decline in November was mainly due to a notable decrease in the production of high-grown tea.

Speaking to Mirror Business, Employers’ Federation of Ceylon Plantations Group Chairman Roshan Rajadurai said that excessive rain in the hill country and the disruption to production due to trade union action, led to a decline in the RPCs’ tea output.

He further noted that the RPC tea output in December is likely to record a sharp decline as a result of the strike carried out by plantation workers over a two-week period in early December, demanding to double their basic wage.

However, Rajadurai said that now that the strike has come to an end, the workers have returned to work. He was optimistic that the new collective worker agreement would be signed soon.

Forbes & Walker Tea Brokers earlier this week stated that Sri Lanka’s tea production is likely to be around 300 M/Kg in 2018.

The SLTB also said that the tea output may reach 300 M/Kg by end of this year, as some of the tea stocks not recorded in the current statistics would be included in the revised tea statistics for 2018; they are to be released next year.

Speaking of forecasts for next year, Rajadurai emphasised that normalisation of the Colombo tea auction prices is crucial for planters to meet tea production and exports, as the RPCs in particular are already making losses due to high production costs.

For most varieties of orthodox teas, Forbes & Walker Tea Brokers predicted an upward movement in prices, particularly in the first half of 2019.

Meanwhile, following a three-year ban, the planters have recently received the long-awaited shipments of the popular weedicide, glyphosate.

However, Rajadurai pointed out that many of the planters were forced to abandon a considerable share in their plantations as a result of the rapid growth of weeds, in the absence of a recognised and an effective weedicide in the market, during last three years.

He noted that it might take 10 years to restore the soil back to original condition, at a considerable financial expense.