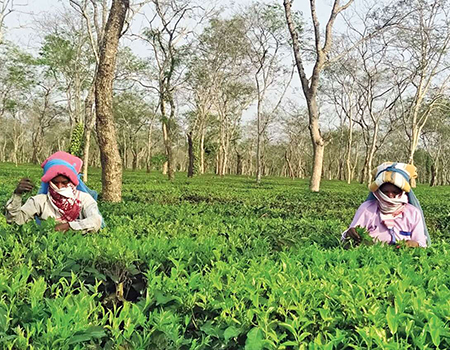 The rule eventually leads to decrease in spread, morbidity and mortality because of the disease

The social distancing advisory of one metre to prevent the spread of coronavirus does not make any impact in tea gardens.

According to the Union ministry of health and family welfare, social distancing is a non-pharmaceutical infection prevention and control intervention implemented to avoid/decrease contact between those who are infected with a disease-causing pathogen and those who are not, so as to stop or slow down the rate and extent of disease transmission in a community. This eventually leads to decrease in spread, morbidity and mortality because of the disease.

“As far as plucking is concerned, there is no problem. Nowadays, all tea plantations in Assam are single hedge plantation and, therefore, the gap between workers is minimum one metre. Plucking season has just started in Assam and a majority of workers are engaged in the activity,” Bidyananda Barkakoty, adviser, North Eastern Tea Association, told The Telegraph.

During plucking, a plucker walks in gallies (sectional roads) and plucks tea leaves from the bushes around her. “The distance between each gali is around one metre. In normal operations also, this rule is followed. What is important here in the current scenario is that they should not huddle together while returning for weighing or going home,” a tea planter said.

“We have to maintain social distancing during disbursement of wages, carrying awareness programmes and in the out-patient departments of garden hospitals,” Barkakoty said, adding that the tea industry which employs a large work force, needs to very careful. The weekly markets, which are places of large gathering, also needs to be monitored.

The Assam labour department has already given directives to the tea industry on dealing with the coronavirus.

Awareness needs to be created in labour line, any suspected case should be reported by the line chowkidar and health assistant, and awareness banners needs to be circulated in the weekly market.

“People coming from outside state or with recent history of travel should be reported,” another directive said.

The labour department has asked the tea industry to keep a watch on garden youths working outside the state, mainly in south India, are who are now returning to their homes in the tea gardens.

“The management and workers need to keep a strict vigil for persons coming outside the state and immediately report the arrival of such persons to the health department for screening,” it said.