Tea pluckers hold back on more work for Rs 1,000 deal 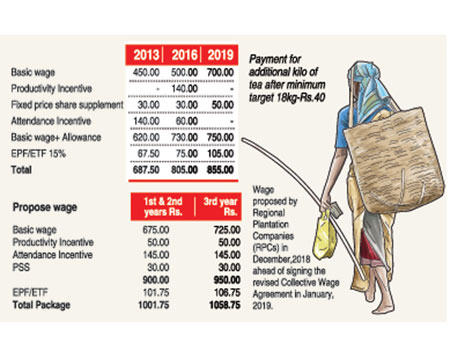 With only a week left for the government ultimatum to the Regional Plantation Companies (RPCs) to grant the agreed Rs 1,000 wage from March 1, trade unions and plantation companies are facing a deadlock themselves to wrap up negotiations.

Worker unions say they are concerned about the new proposals from plantation companies.

Last Thursday, it was expected that the pact involving the government, trade unions and RPCs would be signed at the Presidential Secretariat.

“The government arbitrarily went ahead and announced the Rs 1,000 pay increase for workers without consulting us first. Considering the current productivity strength and fluctuating prices of tea in the world market, we certainly cannot afford to pay this increase to the workers. However, the government requested us to come up with proposals to reach a win-win situation,” a managing director of a company represented by RPCs told the Sunday Times on condition of anonymity.

Plantation unions are concerned that the wage increase would come with strings attached where workers will have to pluck more tea and would be subjected to more mandatory working hours in addition to the new productivity-linked model.

Plantation workers in Hatton said plucking 20 kilos of tea per day has become difficult as it depends on the cultivation and geographical area compared with high quality tea produced in Nuwara Eliya.

Anusha Sivarajah, general secretary of the CWC, told the Sunday Times that the union hopes that discussions with companies would be finalised soon and the agreement signed after some reservations over worker benefits are resolved.

The CWC is one of the partners in the government alliance. Its leader Arumugan Thondaman is the Minister of Community Empowerment and Estate Infrastructure Development.

This would be the first time where the government has intervened to ensure pay increases of plantation workers and become one of the signatories of the collective wage agreement.

Over the last two decades, plantation trade unions and RPCs, which represent 22 publicly-listed companies sign the collective wage agreement which would be effective for three years.

The Minister of Plantation Industries and Export Agriculture, Ramesh Pathirana, who took part in the government-led negotiations said that the government is trying to reach a consensus with RPCs, while ensuring the welfare and benefits of workers.

A senior official of the Planters’ Association of Ceylon, said negotiations are yet to be finalised as many plantation companies refused to implement the government decision.

The Employers’ Federation of Ceylon, which used to negotiate with trade unions on behalf of plantation companies to revise collective wage agreements, did not play a role in the recent government-led discussions.

When the collective wage agreement was signed last year, two of the three unions of the trade union joint committee – the Ceylon Workers’ Congress (CWC) and Lanka Jathika Estate Workers’ Union (LJEWU) – agreed to a basic wage increase of Rs 700 from the Rs 500 proposed by plantation companies. The third trade union group, the Joint Plantation Trade Union Centre (JPTUC), a collective of 10 unions representing thousands of workers in the central hills, refused to sign the collective wage agreement claiming allowances for workers had been curtailed.

It was the CWC which demanded Rs 1,000 a day for plantation workers three years ago.

Lanka Jathika Estate Workers’ Union (LJEWU), one of the two signatories to the collective agreement, is yet to receive the new proposals presented by the plantation companies. The ongoing negotiations between the unions and plantation companies are led by Secretary to the President, P.B. Jayasundera.

While welcoming the government intervention to ensure higher wages, Vadivel Suresh, general secretary of LJEWU, said the union cannot give up the rights of plantation workers by agreeing to harsh conditions of maximum productivity, or mandatory working hours.

The government intervention as the collective wage agreement is effective till next year, also raised concerns among trade unions whether this sudden move was politically motivated targeting upcoming parliamentary polls to secure plantation worker votes.

Nuwara Eliya district Parliamentarian, Mylvaganam Thilakarajah, who represents the National Union of Workers (NUW) moved an adjournment motion early this month following the government announcement to raise the issue of no subtle increase in the basic wage, but in other nominal allowances, while submitting relevant documents of past collective wage agreements.

One of those documents submitted to the Parliament by the MP is a letter sent by Employers Federation of Ceylon (EFC) to the president of CWC in December, 2018 ahead of the signing of the collective agreement in January, 2019.

The letter addressed to Arumugam Thondamon of CWC by W.M.K.L. Weerasinghe, director general of EFC, on behalf of 22 plantation companies, indicated that companies proposed to pay Rs 1,000 as daily wage in the first two years and Rs 1,057.50 for the final year with amendments to the agreements. However, CWC and LJEW went ahead and signed the collective agreement in January last year at a lower basic wage of Rs 700.

“Those trade unions decided not to accept the proposal of increasing the wage to Rs 1,000 for purely political motives. Even though it was not a increase in the basic wage, those unions could have agreed to ensure workers are paid a decent salary considering the cost of living, but they failed them miserably,” parliamentarian Thilakarajah, said alleging those trade unions want to keep the plantation workers isolated from the national stream for petty political reasons.

He also questioned on what basis the collective wage agreement between trade unions and RPCs which has existed over 20 years can be violated through government intervention.

“How can they simply violate the wage agreement, which is still effective, and enter into a new one?” he asked.

Stressing that empowering plantation workers as smallholders by granting them land, similar to what the government had done in the south in the past, would sustain the industry in the long run, Mr Thilakarajah noted that this would enable the community to stand on their own, but the companies prefer to keep them under their clutches.

For the plantation workers in the central hills, the government announcement of Rs 1,000 from March onwards came as a Thaipongal bonanza, but it did not last long. Many of them are skeptical about its implementation.

M. Mathivathani, a mother of four at Binoya Lower Division estate of Rozella in Hatton told the Sunday Times, her wages are inadequate.

She is required to pluck 25 kilos of tea every day to meet the Rs 750 per day wage target.

“We were assured of a Rs 1,000 wage increase many times, but it never happened. Working in estates has become more dangerous for us since plantation management stopped clearing bushes and doing maintenance. We face wasps attacks and dangers from wild animals,” she said.

Balakrishnan Amirthalingam, a youth from the same estate, said “a political drama” is being staged by political parties and trade unions ahead of polls.

“We used to say, Thai Piranthaal Vazi Pirakkum’, new path will be born in January, but there is no prosperous new beginning. I would be happy if the Rs 1,000 wage increase became a reality, but they are taking the workers for another ride.”