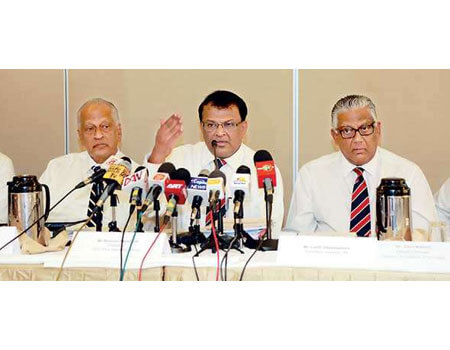 The umbrella organisation of the regional plantation companies (RPCs), the Planters’ Association of Ceylon (PA), yesterday cautioned that this year’s tea output would fall below 300 million kilos while the tea export income would fall below US $ 1.5 billion, due to the ongoing estate workers’ strike launched by trade unions, demanding to double the basic daily wage of estate workers.

Sri Lanka was earlier targeting a tea output of 320 million kilos and over US $ 1.5 billion in export income this year.

Employers’ Federation of Ceylon (EFC) Plantation Services Group Chairman Roshan Rajadurai yesterday told reporters in Colombo that the wage negotiations have turned violent during the last few days as the negotiation team of the RPCs had received open death threats on social media.

He further warned that the RPCs would be forced to vacate the plantations if the managers and staff receive any threats from trade unions and stressed that it’s the government’s responsibility to provide the necessary security to the management and staff in plantations.

“If there are any threats to our managers or staff, we will vacate the estates. The people must understand that we are protecting a national industry; it’s not our private industry.

It’s the responsibility of the government and law enforcement authorities to provide the right environment for our managers, staff and workers who are willing to work in the plantations,” Rajadurai stressed.

He said that 30-40 percent of estate workers attended work until two to three days ago, despite the strike called by the trade unions. However, he noted that as these workers were being intimidated and threatened by politically-motivated trade unions, they have stopped coming to work.

Rajadurai asserted that the PA had offered an attractive productivity-based wage model with a total daily wage of Rs.940 per day for workers, in which the workers can easily earn up to Rs.1,055 per day by plucking 22 kilos of tea.

However, he lamented that the trade unions rejected the proposal demanding to increase the basic daily wage up to Rs.1000 per day by continuing with the 150-year-old attendance-based wage model.

“What we are saying is that don’t mix politics with economics. A problem has been triggered because politics was mixed with economics. Let the professional managers run the industry and politicians can continue with politics,” he urged.

Rajadurai stressed that the RPCs would not let the politicians bully the management and he called that time has come to put an end to “this nonsense”.

He noted that the Colombo tea auction prices have suffered due to external developments and due to the loss of a significant market share in Japan due to the glyphosate ban.

He warned that a collapse of the RPCs would adversely impact the Ceylon Tea brand, impacting the smallholders who contribute to 75 percent of the total tea output.

Rajadurai said that the auction price of tea has declined by 6 percent year-on-year to Rs.570 a kilo and it declines Rs.10-20 weekly.

“We had already lost our relative position in the market. Just because Ceylon Tea is not there, people are not going to give up on tea; they are going to source tea from India, Indonesia, etc. It has already happened to our share in the Japanese market—India is filling the gap.

Once they go to a new supplier, they will never come back to us. So we are losing the market and it will impact the very same workers. If the whole RPC system collapses, our Ceylon Tea brand will suffer and it will impact 1.5 million people in the smallholder industry,” he pointed out.

Rajadurai dismissed the notion that giving back the management of RPCs to the state would make them efficient.

He pointed out that prior to 1992, the state-run plantations were heavily subsidised at a sum of Rs.5 billion per month while running at massive losses and the plantation sector under the state sector had lost more workers than under the RPCs.

Further, he said that currently the 20 plantations under state management are spending Rs.2.6 in subsidies while running at losses.

Sri Lanka’s tea plucking average remains the lowest among tea-producing countries at 18 kilos per workers while the cost of production remains the highest at Rs.40.56 per a kilo of green leaf.

The PA stated that the losses in tea production have expanded from Rs.96.31 per kilo this year, compared to a loss of Rs.70.94 per kilo last year.

If the RPCs agreed to the wage increase demanded by the unions, they will have to incur Rs.43 billion in gratuities and wages per year.

The ongoing strike by estate trade unions costs Rs.1.25 billion per week for the Sri Lankan economy, the Planters’ Association of Ceylon estimates.

The plantation workers in the RPCs on December 4 launched an indefinite strike demanding to double the basic daily wage of workers to Rs.1,000, sticking to the 150-year-old attendance-based daily wage model.

EFC Plantation Services Group Chairman Roshan Rajadurai yesterday said that the RPCs are losing Rs.250 million in revenue per day as the activities in the RPCs have come to a complete standstill as most of the workers fear to come to work over the intimidation tactics of trade unions.

He noted that if the current workers’ strike continues, the revenue losses would reach Rs.6.25 billion by the beginning of next January.

Rajadurai stated that due to the short-sighted actions of trade unions, the workers are also suffering as they are not getting paid, particularly during this holiday season, ahead of the new year.