Drinking three or more cups of tea a day is as good for you as drinking plenty of water and may even have extra health benefits, say researchers. 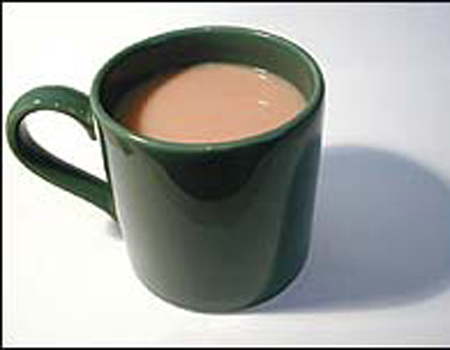 The work in the European Journal of Clinical Nutrition dispels the common belief that tea dehydrates.

Tea not only rehydrates as well as water does, but it can also protect against heart disease and some cancers, UK nutritionists found.

Experts believe flavonoids are the key ingredient in tea that promote health.

These polyphenol antioxidants are found in many foods and plants, including tea leaves, and have been shown to help prevent cell damage.

They found clear evidence that drinking three to four cups of tea a day can cut the chances of having a heart attack.

Some studies suggested tea consumption protected against cancer, although this effect was less clear-cut.

Dr Ruxton said: "Drinking tea is actually better for you than drinking water. Water is essentially replacing fluid. Tea replaces fluids and contains antioxidants so it's got two things going for it."

She said it was an urban myth that tea is dehydrating.

"Studies on caffeine have found very high doses dehydrate and everyone assumes that caffeine-containing beverages dehydrate. But even if you had a really, really strong cup of tea or coffee, which is quite hard to make, you would still have a net gain of fluid.

"Also, a cup of tea contains fluoride, which is good for the teeth," she added.

There was no evidence that tea consumption was harmful to health. However, research suggests that tea can impair the body's ability to absorb iron from food, meaning people at risk of anaemia should avoid drinking tea around mealtimes.

"Tea is not dehydrating. It is a healthy drink" Claire Williamson of the British Nutrition Foundation

She said the increasing popularity of soft drinks meant many people were not drinking as much tea as before.

"Tea drinking is most common in older people, the 40 plus age range. In older people, tea sometimes made up about 70% of fluid intake so it is a really important contributor," she said.

"The evidence in humans is not as strong and more studies need to be done. But there are definite potential health benefits from the polyphenols in terms of reducing the risk of diseases such as heart disease and cancers.

"In terms of fluid intake, we recommend 1.5-2 litres per day and that can include tea. Tea is not dehydrating. It is a healthy drink."

The Tea Council provided funding for the work. Dr Ruxton stressed that the work was independent.