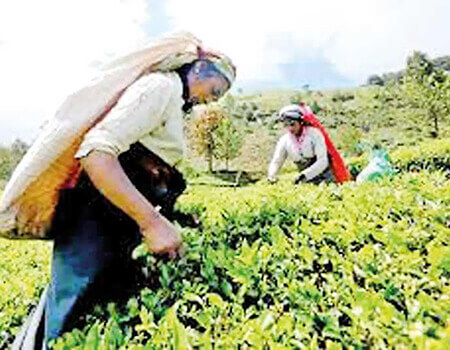 The Rs.1,000 daily minimum wage recently approved for plantation workers by two industry wages boards is set to face major obstacle over the next couple of weeks, as the move could also impact wages in the tea smallholder sector and privately-owned tea factories, which account for at least 75 percent of the country’s tea production.

The proposal to increase the daily minimum wage of plantation workers up to Rs.1,000 was passed by the wages control boards for Tea Growing & Manufacturing Trade and Rubber Cultivation & Raw Rubber Processing Trade, with 11 voting for and eight voting against.

However, the measure was passed amid objections from representatives of the Employers’ Federation of Ceylon (EFC), Sri Lanka Tea Factory Owners Association (SLTFOA) and Regional Plantation Companies (RPCs). The tea smallholder sector doesn’t have a direct representation in the wages board of Tea Growing & Manufacturing Trade.

“All this time, RPCs were put in a box and hammered by everyone. The Tea Growing and Manufacturing Trade wages control board includes 440,000 tea smallholders and additional 500 tea factory owners, who contribute to 75 percent of national tea production, apart from us (RPCs),” Planters’ Association of Ceylon former Chairman and Hayleys Plantations Managing Director Dr. Roshan Rajadurai told Mirror Business.

After the proposal was passed at the two wages boards, Labour Minister Nimal Siripala de Silva announced that the decision would be gazetted within one week.

However, Dr. Rajadurai pointed out that it would take weeks to issue the relevant gazette notification as per current protocols.

“The Minister will first have to announce the decision on newspapers, while allowing a two-week period to raise objections. Then the Minister will have to consider the objections in the current context, and then would have to call wages boards for sessions and then only he is able to publish the gazette to make it the law,” he elaborated.

He noted that RPCs have offered a win-win proposal for workers and for the sustainability of their companies, based on productivity, However, he lamented that the plantation sector trade union insisted on resolving the problem at the wages boards, knowing that they have the State backing on these boards.

The latest proposal offered a fixed daily wage of Rs.1,105, with the reintroduction of attendance and productivity incentives.

Meanwhile, SLTFOA immediate past President Hairth Ranasinghe said that tea factory owners would raise objections to the proposal to increase the minimum daily wage of the workers, in particular as it would jeopardize the sector’s productivity. “This will remove incentives for people to regularly come to work, that’s our biggest issue. Therefore, our productivity would definitely go down through these kinds of decisions. If factories were to pay Rs.1, 000, then, the smallholders would also have to pay Rs.1, 000. This affects everyone down the line,” he told Mirror Business.

According to industry sources, 85 percent of pluckers in tea smallholder sector are considered to be hired labour.

Ranasinghe also noted that factory owners are not in a position to afford the wage hike, while pointing out that it’s unfair when outside parties decide on the wages while their revenue mostly depend on auction prices.

He further expects tea smallholders, who are operating on a productivity-based wage model, to raise objections to the wage hike. “The productivity of smallholders has also come down compared to 6-7 years ago, so their income is also less than what it was. Therefore, I don’t think they would be able to afford to pay this wage hike.

They pay around Rs.700-800 per day, and some operators are paying Rs.1000 or so, which is based on productivity. Its currently a win-win situation, but this wage hike would lead to a situation where only one party becomes the winner,” he stressed. He noted that SLTFOA doesn’t object the 10-20 percent increase in the basic wage, however, he stressed that any increase beyond that must be based on productivity.

Meanwhile, RPCs are estimated to incur Rs.15 billion as additional costs due to the wage increase.