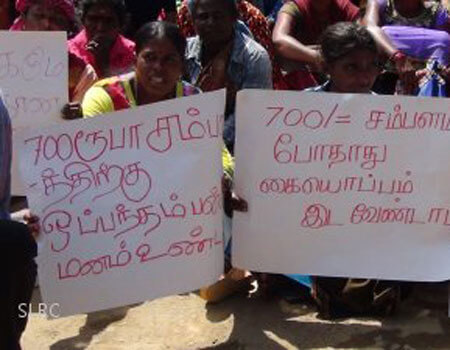 Jan 27, Colombo: Estate workers of Hatton and Bogawanthalawa tea estates have again launched a strike today (27) demanding the plantation companies to increase their basic daily wage up to Rs. 1000.

A group of estate workers is engaged in a protest from this morning blocking the bridge on Hatton-Bogawanthalawa main road in Bogawanthalawa town.

Due to the blocking of main roads, no vehicles traveling to Bogawanthalawa from Hatton can enter the city.

The estate workers have commenced the agitation to protest the agreement reached by the Estate Employer's federation and the estate workers' union with the intervention of the government to raise the basic daily wage up to Rs. 700.

The workers say the Rs. 700 daily wage is not enough and also the Rs. 140 incentive allowance given earlier is not included in the new agreement.

The workers say the politicians promised to get their wages raised up to Rs. 1000 per day and they have been cheated with basic wage of Rs. 700.

The protesting plantation workers are asking the workers' unions not to sign the agreement due to be signed by the two sides over the daily wage increase.