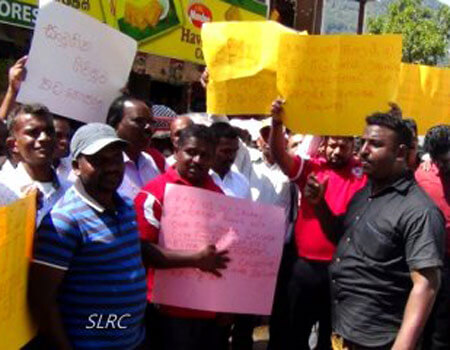 Nov 26, Colombo: Staff of eight tea estates in Maskeliya staged a protest today (26) at the Mousakelle junction demanding the revision of their salaries.

The members of the Ceylon Estate Staff Union have boycotted the monthly salary paid to them by the estate authorities yesterday.

In terms of this agreement, the regional plantation companies have agreed to increase the salaries of estate staff covered under the agreement by 25 percent. This revision will be granted with immediate effect and will be applicable for a minimum period of three years.

According to the collective agreement, 18 plantation companies have increased the new salary and added it to the base salary.

The staff of eight plantations companies have launched the protest against the decision of the Maskeliya Plantation Company demanding the company to add the pay raise to the base salary as the other 18 companies.

They say they will not take the monthly salary and will continue to strike until the new salary is obtained.