Tea Board Expects Improved Prospects For Ceylon Tea Next Year 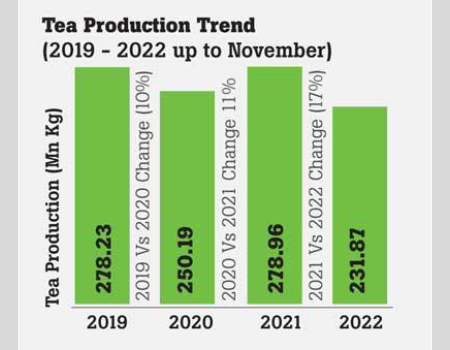 Come 2023, Sri Lanka hopes to brew a strong Ceylon Tea cuppa, as the corrective actions taken by the authorities and industry in recent months are expected to help pull the struggling industry back on track.

The Sri Lanka Tea Board (SLTB) yesterday shared that positive outcomes would be witnessed in the coming months and the industry as a whole would be uplifted to fetch higher earnings.

“With the government’s decision to allow a more generous policy on fertiliser, all expectations are that the country’s tea production in 2023 would improve to at least 290 MnKgs.

It is believed that the initiative relaunched jointly by the SLTB and Tea Small Holdings Development Authority, titled B-60 or ‘Sahakampanaya’, in September this year, would contribute favourably towards achieving a higher crop,” the SLTB said in a statement. For the year 2022, the SLTB expects the tea export volume to reach 250 MnKgs and the total income from tea exports to touch US $ 1.2 billion.

The year 2022, which kicked off with a lot of optimism, went on to crumble as time progressed, due to the short-sighted policies implemented by the authorities, including the ban on chemical fertilisers.

As a result, for the first 11 months of the year, the tea output dropped by 17 percent when compared with the corresponding period of the previous year and the expected output of 252 MnKgs for the entire year will be one of the lowest to be recorded in history.

Production from both smallholders and regional plantation companies declined significantly and the latter showed the greatest drop (20 percent). The production shortfall in the smallholder sector was 16 percent.

However, owing to the marked decline in supply caused by the production shortfall, coupled with the sharp depreciation of the Sri Lankan rupee against the US dollar, the tea auction prices registered a steep increase, moving up to an average of US $ 3.80 per kg by end-November 2022, from US $ 3.10 per kg at the beginning of the year.

The SLTB attributed the lower export earnings to low production in the year under review. Meanwhile, the SLTB said the market diversification initiatives taken by the industry stakeholders, both in the public and private sectors, contributed to the opening up of more export markets.