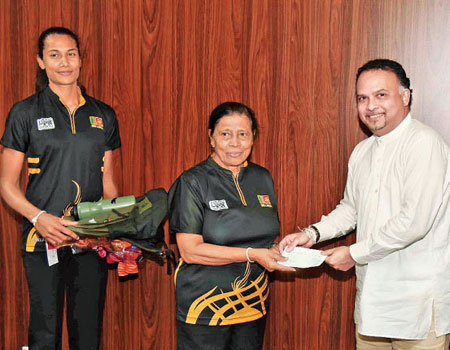 Team work is the key to Sri Lanka Youth Netball team success at the Netball World Cup which would bring honour and fame to the country, said Minister of Plantation Industries Naveen Dissanayake on the occasion of the handing over of the sponsorship cheque to Rs. two million by the Sri Lanka Tea Board before the departure of the team for the event which will be held in Liverpool, England from July 12 to 21.

He said six months ago the Tea Board granted Rs. Three million for the National Netball Team who reach great heights by winning the Asian Netball crown. "When I was the Sports Minister, I was able to bring about unity in the national team with the support of netball chief Trixy Nanayakkara which paid rich dividends."

The Sri Lanka Team Board is a profit making organization and they are willing to support netball which can bring medals to the country as they have several talented players who have proved their work. "I am proud to be associated with the sponsorship of the National Team by the Tea Board and will continue to give my maximum support to the team in their future endeavours."