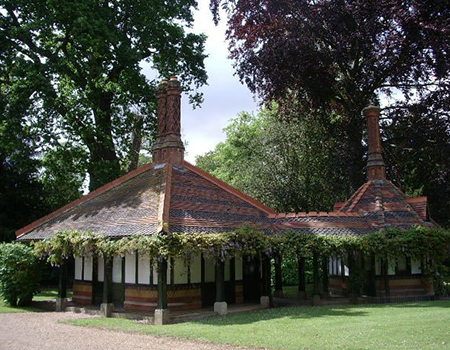 Queen Victoria wrote in 1867 of the peace at Frogmore, in Windsor Great Park, in ‘this dear lovely garden’. By this point, she was six years into the widowhood, which would last until the end of her life. The gardens at Frogmore had a particularly sacred meaning for her, as they were the location of the mausoleums of her mother, the Duchess of Kent and her beloved husband, Albert, the Prince Consort, who both died in the blackest year of the Queen’s life – 1861.

The beauty and peace of the gardens was, therefore, a deeply personal and poignant one. In the south-east of Frogmore gardens, a building was erected which lends touching insight into the Queen’s domesticity. It forms part of that group of smaller, private buildings which were adapted entirely for Victoria’s use and were furnished and decorated outside Prince Albert’s artistic influence. It survives in the grounds at Frogmore – Queen Victoria’s Tea House.

Queen Victoria’s relationship with tea has been sufficiently explored – she introduced it into her garden parties – but this building was built specifically for that purpose. There are over seven-and-a-half thousand references to tea in Queen Victoria’s (edited) journals. We know from the private memoir she wrote down much later in 1872, that drink was ‘only allowed as a great treat’ and that she generally ate her bread and milk out of a ‘small silver basin’. Sadly, by the end of her life, ‘tea’ had become little more than arrowroot and milk. In a strange, full circle, the dying Queen at Osborne was back to her childhood habit of taking sips of milk, a sad fact for one who had faithfully documented ‘taking’ tea wherever she went, be it on a drive in Windsor Great Park, or brewed over a campfire on a Highland excursion from Balmoral by one of her personal attendants. A small tea caddy was presented to Queen Victoria by the Ceylon Tea Agency on 22 December 1892, proudly containing the first sample of tea ever to be grown in England; the original memorandum of the Queen relating to this gift was mounted in a frame in her handwriting.

Frogmore became a favourite place for the Queen for tea. There are numerous references in the Queen’s journals of her taking tea regularly at Frogmore, often outdoors under the trees whilst she worked in a tent near the house, or of breakfasting there. Queen Victoria’s love of the gardens at Frogmore found a later echo in Queen Elizabeth The Queen Mother, who enjoyed taking picnics there, having spent her honeymoon at Frogmore as Duchess of York in 1923.

Queen Victoria wrote down in her memoir: ‘I also remember going to see Aunt Augusta [daughter of George III] at Frogmore where she lived always in the summer’. Princess Augusta had been sketched by Henry Edridge in the gardens at Frogmore in the 1800s. The Frogmore estate passed to Princess Augusta (1768-1840) and thence transferred to the Crown in 1841 when it was purchased together with the near-lying Shaw estate from her executors for £12,000 (ed. Royal Collection Trust, Frogmore House and the Royal Mausoleum, p. 6, Royal Collection Enterprises, 2003).

Princess Augusta’s sister, Princess Elizabeth, future Landgravine of Hesse-Homburg, assisted in the design of the Gothic Ruin at Frogmore, which Queen Victoria later used as another favourite place to breakfast or read. Its walls are decorated in the mock-Tudor style, perhaps recalling Princess Elizabeth’s considerable artistic talents, which can be seen in the Etruscan-style panels she painted in the Cross Gallery at Frogmore House and more importantly, in the luscious flower garlands which festoon the walls of her mother, Queen Charlotte’s Cottage at Kew.

The habit of ‘taking’ tea at Frogmore was maintained by the Queen throughout her life. The young Tsarevich Nicholas of Russia – engaged to the Queen’s beloved granddaughter, Princess Alix of Hesse – paid a visit to his fiancée in the blissful summer of 1894, when after the idyll of several days together at Walton-on-Thames, the couple went to Windsor Castle to stay with Queen Victoria. The Tsarevich’s diary contains many references to breakfast or tea at Frogmore. This occasion took place in the Colonnade at Frogmore, the beautiful loggia designed by James Wyatt overlooking the gardens and lake, which now contains graceful plaster casts of Queen Victoria’s nine children after the marble sculptures by Mary Thornycroft, including a figure of the Queen’s youngest daughter, the baby Princess Beatrice in a nautilus shell in 1858.

It is clear from Queen Victoria’s private sketchbooks that the beauty of the grounds at Frogmore provided not only a peaceful place on which to work on her papers but also a pleasant place in which to paint and sketch. Many watercolours and drawings by her survive, which were made in the gardens at Frogmore. These would suggest that the Queen made them in a tent, as they strongly feature trees, such as the watercolour sketch she annotated ‘In Frogmore Garden’, dated July 1865.

A charming sketch in watercolour at Osborne shows how she combined both tea and art and memorialised them in her hand: ‘From where I took my tea [at] Osborne’ dated August 1869. Another was annotated ‘In Invercauld Tea Oct: [?1] 4. 1879’. She even made a sketch of herself and the royal party taking tea during a sudden snowstorm at Glen Beg in October 1865, three figures beneath umbrellas presumably supposed to depict herself, Princess Louise and Princess Beatrice. A further sketch was annotated by the Queen: ‘Glen Rhinnes [sic] where we took tea on our way to Glen Fiddich. Sept: 24. 1867’. The Queen made more poignant sketches in the gardens at Frogmore, where the widow is holding the pencil as well as the artist: ‘Our Mausoleum’, dated 1865.

Queen Victoria’s brick and tiled Tea House was constructed sometime between 1869 and 1870 and was perhaps designed by the English Gothic revival architect Samuel Sanders Teulon (1812-1873). If it was built by Teulon, it was constructed at the time of a much larger work on which he was then also engaged, the Neo-Gothic brick Church of St Stephen’s in Hampstead, Rosslyn Hill – Teulon’s ‘mighty church’ – whose foundation stone was laid in 1869. Perhaps significantly, Teulon had been responsible for the alterations to St John the Baptist’s Parish Church, Windsor in exactly this period, between 1869 and 1873. The Queen’s Tea House is, however, not directly listed among his known works and the Queen’s journals for 1869-70 do not mention Teulon or the construction of her Tea House.

One pencil and watercolour sketch in the Queen’s hand does survive in the Royal Collection, annotated: ‘[b]egan July 1. finished July 10. 1872’. On 1 July 1872, the Queen went to Frogmore for tea. On 10 July, her journal confirms that she completed her watercolour of the Cottage or Tea House. The sketch shows the Tea House partly visible to the right so that it is possible to work out exactly where the Queen’s tent must have been set up from which she worked. The spot today is close to where she erected a grey and white granite drinking fountain to the memory of her devoted Highland servant, John Brown with a personal dedication: ‘In affectionate remembrance of John Brown, Queen Victoria’s devoted personal attendant and friend, 1883’. John Brown had died on 27 March 1883. This is added in pencil with reference to the Court Circular in the Queen’s journal, where his death was entered instead, at Windsor on 29 March 1883.

The granite fountain was clearly, a memorial to John Brown in the year of his death. A photograph of Queen Victoria in her pony-carriage in the grounds at Frogmore in 1893 shows the Tea House in the background with one of the Queen’s Indian attendants, a Highland servant and two of her Hessian granddaughters, Victoria, Princess Louis of Battenberg and Elisabeth, Grand Duchess Sergei of Russia. The Queen recorded driving down to the Tea House with Princess Victoria and Princess Elisabeth (‘Ella’) and taking tea there in May 1880.

The present author has researched the interior decoration and furnishing of the Tea House, which was nowhere described by the Queen in her (edited) journal and is all the more fascinating, as the Tea House has never been opened to the public. As it was a building constructed solely for the Queen and a private place for tea and leisure, it enables a privileged architectural insight into the Queen’s personality. We know that the Queen referred to it as a Cottage, so this at least allows us to directly link her breakfasting, sitting or writing in the Cottage at Frogmore, with the Tea House.

The wallpaper (still surviving) featured a lattice pattern of painted ivy leaves. There were two large wooden (probably English) mirrors on the wall, one of mahogany. A photograph of a Highland attendant – probably John Brown – hung on another wall. A fireplace was in the main room. A pine table inside was probably used by the Queen on which to write. Several chairs are covered with a design of pink and cream roses with green leaves. There was a bamboo and straw armchair. A set of (possibly English) fruitwood shelves carved with ivy leaves and scrolls, feature four views of German castles – I identify these as all being in Coburg, an appropriate choice given the Queen’s love of the town and its close association with Prince Albert. These I consider to show, the Veste [Fortress] at Coburg, possibly Schloss Reinhardsbrunn in the Thuringian woods [The ducal hunting lodge], Schloss Rosenau [birthplace of Prince Albert] and Schloss Ehrenburg, the town residence of the Coburg Dukes. The carpet in Queen Victoria’s Tea House was woven in Brussels, with black-outlined flowers in green, pink and orange on a background of pale green.

Queen Victoria’s Tea House stands under the trees at Frogmore, then as now, its neo-Gothic appearance rendered more romantic by the wisteria which grows thickly over the tiled roof and connecting loggia. The present-day visitor can now walk through this loggia – which was formerly roped off – allowing a closer study of the building’s beautiful details, including stained-glass panels set in the cornice. This makes possible a closer appreciation of Queen Victoria’s personal architecture. The building is designed in two rooms, its brick chimneys perhaps recalling the Tudor chimneys of Hampton Court Palace, which Queen Victoria had declared public accessible (‘thrown open to all her subjects’) in 1838, the year of her coronation.

During charity open-days at Frogmore, tea is often served in a tent to visiting guests. The present author found it a curiously moving experience to take a cup of English tea and drink it sat in the loggia, making it possible to – once again – have tea at Queen Victoria’s Tea House.

It is fitting to close with a touching detail about the Queen’s tea-taking – her tea-spoons were topped with crowns.