Home>Publications & Articles>Articles>Media Articles>Swapping ONE sugary drink for a cup of tea, coffee or water cuts your risk of type 2 diabetes by up to 10%

Swapping ONE sugary drink for a cup of tea, coffee or water cuts your risk of type 2 diabetes by up to 10% 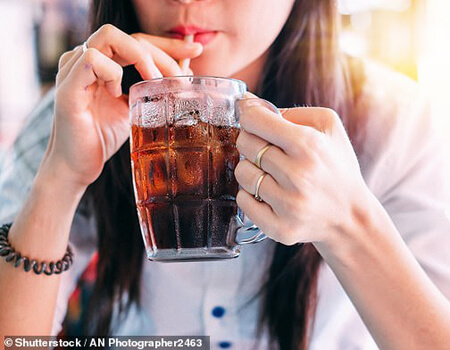 Drinking one fewer sugary drink a day can cut the risk of diabetes by up to 10 percent, according to a new study.

Researchers found that people who increase their consumption of soft drinks, as well as 100 percent fruit juices, were at greater risk of developing type 2 diabetes.

But swapping for diet sodas or artificially sweetened drinks did not lessen the risk, according to the findings published online by the journal Diabetes Care.

The study is the first to look at whether long-term changes in drinking soft drinks are linked with type 2 diabetes risk.

It's an often cited - and repeated - study finding, that drinking soda increases the risk of an early death.

Yet as recently as 2012, nearly half of Americans drank the sweet beverages on a daily basis.

An estimated 30.3 million Americans have type 2 diabetes, and many more are at risk of developing the disease, which shortens life expectancy and may lead to additional chronic health problems later in life.

The study looked at more than 20 years' worth of data from more than 192,000 men and women participating in long-term studies.

Researchers found if participants' sugary drinks decreased, they were a lot healthier.

The study found increasing total sugary drink intake by just four ounces a day over a four-year period was associated with 16 percent higher diabetes risk in the following four years.

If participants replaced one daily sugary drink with water, coffee or tea - and not a diet soda - was linked with two percent to 10 percent lower risk of diabetes.

The study's findings suggest that every soda or deceptively health-seeming fruit juice we drink contributes to cumulative diabetes risks.

That's because as, Study senior author Professor Frank Hu added: 'The study results are in line with current recommendations to replace sugary beverages with noncaloric beverages free of artificial sweeteners.

'Although fruit juices contain some nutrients, their consumption should be moderated.'