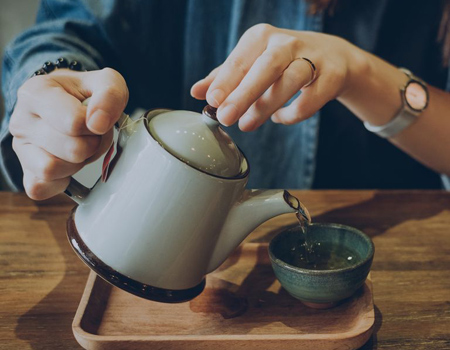 While coffeetends to get all the love—especially among athletes—tea drinkers know their favorite way to caffeinate and warm up packs a ton of health benefits, too. Not only can it help boost your brain function, but according to new research out of China, it can also help protect your heart.

In the study, published in the European Journal of Preventive Cardiology, researchers looked at the data of over 100,000 participants in the China-PAR project—which aimed to predict risk factors of atherosclerotic cardiovascular disease—who had no history of heart attack, stroke, or cancer. The participants were split into two groups: those who drank tea three or more times per week and those who drank tea less than three times per week.

So why is tea so good for your ticker? According to lead study author Xinyan Wang, Ph.D.(c), of the department of epidemiology at the Chinese Academy of Medical Sciences and Peking Union Medical College, tea is a rich source polyphenols. Polyphenols, he told Runner’s World are an antioxidant that has been shown to relieve inflammationand improve cell function in the heart and blood vessels. This, in turn, can prevent against heart disease and stroke.

While green tea contains more polyphenols than other types of tea, people can still reap the benefits from other types, such as black tea.

Although the results for other types of tea weren’t as significant as green tea, this could be because a majority of the study’s participants likely drank green tea more regularly since it’s common in Asia, according to Wang.

“By contrast, black tea is popular in European countries, and was found to be associated with reduced risks of stroke and coronary artery disease in the Netherlands, Finland, and Sweden,” he said.

Keep in mind, adding milk or sugar to your tea could lessen tea’s advantages. A 2007 study in the European Heart Journal found that milkcounteracted the health benefits of tea on blood vessel function. Plus, consuming too much sugarper day could lead to poor heart health as well, according to the American Heart Association.

[Stay injury free on the road by getting on the mat with Yoga for Runners.]

It’s also worth noting that while the heart-healthy benefits of tea were more pronounced in men in Wang’s study, there are two possible reasons for why that could be: First, men consumed about 2.5 times more tea in their daily lives than women did. Second, women usually have a lower incidence and mortality of atherosclerotic cardiovascular disease in China and East Asian countries to begin with.

“Investigations of the China-PAR project are still ongoing, and with larger total person-years of followup among women, the results will become more pronounced and reliable in the further studies,” Wang said.

The bottom line? Adding tea into your diet—whether you use it to get you going in the morningor help you wind down at night—can keep your heart healthy enough to run and live your best.