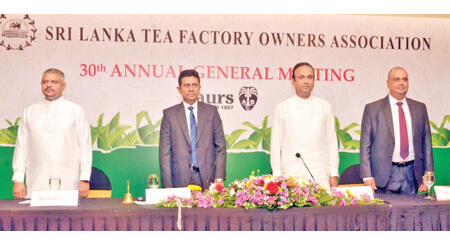 Sri Lankan government spent nearly Rs. 6 million towards a tea plant nursery and the tea seedlings will be ready from next year said Minister of Plantations, Dr. Ramesh Pathirana.

He was speaking at the30thAnnual General Meeting of the Sri Lanka Tea Factory Owners Association (SLTOA) as Waters Edge on Saturday where Chairman Deniyaya Dampahala Tea Factory, Chandima Wickramasinghe was elected as the President.

The Minister said that these seedlings would help to replace aging tea plants and will help to increase production. He also said that already more tea fertilizer had been issued than the previous years.

He however said that the government would be very tough on tea factories that don’t manufacture quality tea. “We have sadly observed that several substances have been unfairly added to tea to bring down the quality and stern action would be taken against them,” stated the Minister.

Minister said that new innovations too should be looked in to like making specialized tea which he said would be the future. State Minister of Company Estate Reforms, Tea Estate Related Crops, Tea Factory Modernization and Tea Export Promotion, Kanaka Herat also endorsed this. He said that in addition several new credit schemes too would be formulated to bail out the aligning tea factories. The newly elected President of SLTOA Wickramasinghe said that locally manufactured Green tea and CTC teas are neglected due to the cheap imports.

“If the imports are permitted to be continued, the closure of these specialty tea manufacturing factories is inevitable. The large investments in these factories, machinery and equipment will be a colossal loss,” he continued.

“We appreciate the Sri Lanka Tea Board initiatives in granting a Working Capital Loan releasing Rs.500 million to factories to overcome the cash flow difficulties. It was a great relief and we trust the recoveries via the Commercial banks will not leave any bad debts. The year under review has been an incredibly a challenging year and all predictions and indications for year 2020 don’t look attractive, “elaborated the President.

“The initiative to establish solar power units by the Tea Board on tea factories is successful. The project should cover all tea factories. This initiative will make factory owners to participate on the green energy concept spearheaded by the President,” he said.

“We will experience a lower tea production compared to year 2019. “Recurring droughts, extreme monsoon rains, high soil temperatures have been attributed for significant crop decline,” the President said in conclusion.

Priority must be given for replanting/new planting and infilling. Availability of good quality plants from the newly developed cultivars is essential. The long process of establishing mother bushes and obtaining cuttings for nurseries will slowdown replanting to a low number of plants.