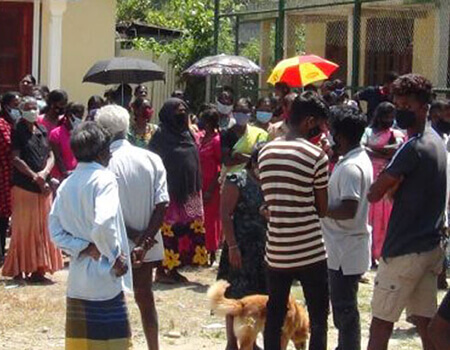 The delay in resolving the ongoing plantation worker wages dispute has triggered sporadic violence in estates and the companies are seeking the intervention of President Gotabaya Rajapaksa and Prime Minister Mahinda Rajapaksa.

Planters’ Association of Ceylon secretary general, Lalith Obeyesekere, told the Sunday Times intervention had been sought to halt the violent incidents against the management of regional plantation companies.

He said a couple of incidents had been reported in recent weeks and strong legal action should be taken against suspects.

In a statement, the Association condemned a brutal mob attack, in which two more Regional Plantation Company (RPC) employees ended up hospitalised in critical condition.

“This is now the third instance this year alone where the lives of RPC employees have been placed in serious and immediate danger. We are concerned that an organized campaign of violence and intimidation is being unleashed by thugs who are inciting workers and non-workers in order to sabotage RPC tea production.

“We wonder how such a catastrophic breakdown of law and order is being allowed and why no meaningful action has yet been taken against those who are inciting violence on the estates,” the statement quoted Mr Obeyesekere as saying.

The association said that in one of the incidents at Alton Estate in (Upcot Maskeliya), workers while avoiding work, ganged up to block factory operations, resulting in a total of 7,000 kilograms of green-leaf plucked before the strike, being declared as wasted and thrown away.

They also forcibly prevented a consignment of tea, ready for dispatch and to be sold at auction, from being transported out of the factory. The entire consignment, valued at Rs 6 million to an international buyer was already paid for. The company, legally obligated to complete the transaction, filed a police complaint, the statement said.

The statement declared that trade union sponsored vandalism and arson was becoming systemic, with worker gangs breaking into and damaging homes of managers, destroying furniture and personal belongings, disconnecting water and electricity supply to factories and physically assaulting the managers, assistant managers and their families.

“We believe that these violent attacks are not simply a response to particular issues on a given estate; rather an organised campaign to destroy the plantations, its crop and the income derived from it. Whoever takes responsibility, should know that the end result will be a loss to the country,” the statement said.

The Sunday Times learns that in one incident, workers had also poured cow dung mixed water on the manager and assistant manager of one of the estates.

In a separate incident, unrelated to the wages issue, an assistant superintendent was allegedly assaulted by Ceylon Workers Congress (CWC) member of Parliament M. Rameshwaran, over allocation of land for a housing project. A complaint has been filed with the police.

When contacted by the Sunday Times, Mr Rameshwaran, declined to comment.

Meanwhile, Commissioner General of Labour, Prabath Chandrakeerthi told the Sunday Times the minimum wage would have be gazetted later, as the collective agreement, which also involves trade unions and companies, ends only at the end of the month.

“We cannot intervene about the incidents reported. It is beyond our control,’’ he said.

Also, the former deputy plantations minister P. Radhakrishna, said the government should set an example by granting the wage increase to workers of state-owned plantation companies – State Plantation Corporation and the Janatha Estate Development Board.